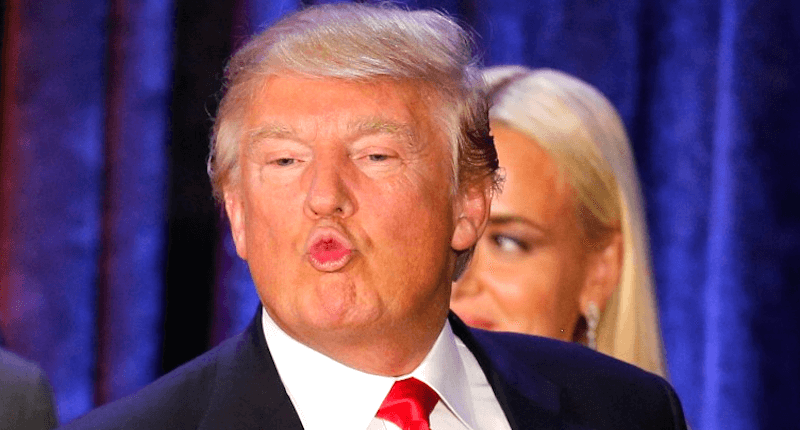 Alas! One week of President Trump and well let’s just say “Hail!” to Trump for having the power of Executive Orders! Trump has been successful in a lot of things given his first week, from day of his bigly and yuge inauguration filled with millions of people far more than those of the former President Obama’s inauguration crowd size, to him bringing millions of people in unity aka “The Women’s March” that made history as the largest protest or movement in the United States and also to all of his executive orders and actions like the most recent issuing of an executive order limiting immigration from several Muslim countries to protect the American people and enhance globalization, to bring peace and unity, eradicate fear and segregation, President Trump might just well have a chance to stand to be one of the greatest Presidents the U.S has ever experienced! We the people are pleased and happy because this is what new-democracy looks like especially in a Brexit-Trump universe! How Marvelous!

Here are all the actions of President Trump in his first week as expected to be reported, read up with your discretion:

WITHIN HOURS OF HIS INAUGURATION: President Trump moved to protect Americans from ObamaCare, government regulations, and future bailouts. (As to be reported/ATBR)

ATBR Action: On the evening of his Inauguration, President Trump sought relief for Americans from the cost burdens of ObamaCare.

Effect: Even though that might eventually leave millions uninsured. It has no much immediate impact unless via further actions by the new Health Secretary and individual states. it’s more likely going to influence how Congress proceeds with its repeal efforts.

ATBR Action: Through a memorandum issued by the Chief of Staff, all new regulations were frozen to protect job creators from the crush of new government rules on their businesses.

Effect: The action from White House chief of staff Reince Priebus delays all regulations with the exception of health, safety, financial or national security matters allowed by the Office of Management and Budget director.

ATBR Action: President Trump put a stop to a reckless action that would have reduced funding for the Federal Housing Authority after it was bailed out by the taxpayers as recently as 2013.

MONDAY
President Trump fulfilled his promise to immediately address trade and jobs by withdrawing from the harmful Trans-Pacific Partnership, put in place a hiring freeze, and protected taxpayer money from funding abortions overseas. ( As to be reported)

Effect: The TPP was like a legacy of the former President Obama on the U.S international trade policies, a deal he signed with 11 pacific nations. The effect is immediate meaning that the decision to formally “withdraw” is to end ongoing international negotiations and let deals wither. The Trump administration says it plans on negotiating bilateral deals with individual nations.

ATBR Action: To stem the tide of an ever growing government, President Trump put in place a hiring freeze on federal civilian employees.

Effect: A hiring freeze is immediate, and is expected to last 90 days with exceptions under broad categories, including military, public safety, as well as case by case exceptions by the Office of Management and Budget. Remember During his campaign, he frequently railed against government bureaucracy, and vowed to “drain the swamp” of corrupt governance.The directive is part of Trump’s effort to reduce government debts and decrease the size of the federal workforce.

Effect: What’s called the Mexico City policy, first implemented in 1984 under Republican President Ronald Reagan places a ban critics refer to as “global gag rule” preventing foreign NGO’s that receive cash from the U.S from providing abortion related support or services in their country. This policy comes into force as soon as the Secretaries of State and Heath write an implementation plan and apply to both renewals and new grants. Anti-abortion activists expected Mr Trump to act quickly on this – and he didn’t disappoint them.

TUESDAY
President Trump promoted job creation by jumpstarting the construction of two new energy pipelines, requiring the use of American-made materials and equipment in building those pipelines, and reduced the regulatory burden on America’s manufacturing and construction industry. (As to be reported)

ATBR Action: President Trump began the process to finish construction on the Dakota Access Pipeline after a series of delays. After years of delays, President Trump signed a presidential memorandum to revive the Keystone XL pipeline. To make sure Americans benefit from infrastructure projects, the President signed an executive memorandum requiring all new construction and repair of pipelines to use American materials and equipment.

Effect: Two controversial pipelines, the Dakota Access Pipeline and Keystone XL Pipeline. The DAPL action instructs an expedited review and approval of the remaining construction and operation of the pipeline by the Army for Civil Works and U.S. Army Corps of Engineers. The Keystone XL action invites TransCanada, the Canadian energy company behind the pipeline, to re-submit its application for a presidential permit to construct the pipeline. It also instructs the Secretary of State to reach a final determination within 60 days. Keystone, a 1,179-mile (1,897km) pipeline running from Canada to US refineries in the Gulf Coast, was halted by President Barack Obama in 2015 due to concerns over the message it would send about climate change.The second pipeline was halted last year as the Army looked at other routes, amid huge protests by the Standing Rock Sioux Tribe at a North Dakota site.
ATBR Action: President Trump ordered the Commerce Department to streamline and reduce regulations affecting U.S. manufacturing to help bring factories back to America. To jumpstart much needed infrastructure projects, President Trump signed an executive order to speed up the environmental impact review of projects.
Effect: The action instructs the Chairman of the White House Council on Environmental Quality to create expedited procedures and deadlines for environmental reviews and approvals for high-priority infrastructure projects.

WEDNESDAY:
President Trump followed through on his pledge to protect America’s borders and end the lack of compliance with immigration laws. (As to be reported)

Effect: Plans for wall along U.S.-Mexico border, Create a list, updated weekly, of crimes committed by undocumented immigrants in sanctuary jurisdictions, Sanction countries, with the help of the secretary of state, that refuse to accept the return of undocumented immigrants deported from the U.S. Create an “Office for Victims of Crimes Committed by Removable Aliens” to “provide proactive, timely, adequate and professional services to victims of crimes committed by removable aliens and family members of such victims”. Reinstate the Secure Communities program, which was terminated in 2014 and enables state and local law enforcement to effectively act as immigration agents. Hire 10,000 additional immigration officers at U.S. Immigration and Customs Enforcement. Take action to empower state and local law enforcement to act as immigration officers. Prioritize certain undocumented immigrants for removal, including those with criminal convictions and those who have only been charged with a crime. Hire 5,000 additional Border Patrol agents, End “catch and release” policy, Quantify all “sources of direct and indirect Federal aid or assistance to the Government of Mexico on an annual basis over the past five years” Prohibit federal funding, with the help of the attorney general, to “sanctuary” jurisdictions, where local officials have declined to help enforce federal immigration laws, Construct and operate detention facilities near the border to make adjudicate asylum claims.
FRIDAY
President Trump followed through on his top priority to keep America safe. (As to be reported)

Effect: From the executive orders Trump signed on Friday evening, it means there are significant changes to the visa and refugee programs in the United States. Effects are as follows: The number of refugee allowed into the United States in fiscal 2017 is cut from 110,000 to 50,000. The U.S. Refugee Admissions Program, which identifies and processes refugees for resettlement in the United States is Suspended for 120 days, also suspends the entry of all “immigrants and nonimmigrants” from Iraq, Iran, Sudan and Libya for a period of 90 days. This may also apply to citizens of Libya, Yemen and Somalia depending on the interpretation. Bars all Syrian refugees for an indefinite period. Directs the secretary of homeland security, the director of national intelligence and secretary of state to put together a list of countries that do not provide adequate information to vet potential entry of foreign nationals into the United States. Foreign nationals from those countries will be banned from entering the United States. Secretary of state, the secretary of homeland security, the director of national intelligence, and the director of the FBI will implement uniform screening standards for all immigration programs. Secretary of homeland security, upon the resumption of the U.S. Refugee Admissions Program, is directed to “prioritize refugee claims made by individuals on the basis of religious-based persecution, provided that the religion of the individual is a minority religion in the individual’s country of nationality.” The secretary of homeland security to implement a biometric entry-exit tracking system. Grants state and local jurisdictions, whenever possible a “role in the process of determining the placement or settlement” of refugees. Suspend the Visa Interview Waiver Program, which allows certain people renewing their visas to skip an in-person interview. Directs the secretary of state to expand the Consular Fellows Program.

ATBR Action: President Trump issued a presidential memorandum to direct the Secretary of Defense to review our readiness and create plans to rebuild the U.S. military.
Effect: The president issued on Friday a presidential memorandum directing the secretary of defense, James Mattis, to conduct a review on the military’s readiness in the next 30 days and develop a budget for fiscal 2018 capable of improving the “readiness conditions.” He also directed Mattis to complete a National Defense Strategy and to review the country’s nuclear capabilities and missile-defense capabilities.