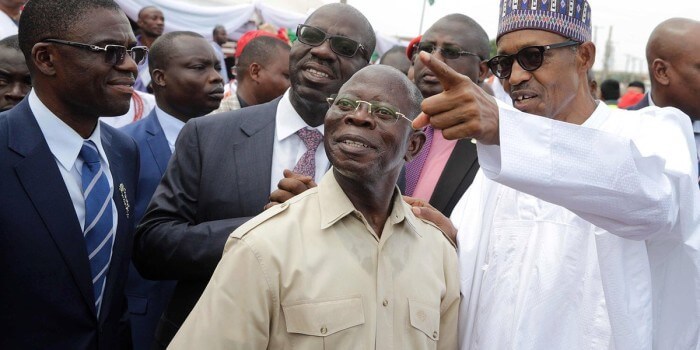 This report is part of an investigation by Caracal Reports, who received a petition and financial documentation from government sources who wish to remain anonymous. The documents reveal misappropriation and corruption by the Oshiomhole administration.

The immediate past Governor of Edo State, Adams Oshiomhole may soon be the guest of the Nigerian anti-graft agency, The Economic and Financial Crime Commission (EFCC). (Unsurprisingly, former Governors end up as regular guests of the anti-graft agency.)

This news comes on the strength of a strongly worded petition to the Agency, which was made exclusively available to Caracal Reports in Benin City, Edo State Nigeria. Caracal Reports will be monitoring the petition and will keep the Nigerian public and international community abreast of further developments in the case.

The petition raised several issues bordering on allegations of fraudulent practices, misappropriations, financial misapplications and embezzlement through contract splitting and outright racketeering. Authors of the petition, Comrade Kola Edokpayi of the Talakawa’s parliament, and Bishop Dr. Osadolor Ochei, J.P of the Achievers Organisation who are renowned “Rights Activists” in the state, are pushing their self-imposed course under the aegis of the ‘Group of Concerned Edo NGOs and Stakeholders’.

The petitioners say they were compelled to act because they believe that the people have not only been short-changed through fraudulent means but also that their commonwealth has been frittered away by an administration led by a pretentious “Comrade” Governor.” Throughout his eight-year tenure, the Governor claimed to be judiciously spending the taxpayers’ money for the people’s welfare, but he was doing anything but this.

Pouring through the various transactions that we had access to on the Oshiomhole Administration, we found shocking behavior that amounts to what January 28, 2017, Nigerian Vanguard blazing banner headline described as “How State Governments waste money.”

Against the backdrop that Oshiomhole was one of those at the forefront of his All Progressives Congress (APC) party’s fight against corruption, the records show profligacy of monumental proportion. Throughout his tenures, Oshiuomhole seemed serious about accountability and was quite noisy about it, but from available records, the reverse was just the case.

According to the Debt Management Office, Edo state Government the petitioners averred, is the third highest indebted state in Nigeria and from documents available to Caracal Reports, a significant part of the borrowed funds were diverted by the Governor to his private use and those of his cronies. In the former Governor’s eight years tenure, he obviously plundered the resources of the state and diverted billions of the state’s revenue to his personal account using proxies. 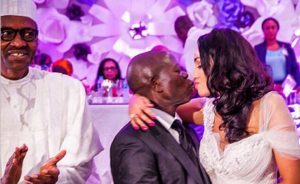 In the face of the current biting recession in Nigeria, Oshiomhole used government funds for his lavish wedding. Furthermore, the former Governor spent the peoples’ money on chartered flights, which were excessive and hypocritical in an administration that claimed to be prudent in the management of the resources of the state. Oshiomhole’s chartered flights amounted to N5 billion.

Caracal Reports is providing herein examples of Oshiomhole’s fraudulent practices, which were asserted by the accessed documentation.

Routes: Iyamho-Evbuobanosa-Benin-Evbuobanosa-Iyamho.: N4,900,000. Iyamho happens to be where his country home is located and his birthplace.

One Cpl. Fayenmwo Bright, a Chief Security Officer (CSO ) orderly signed as receiver of the fund on 16 June 2014.

The attached letter of request for the fund, which has, files No. GHA. 171/T vol. DL/64-67, signed by the Permanent Secretary, Government House, B.l. Emoedume (Esq) on 12 June 2014 gives a breakdown as follows;

From the records, the former Governor approved the release of these funds on the same day it was requested (12/6/14).

Nobody signed as the receiver on this fund except for the stamp of Secretary to the State Government appearing for the signature of the officer controlling expenditure.

This obviously is a duplication of a previous payment voucher which Cpl. Fayenmwo Bright, (CSO) orderly signed as a receiver a pointer to a fraud.

The former Governor gave his approval on the same day 16/4/14.

The breakdown is as follows:-

The former Governor Adams Oshiomhole approved the funds on the same day, 21/11/12, the request was made

Cpl Fayenmwo Bright, the Chief Security Officer (CSO) to the Governor signed as receiver of the said fund.

Letter of request for the funds originated from Permanent Secretary, Government House and Protocol, B.i. Emoedume (Esq), dated 17/7/14 and with file NO. GHA. 171/T2A/83-88 gives the breakdown as follows:

In all of these, a major question to be raised is, were these flights operated, or that due vouchers were merely raised as outlets for siphoning cash from the Government’s purse? What is even more curious is the fact that, Nigerians are aware of Aero Contractors and Bristow Airlines that operate fixed wing choppers.

The names of the chopper airlines in the vouchers approved for money disbursements are new, unknown to Nigerians and suspicious as not being authentic. Could the charter airlines be private choppers owned by politicians or even the Governor himself?

Another fact is that the distances that the chartered choppers covered were distances a more prudent Governor could have used his convoy fleet of Jeeps and SUVs at far, far lower costs.

While the appetite of Comrade Oshiomhole is to fly over the people at huge costs, there is yet more to be seen from contract award splitting and the racketeering game of Adams Oshiomhole.

The third batch of this publication will include in detail contract documents inflated to cost twice or thrice as much the market prices.