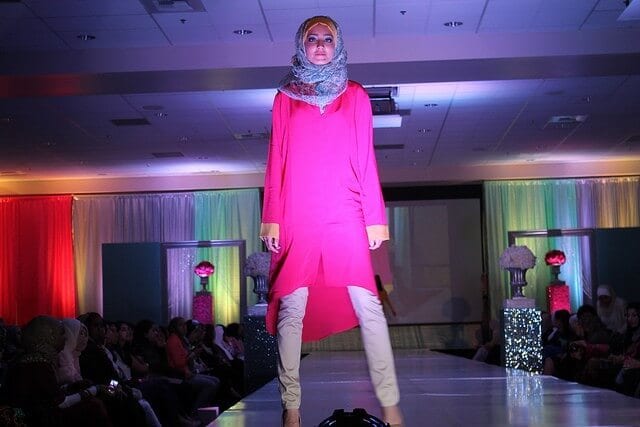 There is a bold new trend in fashion, and it’s not the #FreeTheNippleMania. Quite the opposite, in fact.

Last year, Anniesa Hasibuan made history in the fashion world when she featured an entire collection of hijab wear at New York Fashion Week. This year Hasibuan is making history once again by having her second collection feature immigrant-only models or second-generation children of immigrants.

In a world where fashion designers are always trying to find the next boldest thing, women are working on bringing a traditional side to style. These Muslim women are breaking barriers to express how fashion is limitless.

After all, who says modest can’t be fashionable? Many designers are now presenting fashion lines that integrate the hijab, djellaba, and wedding styled kaftan; beautiful dresses created by powerful, humble, religious Muslim women.

“I’m here bringing the beautiful voice of the Muslim women, the peace and the universal values that fashion can offer,” said Anniesa Hasibuan.

At the same time that these fashion shows and trends are expressing unprecedented diversity, they are also combatting the oppression women face in Islamic culture.

Society should be so proud of these women. In Muslim culture, women are shunned for defying the Islamic law. And yet these models can stand tall and fight for the ability to express their beauty.

However, religious conservatives have criticized the fashion show, arguing that it defies Islamic law.

Last year a fashion show in Turkey became especially contentious after protestors voiced the disgrace of wearing the Hijab as an accessory and not for what it truly means.

Conservative Muslims believe that the hijab is a symbol of respect for the husband and oneself, as well as the wearer’s connection to her beliefs and religion.

The women participating in the fashion shows are showing younger girls that they too have a choice to accessorize with the hijabs and that it does not defy their respect for themselves or their religion.

The modest fashion trends and their associated controversies speak to much broader, dynamic global problems.

There’s the issue of religion and secularism. Can a style of clothing have inherent religious meaning, but at the same time represent a cultural symbol to be celebrated for its uniqueness and beauty?

Then there’s the issue of incorporating more diversity in an industry that otherwise lacks this. Will the introduction of Muslim attire shift the fashion industry’s definition of what constitutes beautiful?

Finally, there’s the problem of widespread political conflict and animosity between the Muslim world and everyone else. Could the modest fashion have any positive impact on this?

What we do know is that the powerful and bold women at the forefront of the modest fashion trend are not stopping anytime soon.