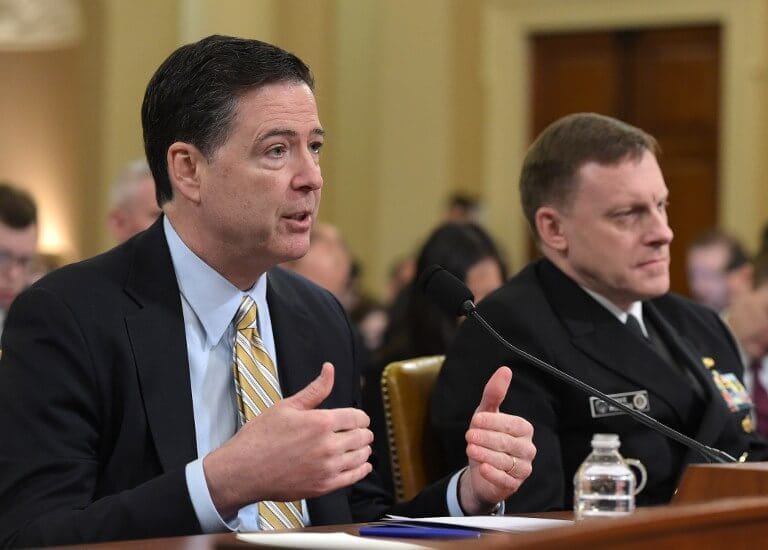 Comey publicly confirmed for the first time that the F.B.I. has had an ongoing investigation looking at the Trump Campaign’s relationship with Russia during the 2016 presidential election.

“I have been authorized by the Department of Justice to confirm that the FBI, as part of our counterintelligence mission, is investigating the Russian government’s efforts to interfere in the 2016 presidential election and that includes investigating the nature of any links between individuals associated with the Trump campaign and the Russian government and whether there was any coordination between the campaign and Russia’s efforts,” said Comey.

The second reveal is that Comey confirmed that there’s no evidence to support Donald Trump’s claim via Twitter on March 4, 2017 that former President Obama had Trump Tower.

Both statements are damning to the Trump Administration, who has proclaimed their innocence after reports surfaced that members of their administration and campaign worked with Russians during the 2016 election. The White House has also stood by President Trump’s tweets that the Obama Administration was involved with surveillance of Trump Tower.

During the hearing, the President’s official @POTUS handle sent out misleading tweets: “The NSA and FBI tell Congress that Russia did not influence electoral process.”

Later the Twitter handle linked to a video of Rogers telling the panel that “unmasking individuals endangers national security.”

This spin backfired when, during the same hearing, a Congressman asked Comey about the assertions in the @POTUS Twitter handle and the F.B.I. rebutted the White House: “It certainly wasn’t our intention to say that today.”

The implications made by Comey that the Trump Administration was being investigated by the F.B.I. was seemingly lost on the conservative lawmakers in the hearing who focused on the limitations of the testimony and the leaks made to the press about the investigation.

At Press Secretary Sean Spicer’s Press Conference, the White House distanced themselves from the members of the campaign General Michael Flynn and the Campaign Chairman Paul Manafort, both of whom were removed from Trump’s inner circle for their links to Russia:

“General Flynn was a volunteer [for] the campaign. Obviously, there has been some discussion of Paul Manafort, who played a very limited role for a very limited amount of time,” Spicer said.

This distance is an obfuscation of the truth, particularly in Manafort’s case. Manafort was hired by Trump in March 2016 as a consultant and was promoted to run the campaign around mid-June after the firing of Corey Lewandowski. Manafort resigned from his post in August after the Republican National Convention and as more information was revealed about his connections to the Pro-Putin Ukrainian government.

The revelations at this hearing are just the beginning of a political firestorm far greater than what we have seen to date. Although at this point we know very few details about the investigation, what we do know is that most officials, including Trump’s inner circle, also know very little.

The White House can continue to create its own narrative as much as they want, but the investigation will continue, and the FBI won’t be stopped by tweets.