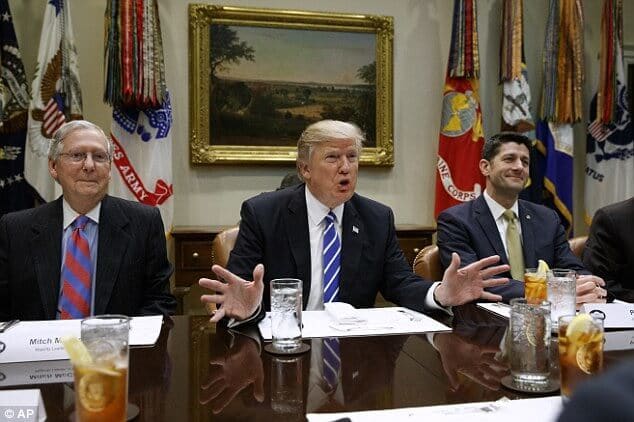 Trump and the GOP's failed attempt to promote the repeal of Obamacare. (AP Photo).

Today marks the 64th day of Trump’s presidency, and also the end of the President’s worst week ever.

Let’s start with the most brutal blow. White House and Speaker of the House Paul Ryan failed to bring a vote to repeal and replace Obamacare with the American Health Care Act.

Finally, more information is coming out about the Trump administration’s links to Russia.

Today, Republicans failed to bring a vote to the floor in their attempt to repeal and replace Obamacare. The failure is a blow to the administration because it’s been a major promise on the campaign trail both by Trump and Republican lawmakers for the last 7 years.

In the end, the American Health Care Act was a dud, and was pulled at the request of the President at the last minute both on Thursday and Friday. On Friday, Speaker of the House Paul Ryan (R-Wi.) briefed President Trump that they didn’t have enough votes, and they both decided to pull the bill.

The AHCA was panned by Democrats for threatening to lose people’s health care, and some Republicans – the more conservative Freedom Caucus – saying it’s too much like Obamacare.

The larger story is that this is the first time that President Trump had the chance to cut a deal with the political class of Washington. His failure to do so is a blow to the br

and and promises made on the 2016 campaign trail.

Now, the administration and Speaker Ryan are planning to move on from Health Care, keeping in place Obamacare as the “law of the land.”

Neil Gorsuch was nominated by President Trump to fill the vacancy of the late Justice Anthony Scalia. This came after the Republican Senate Leader Mitch McConnell (R-Ky.) refused to sit down with President Obama’s pick, Merrick Garland throughout the last year of his presidency.

Republicans, however, have made time to meet with Gorsuch, who’s charmed conservative lawmakers with folksy mannerisms, and evaded tough questions from dissenting Democrats.

On Thursday, Senate Minority Leader Chuck Schumer (D-Ny.) said that the Democrats were going to filibuster Gorsuch’s nomination, which needs 60 votes to pass. Filibuster means that the Democratic politicians are going to talk until the nominating vote is indefinitely delayed or quashed entirely.

Republicans are the controlling party in the Senate and therefore have the option to “go nuclear” and change the rules and allow the nominating vote to go from 60 votes to 50 votes, and pass it with 52 Republicans.

The Latest on the Russia Investigation

House Intel Committee Co-Chairman Devin Nunes (R-Ca.) is leading a bipartisan investigation into the connections between the Trump Campaign and the Russian government, but this week, he circumvented impartiality to get in the good graces of the president.

When receiving a report from an unnamed source Wednesday, Nunes went first to Speaker of the House Paul Ryan, and then to the White House to brief President Trump of the report that there was incidental wiretapping of members of Trump’s transition team.

This move was widely criticized by liberals and some conservatives like Rep. John McCain (R-Az.), who doubled down on calls for an independent prosecutor into the Trump’s campaign during the 2016 election.

In related news, an AP report said that Trump’s former campaign chairman Paul Manafort worked for a Russian billionaire Oleg Deripaska with a plan to “greatly benefit the Putin Government.”

On Friday, Nunes announced at a press briefing that Manafort had agreed to testify before the  House and Senate Intelligence Committees as part of their investigations into Russia’s meddling in the presidential election.

This has certainly been a disastrous week for Trump, and it’s only day 64.