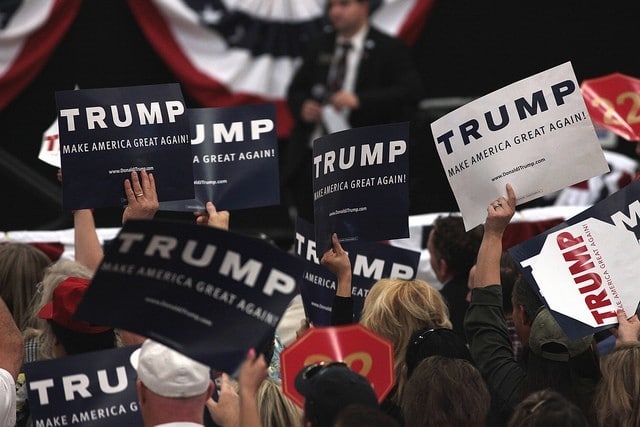 Photo by Gage Skidmore/ CC BY

Reaction in America to President Trump’s attack on a Syrian military airfield has shown a divided country on the topic of foreign relations in respect to the Syrian Civil War, which has raged for the past six years.

His most extreme supporters on the far right are feeling betrayed after believing that they voted to keep the country out of needless foreign aggression, while members of the mainstream media and Warhawks on both sides of the establishment aisle are lining up to back the Trump’s show of strength.

The attack comes after Trump campaigned promised rigorously to break with Bush, Clinton, and Obama administrations on the use of foreign intervention, particularly in the Middle East; Trump’s America first” policy. It also comes as Trump has aggressively moved to disallow Syrian refugees into the United States.

This has left Trump’s most ardent supporters – members of the far right – fuming. Many of them have come out vocally against the attack, charging that he betrayed the promise during the campaign not to meddle with wars in the Middle East.

“I guess Trump wasn’t “Putin’s puppet” after all, he was just another deep state/Neo-Con puppet,” tweeted Paul Joseph Watson, an editor at the conspiracy theorist site Infowars, “I’m officially OFF the Trump train.”

Outspoken white nationalist Richard Spencer, who gained some notoriety last year when he was expelled from CPAC and punched in the face during a rally, called it a betrayal:

“What Trump did was nothing less than a betrayal, a betrayal of his supporters, of his message ‘America First!,’ of his promise to be different—to learn from the mistakes of the past and chart a new course,” said Spencer, who then posted support for Hawaiian Democratic Congresswoman Tulsi Gabbard, who is the first American lawmaker to meet with Assad.

Critics on both the left and right pointed to Trump’s former statements about Obama’s handling of Syria, particularly tweets where he chastised the president for attacking Syria without first getting congressional support, and this tweet:

“AGAIN, TO OUR VERY FOOLISH LEADER, DO NOT ATTACK SYRIA – IF YOU DO MANY VERY BAD THINGS WILL HAPPEN & FROM THAT FIGHT THE U.S. GETS NOTHING!”

Here’s a link to all the instances of Trump criticized Obama for attacking Syria, courtesy of the Miami Herald.

Media Pundits and Warhawks Line Up in Support

Trump has found a rare line of support from mainstream media pundits and moderate politicians on both sides of the aisle. Not surprisingly, the mainstream media offered little critical and opposing views; this includes opinion pieces.

On MSNBC, Brian Williams applauded videos of the strikes as “beautiful” and CNN’s Fareed Zakaria said that it was the moment that Trump became president. These pundits are part of the organizations that the Trump Administration has been at war with since the beginning of the campaign, and Trump has regularly called them “fake news.”

This support comes as tensions between Russia and the United States heats up, and U.S. Ambassador to the UN Nikki Haley said that the U.S. is “prepared to do more.”

Other Congressmen have been critical of Trump like Republican Rand Paul (Ky.), who tweeted: “While we all condemn the atrocities in Syria, the United States was not attacked,” and called the attack “unconstitutional.”

While the attack in Syria doesn’t, at first, point to an attempt to topple Bashar Hafez al-Assad’s regime, it does show Trump’s sudden and newfound willingness to punish Assad for provocations that don’t directly involve American forces.

Only days before the attack, Trump seemed willing to let the Assad regime remain in power, but following a chemical attack that killed over 80 people including 20 children, reportedly by Assad, Trump made a one-eighty reversal and put together an attack in retribution.

The reality, though, is that in the past six years of the Syrian Civil War, an estimated 400,000 civilians have been killed. But the mainstream media doesn’t report on this. Then it takes a chemical attack to bring awareness, and the public thinks this is something new.

Then, afraid of being perceived as “weak”, the establishment attacks, and the media reacts with praise.