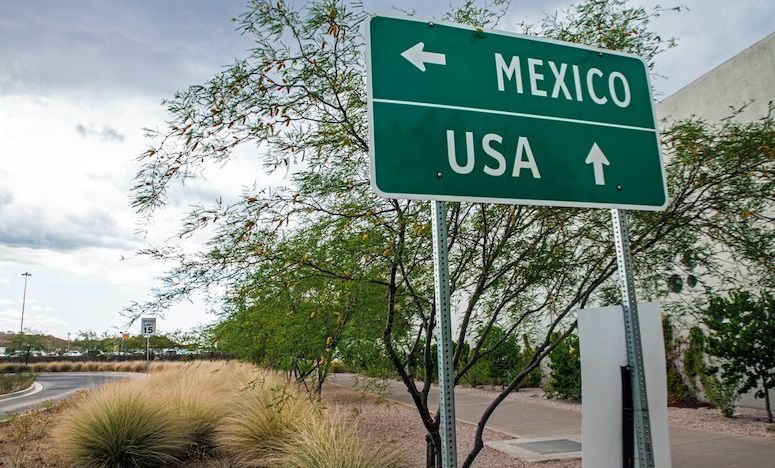 Trump’s Mexican border wall fantasy is yet another failed campaign promise as the President and Senate Republicans have signaled a backtrack on adding funding for the border wall in this year’s spending bill. This is just one of many examples of the administration’s continued difficulties to follow through with any of its campaign promises.

Last week, the administration was insistent that funding for the very expensive and divisive border wall was needed in the spending bill. That immediately set up a preemptive standoff between Democrats and Republicans which threatened to shut down the government if either side refused to budge.

“Building that wall and having it funded remains an important priority to him but we also know that that can happen later this year and into next year, and in the interim you see other smart technology and other resources and tools being used toward border security,” Trump counselor Kellyanne Conway said on Fox News on Tuesday.

One of the divisive promises on the campaign trail, the southern border wall elicited chants from supporters, while Democrats dismissed it as impractical and expensive. When confronted with a question about the wall, Press Secretary Sean Spicer vehemently denied that the wall’s development was being delayed:

“Yesterday, President Trump reportedly said that he’s going to delay pushing the wall through. Can you just clarify what the status is?” Associated Press reporter Vivian Salama asked Spicer at his daily briefing.

“I think he tweeted about this earlier,” Spicer replied. “His priorities have not changed. There will be a wall built.”

Spicer said that there is “plenty of planning that can be done” in the current fiscal year.

“Our priorities are clear going into FY17, the remainder of budgeting for that, and we’ll continue to ask for more in FY18,” Spicer said, referring to fiscal years 2017 and 2018.

Spicer was referring to the President’s tweet where he alleged that the press about the wall was “fake news”:

“Don’t let the fake media tell you that I have changed my position on the WALL. It will get built and help stop drugs, human trafficking etc,” he tweeted. 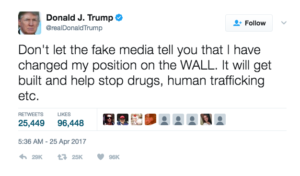 The President and Spicer’s political doublespeak on the wall has become commonplace for a young administration that has had a difficult time saving face when components of their restrictive immigration agenda has been blocked by other branches of government.

The first part of the agenda that fell through were the two proposed travel bans on predominantly Muslim countries, which was stayed, first by a judge in Washington, and then by a Hawaiian judge.

Another point of the immigration agenda that met resistance from the judicial branch is Trump’s executive action to withhold funds from sanctuary cities, a penalty that was suppose to punish cities that limit their cooperation with the national government in order to help people who are in the country illegally avoid deportation.

On Tuesday, Judge William H. Orrick, a judge from San Francisco’s United States District Court  wrote that the President had overstepped his bounds tying up billions of funds in immigration enforcement, and said that only Congress could place conditions on spending.

“If there was doubt about the scope of the order, the president and attorney general have erased it with their public comments,” Judge Orrick wrote.

In related news, a new study found that illegal immigrants fell to an all-time low under President Barack Obama, which begs the question to the current administration: what exactly is the reason for these stricter immigration laws other than racism?