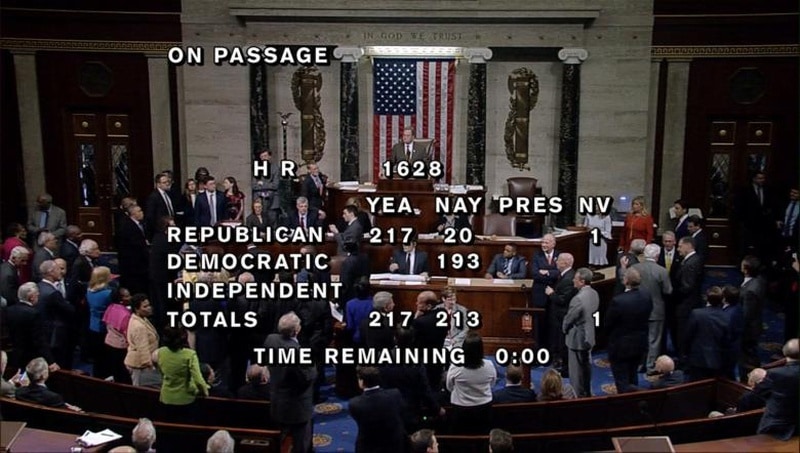 Before Thursday’s vote to replace Obamacare with the American Health Care Act (AHCA), House Democrats have been floundering to find something to attack their Republican counterparts that will connect with the average voter.

Now, Democrats don’t have to look any further than the Health Care vote for ammunition in the 2018 midterms. Yesterday, after the 217-213 passing, the minority party took to mockingly singing the “sha-na-na-na hey hey goodbye” song in celebration of their political foes yet-to-be-seen downfall.

But liberal lawmakers should be wary of a premature celebration of their potential political victory. They simply have not won anything yet, and there’s no indication that there will be any consequences for the Republican congressmen who voted for the unpopular bill’s passing.

The Struggle for Obamacare’s Legacy

For years, Republicans have successfully run on an agenda that was based on repealing Obamacare. The act was extremely unpopular in the conservative parts of the country, and Democrats had a tough time defending it. Throughout Obama’s term, Republicans won both the majorities in Congress and the Senate after Democrats struggled to turn out votes for the 2010 or 2014 midterms as a result of Obamacare.

Now, with the AHCA’s passing, Democrats are eying down using similar tactics for political payback. For the 2018 midterm, their platform is going to read like a parody of the Republicans’ midterm platform: “repealing and replacing Obamacare is taking life-saving care away from the most vulnerable in the name of politics, and you should vote them out of office.”

This may be true. And while the Congressional Budget Office’s score on this draft of the bill hasn’t come out, if the last draft showed that 24 million people will lose health care as a result of its passing, it’s a fair guess to say that somebody is going to be losing life-saving healthcare, and it’s more than likely going to be the people who voted Trump into office.

If the Democrats have a weakness, it’s turnout. While President Trump’s election has shown an outpouring of political activism and engagement, these are not necessarily indicators of votes, especially for midterm elections, which slip in under the shadow of the presidential elections.

An Opportunity for Democrats to Stand Against Something

That’s not to say that the vote wasn’t politically risky for Republicans. Senate Republicans have already signaled that the hastily cobbled together bill is more-than-likely dead on the floor of the Senate, despite the president’s insistence, and that adds some more fuel to the Democrat’s condescension.

It’s also not to say that Democrat’s condescension isn’t a realistic goal. Already, liberal-leaning websites like Mother Jones and Slate published “hit-list” articles identifying and targeting the vulnerable Republicans who voted yes for the unpopular bill (despite most of them not having time to look at the bill).

However, Democrats, save the celebration for when there’s an actual victory to celebrate. There’s a lot of work to do before that happens, and Democratic impotence at stopping a Republican controlled House from steamrolling over any opposition is hardly a time for singing songs

This is a very real opportunity for Democrats to capitalize on blatant partisan tomfoolery at the expense of the American people. It gives them an opportunity to stand against something substantive that’s not just whatever Trump tweeted about. Harnessing that opportunity takes work, a clear message, organization, and, most importantly, turnout.