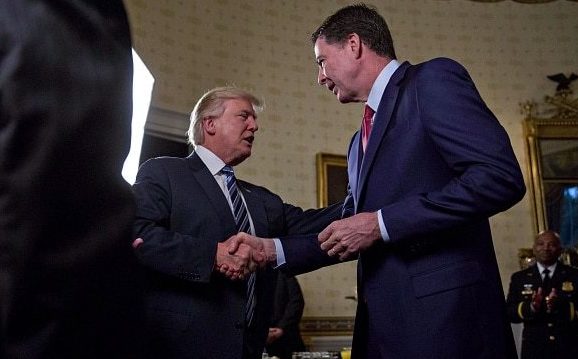 It has been just over 36 hours since now-former FBI Director James Comey was fired and the move has sparked unprecedented chaos in the U.S. and around the world. For the umpteenth time in the past year, there’s been a suspiciously timed announcement, but this time, there’s an immediate tsunami of speculation for his firing – drawing comparisons to President Nixon’s Saturday Night Massacre and head Democratic Senators crying cover up.

The Timeline leading up to Comey’s firing:

A week later, Comey said that they were still not pursuing a criminal investigation against Clinton and shut the case again, only a few days before the election.

A cursory glance at the timeline would imply a very dangerous narrative. Comey announced he was leading an FBI investigation into Trump’s collusion with Russia, he testified about it, and then Trump fired him. That’s about as suspicious of a cover up as you can get.

Minority Leader Chuck Schumer (D-Ny.) minced no words on the suspicion of a cover up, and forcefully recommended a special prosecutor for the Russian investigation shortly after the firing was announced, noting the “deeply troubling pattern” of behavior from the White House.

Schumer cited the Trump administration’s similarly abrupt removal of former acting Attorney General Sally Yates and former U.S. attorney Preet Bharara, both of whom were also in charge of investigating the Trump campaign.

As with the firing of Yates and Bharara, Comey’s firing seems impulsive, and initial reports out of White House suggest that the president asked the Justice Department and Attorney General Jeff Sessions to find a reason to fire the FBI Director after he testified to the Senate Judiciary Committee.

Other reports have also suggested that the president has been enraged by the continued domination of the Russian investigation in the news. Sources say that Trump screams at the television when he sees clips about the probe, according to one advisor. The firing also came, incidentally or not incidentally, after Comey asked for more funds towards the Russian investigation.

Indications that Trump wanted the Russian collusion story to get out of the news cycle are peppered throughout the Trump Administration’s defense of the firing, and even in the President’s letter to Comey.

“While I greatly appreciate you informing me, on three separate occasions, that I am not under investigation, I nevertheless concur with the judgement of the Department of Justice that you are not able to effectively lead the Bureau,” Trump wrote.

Similarly, in the first press briefing since the firing, Deputy White House press secretary Sarah Huckabee Sanders expressed the administration’s desire for everyone to move on from the Russian collusion story.

Sanders also pointed out that Democrats were calling for Comey’s removal after the unpopular revealing of information before the election, and that the administration was surprised to find such an uproar given the public and bipartisan hatred for the FBI Director.

She also said that President Trump had been considering firing Comey since November 9th and that there had been an “erosion of confidence” in the months following the inauguration.

Rosenstein, by contrast, attributed Comey’s firing as the result of his decision not to pursue charges against Hillary Clinton in her email scandal, and that the decision had led to a lack of public confidence in the department.

So, that’s Trump Administration’s explanation for why FBI Director Comey was let go. Comey was wrong for not charging Clinton; Comey was disliked by lawmakers in both party; Comey was just doing a “bad job.”

And it’s true that Comey was disliked, but Trump doesn’t seem to realize that he’s disliked more.

Within just two full days since the firing, there’s been an ever-changing narrative. Unfortunately for the White House, their explanation for firing Comey doesn’t add up.

There’s too many confusions in the timeline. Too many plot holes in their explanation. Too many questionably timed announcements with conflicting interests. Too much.

Trump has made a living firing people that he has deemed disrespectful, and that helps explain the firing in some ways: Comey’s testimony was tantamount to betrayal, and just like he did in the campaign, and Trump is getting revenge on someone disloyal.

Whatever the intentions – as a foolhardy display of authoritarian strength or poorly devised cover up for working with – Comey’s firing continues a theme within the administration: poor optics.

Speaking of optics –  the day after firing Comey, President Trump and Secretary of State Rex Tillerson welcomed Russian Foreign Minister Sergei Lavrov and Russian Ambassador Sergey Kislyak into town for a meeting shut out from the press.