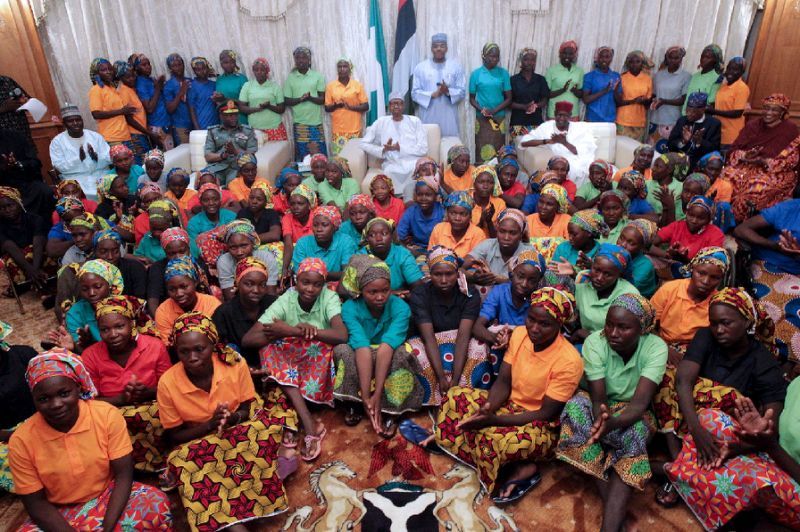 The recent release of 82 more girls from Boko Haram captivity raises several questions regarding timing and the details of the negotiations.

In July, 2015 a human rights activist reported to the Associated Press that Boko Haram was offering to release 200 young women who were kidnapped from a boarding school in the town of Chibok in exchange for the release of militant leaders held by the Nigerian government.

The activist reported to the Associated Press that according to a negotiator in the team, Fred Eno, Boko Haram was reopening an offer it made to former president Goodluck Jonathan to release 219 girls in exchange for 16 of its commanders.

So we ask the tough questions:

1. If at the end of the day, money will be paid and terror masterminds released, why did the Buhari government take so long and continues to take even longer to secure the release of all the abducted girls? Was the government only haggling down on the price to be paid, for example, $70 million to $60 million, and the number of terrorist masterminds to be released from, for example, 16 to 14? Why does it appear there was no sense of urgency in the negotiations if Nigeria will ultimately negotiate with terrorists?

2. Boko Haram negotiator Ahmad Salkida always made it a point to promise that all the girls could be released promptly, should the Buhari government come to the table. For this suggestion rebuked by the army, he and others were declared wanted. Did Nigeria follow the Salkida path? Can we get a revised statement from the Nigerian government on this?

3. How much foreign currency cash did the Federal government of Nigeria pay/fund the terrorists to secure the release of the 82 girls this month as the media agency that broke the report exposed? $100 million? We know that according to the BBC, France once paid Boko Haram $3 million to release a family of 7. In this case, there are 219 girls, which sparks greater media coverage and political impact, So what price was paid so far? $ 1 billon?

4. How many terror masterminds were released in the previous negotiation event and how much ‘mint notes’ foreign currency was paid to secure the release of the 21 girls last year October?

5. Is it only because we know that money exchanged hands and terrorists with blood on their hands were freed that such financial emolument was contained in the negotiations this time and evidently likewise the last time? What other negotiations and what price is Nigeria secretly paying to Boko Haram that the public has not been made aware of? Are they not only being given money and members but perhaps also being given a piece of Nigerian land, in a negotiated settlement? With the government’s secrecy, we are free to explore all assumptions.

6. The peculiar politically tumultuous time this negotiation was concluded and the girls released was perfect timing for a photo-op with president Buhari before he embarked on his apprehensive limelit return trip to the UK for medical therapy. Accordingly, it is fair to ask whether the recent negotiations were only concluded and hurriedly agreed to for political reasons?

8. Just this March, 455 abductees were rescued from Boko Haram controlled territory in Kala Balge LGA. This follows similar reports of hundreds of Nigerians abducted over the years and still under Boko Haram captivity in spite of official false statements that all territory is free. We know of many non-Chibok families concerned about their children still in Boko Haram captivity. Indeed the largest abduction was not in Chibok but at the Damask March 2015, where the government denied  the abduction of over 400 Nigerian women and children. We therefore ask why the Chibok girls in particular were rescued at such a cost and risk to Nigeria, i.e: invariably funding terrorists and releasing their masterminds, while hundreds or thousands of equal-right Nigerians remain in captivity under Boko Haram. Do these women not have any “worth” and why is the government not negotiating on their behalf? Is the Chibok girls’ release at great security and financial cost, mere politics or sincere empathy?

9. Which terrorists in particular were released? Why has the Nigerian government failed to furnish the public with the total number and list of terror masterminds it has released in this and past negotiations with Boko Haram? Will the government release this information in the future?

10. Was the dreaded Khalid al-Barnawi released?

As a Nigerian who believes in the rule of law above all, and respects the constitution as well as the laws of God; I am perturbed by the negotiations with these terrorists. The money being paid to terrorists should rather be used to equip the Nigerian army to conduct the necessary search and recover raids on the terrorists hideouts, to rescue not only the Chibok girls but all Nigerians still in captivity.

As I have earlier pointed out, no civilized nation funds terrorists and releases their masterminds within its territorial boundaries. There will be impeachement and a class action lawsuit if this was ever done. It is also callous to fund and release terror masterminds anywhere else on earth as some foreign nations have been cited to have done. As we previously advised the Jonathan government, any negotiations can at best have wives and children of terrorists released, but not anyone that has raped or has blood of Nigerians on his hands.

Why should our army and civilian-JTF fight and die killing and capturing Boko Haram terrorists only for them to be later freed?

A recent uptick in Boko Haram bombings and massacres in Nigeria and Cameroon could well be attributed to the terror masterminds the Nigerian government likely released in the earlier negotiations with Boko Haram that saw 21 Chibok girls freed. Any new terror activity in Nigeria and neighboring states will likewise be related to the terror masterminds now freed and funded to return to their carnage. The Nigerian anti-terror act is clear on terrorists: they should be killed. While fellow African nations kill their apprehended terrorists, Nigeria is yet to sentence a single Boko Haram terror mastermind to death and rather routinely releases them in negotiations. This is concerning and is a – terror as a means to an end – encouraging habit that must be stopped.

Finally, it was reported that “some of the Chibok girls who managed to escape have been rejected by their community and now live with family friends, tired of hearing taunts like ‘Boko Haram wives.'”

We therefore urge the Nigerian government to invest more funds in paying and rehabilitating the released Chibok girls and all victims of Boko Haram in the north; many of these girls are dying daily of hunger and malnutrition. The government should not prioritize divesting funds to pay off terrorists. A bird in hand is worth more than two in the bush.