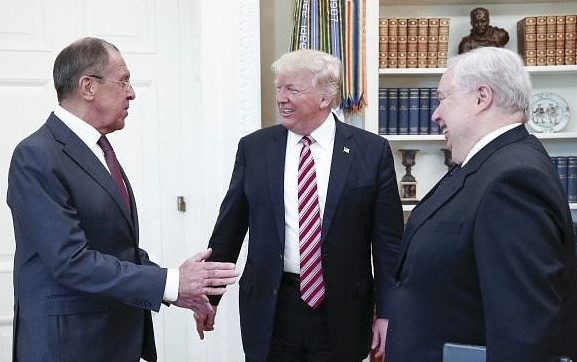 Photo: US President Donald Trump with Russia’s Foreign Minister Sergei Lavrov,and Russia’s Ambassador to the United States Sergei Kislyak during a meeting in the Oval Office at the White House.

Loose lips sink ships; it’s a common phrase that was coined as a slogan during WWII in an attempt to limit people from inadvertently giving useful intel to enemy spies.

Originally intended for citizen-soldiers, those who came up with the phrase I’m sure did not anticipate it applying to the United States’ most powerful leader. Well, it was revealed today that President Trump had disclosed highly classified information at his meeting last week with Russian Foreign Minister Sergey Lavrov and Russian Ambassador Sergei Kislyak, according to U.S. officials.

The information Trump revealed had been provided by a U.S. ally in a longstanding intelligence-sharing agreement, according to the U.S officials. The intel concerned a planned Islamic State operation and it was considered Top Secret and tightly restricted, being held in a secure “compartment” to which only select intelligence officers have access.

Although the President has authority to disclose even highly classified information at will, he did so without consulting the ally; the disclosure, therefore, threatens a United States’ relationship that provides a critical source of intelligence on the Islamic State.

After Trump’s meeting with the two Russian officials, which incidentally occurred shortly after the President fired the former FBI Director James Comey – who was investigating his administration’s potential collusion with Russia during the election – White House officials scrambled to contain the damage by placing calls to the CIA and National Security Agency.

U.S. officials have disclosed to media that they have been concerned for a long time about providing highly classified intelligence to President Trump. One source went as far as to say that the President “has no filter; it’s in one ear and out the mouth.”

The revelation today comes just as Trump is scheduled to meet with Turkish President Tayyip Erdogan, who is an ally in the fight against the Islamic State.