When Is It Appropriate to Talk About Impeaching Trump? 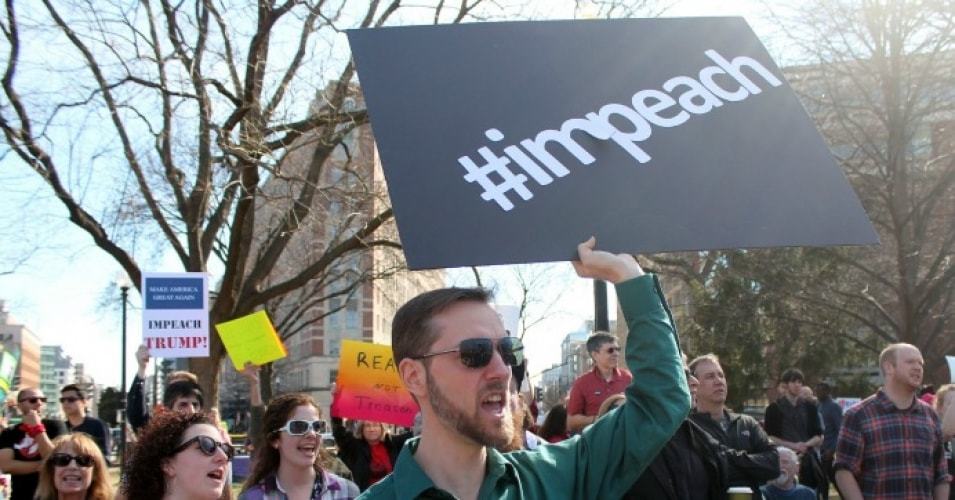 For the week following the firing of FBI Director James Comey, media outlets continuously compared the firing to the events leading up to the Watergate scandal, although nothing suggests that President Trump will receive the same treatment as Nixon.

Here’s The Atlantic: “Five Reasons the Comey Affair Is Worse Than Watergate” which compares the two scandals in great detail.

The writer, James Fallow served as Jimmy Carter’s speechwriter during his first two years of his administration, and, as he outlines in the article, he covered the Watergate scandal in his first job out of graduate school, thereby giving a fresh and knowledgeable perspective.

This alignment on the similarity between the two – and its differences – was echoed across the liberal leaning websites and news outlets like The New York Time’s “In Trump’s Firing of James Comey, Echoes of Watergate” or on CNN with Carl Bernstein saying that this puts America in a “more dangerous” position than Watergate.

Is the firing of Comey, which sent shockwaves across the world – and its subsequent comparison to Watergate – finally the time we should be talking about the end of the Trump Administration?

While political enemies of the president are gaining clout for their desire to kick him out, it’s going to be a long time before the Republican-majority house and senate admit that their party’s leader is deserving of the boot.

Following the comparisons to Watergate came the calls for impeachment. Harvard constitutional law professor Laurence H. Tribe, in an Washington Post op-ed, said, “The time has come for Congress to launch an impeachment investigation of President Trump for obstruction of justice.” Although many have come out calling for Trump’s impeachment, especially Democratic lawmakers, what is notable is that Tribe is regarded as one of the top Harvard constitutional law professors.

While Tribe noted that there are “amble reasons…to worry about this president, and to ponder the extraordinary remedy of impeachment even before the Comey firing”, the event signaled what most believe is the beginning of the end for Trump.

The reasoning is simple. Trump fired Comey to obstruct the FBI’s investigation of his campaign meddling with Russia, and then bragged about in an interview with Lester Holt.

In the interview, he called Comey a “showboat,” saying he was going to fire the FBI Director regardless of suggestions from Attorney General, Jeff Sessions, and the Deputy Attorney General, Rod Rosenstein, and contradicted all of the administration’s line on the matter:

“I said to myself, I said, you know, this Russia thing with Trump and Russia is a made-up story; it’s an excuse by the Democrats for having lost an election that they should have won,” Trump said.

The scandal continues to unfold, with Trump taking to Twitter to make a not-so-veiled threat at Comey which implied Trump has a recording of the meeting. It is still unclear whether such a recording exits.

To add fuel to the fire, it was discovered yesterday that Trump gave classified information to the Russian foreign minister and ambassador.

The Republicans are stalling impeachment

The possible impeachment hinges on the opinion and willingness of Republicans to act, and so far the party has done everything it can to deter and distract the Senate and Congressional probes from investigating Trump’s ties to Russia.

First, the Congressional probe collapsed after the probe’s chairman, Rep. Devin Nunes (R-Ca.) suspiciously met with a source at the White House before having to recuse himself. The investigation has since been set aside, and there’s no schedule for it to begin again.

Second, the Senate Republicans investigating Trump on the Senate Judiciary Hearing are more interested in the leaking of the information to the press than possible collusion between members of the Trump Campaign and Russia during the election.

Third, Senator Mitch McConnell (R-Ky) has stated that no special independent prosecutor is going to be put to handle the Trump-Russia investigation, and most Republicans have fallen in line with the idea that they are the victim of partisan blowback from the Democrat’s lost election.

The simple fact remains that Republicans do not want to investigate their own. Trump signs and endorses laws that work within their conservative agenda – including health care and tax reform. Republicans are willing to turn a blind eye to just about anything the president does, as long as they get their way.

What Could Change That

So when is it appropriate to talk about the end of the Trump administration?

At this point, it’s up to the Republicans and whether they can put their constitutional duties to our country before political expediency. With this logic, a push for impeachment would come only if their personal interests were damaged.

In this case, the end of the Trump administration could come with the midterms, where Republicans will face the most blowback from their constituents. There is also the 2020 election where Republicans may be haunted by abysmal disapproval ratings, giving their Democratic counterparts leverage. However, the wishful thinker in me says that there are some factors that catalyze quicker action.

The most blatant means to speed up impeachment would be the leaking of a recording of the president doing something illegal, and with the way that leaks have been coming out of the White House, that looks like a plausible possibility.

Even then, I don’t know if Republicans would vote him for out of office. It would have to be something more politically damning for the Congressmen and Senators to stay behind the president than not to before jumping ship.

That’s what happened in Watergate when tapes of Nixon planning the robbery was leaked to the press, and a similar magnitude of certainty would be needed to put the Republicans up against a wall. Only then would there be more than an abstract musing to the end of the administration.