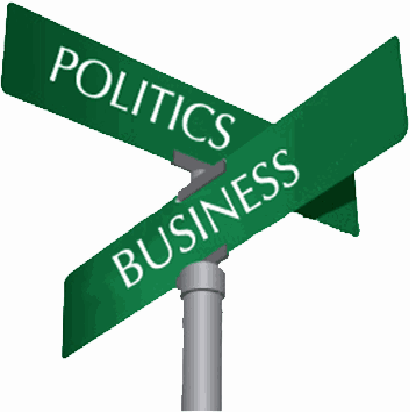 The perennial argument globally in every political economy is coming to a head in Nigeria as 2019 inches closer. The Business class in Nigeria is saying that in the 56 years of the nation, politics has trumped economics for too long to the detriment of the genuine possibility of the provision of the demographic dividends of democracy. And so with the nationwide desire to replace President Buhari in 2019, the Business class wants to take a more definite decision to rescue the nation from its perilous path and step on” the road less traveled”.

Nigeria’s economy is in dire need for a rebirth as it battles its first recession, which began in 1991. Many blame the downturn in oil prices and production shut-ins for the recession.

Businessmen in Nigeria think otherwise. They lay the blame squarely on government and public officials who have suspended all economic logic for political interests.

While important foreign exchange, power and petrol reforms were needed to stem the recession tide and upscale economic growth, many contend that the current politicians are more concerned with protecting the political points and turf ahead of the 2019 elections.

For years, the hope of the private sector has always come under the umbrella of the annual professional think-tank NESG, to chart the way forward and proffer saner policy directions. Making more rational business policies are great for business but having a thriving economy will make Nigeria stronger, not only for businesses but also for every other sector of its economy.

Its time for the successful businessmen in Nigeria to rise to the occasion and throw their hats into the political ring. The regular rogue career politicians are only interested in stealing and looting the Country’s coffers.
In a recent interview, Kyari Bukar, the current Chairman of the Economic Summit Group (NESG) said, ”I strongly believe it is time for professionals and intellectuals to throw their hats in the ring because politics is becoming too important to be left in the hands of anyone.”

This becomes evident with the recent unfolding of a new economic recovery plan, ECONOMIC RECOVERY AND GROWTH PLAN (ERGP),  which is a new strategy of the Buhari Administration to revive the economy. Approximately one month after its release, there is a lack of urgency in implementation, according to prominent members of the Economic Summit Group.

The popular feeling among technocrats and businessmen, according to Opeyemi Agbaje, a senior Lecturer and head of RTC Advisory services ltd in Lagos is that, ” We need the involvement of more professionals, business leaders and technocrats who should go into politics, not as political appointees but on their own cognizance”. For in the end, he added, “those who have the political power determine the outcomes and not the appointed technocrats”.

To underscore his argument, Opeyemi Agbaje added,” Technocrats are likely to have a better understanding of the economic and policy issues underlying national development and are more likely to be more committed to leaving a positive legacy and impact.”

“The hum is getting louder and businessmen are saying it is no longer appropriate for them to sit on the sidelines and criticize politicians who do not seem to get anything right”, said one businessman on condition of anonymity. “It is no longer right to want to be appointed into political positions by those who under normal circumstances, would not be considered qualified to work for you. It is time therefore we go and contest for positions and seek to win elections in order to make the changes we want to see.”

The frustration being expressed has been louder this time around because of the vacuous approach to governance by Buhari, who not only has been nepotic and tribalistic, but also has a more hands-off approach since he seems content with having fellow Muslims in strategic positions.

All these have tended to skew his style of governance towards a more Mullah type of administration and leadership, which cannot be what a Nigerian economy that ranked first in Africa two years ago with a $510 billion GDP, needs now. Worse still is that chasing after “thieves” in his anti corruption and anti Boko Haram wars, puts the economy in back seat of Buhari’s administration. Despite all these, his health, which is a more serious issue, has made him “disinterested” in governance. And hence puppeteers now run his government.

It would however be a challenge to unseat a sickly and a totally incapable Buhari, despite the need to seek alternative leadership in Nigeria, more so from the business class. It is a road never travelled before. However, ever since the executives have been talking louder, the first step being considered is to identify credible and sound business leaders in different sectors of the economy whom the businessmen can support to seek elected positions in Government.

Nigerians, not just the business class, are hopeful and anxious for this paradigm shift if it can ever occur. With not much achieved in two years and a new economic recovery plan coming too little and two years too late and with just a year before the next set of campaigns, there is very little hope with the Buhari regime.

Secondly, in the electricity generation sector, the disappointment is palpable. The present incumbent seems to lack the political will to make the right decisions to take Nigeria out of 56 years of “black outs”.

More developed economies have taken the right steps along the way. For any nation to grow, Economics must trump Politics. Hopefully, Nigeria has come of age. In 2019, we will know if indeed it has.