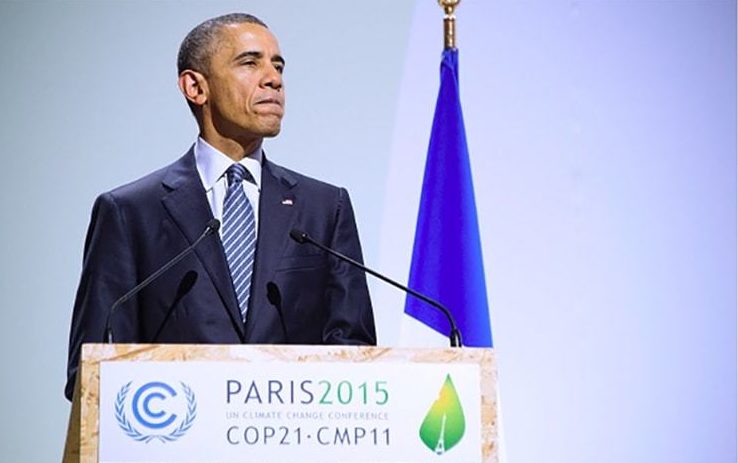 Photo: President Obama praises the Paris Agreement which was adopted by more than 190 countries in December 2015 to collectively combat climate change.

President Donald Trump is weighing whether or not to pull out of the Paris climate change agreement. This comes as the President returns to the United States after his first trip abroad where he engaged in contentious meetings in Europe with NATO, the G7, and various one on one meetings with world leaders.

The White House has yet to give a definitive answer about whether or not Trump has decided to pull out of the agreement but on Wednesday, it was reported that two sources familiar with the decision said the President had decided to withdraw.

In a Tweet, Trump teased his decision on Wednesday morning: “I will be announcing my decision on the Paris Accord over the next few days. MAKE AMERICA GREAT AGAIN!” 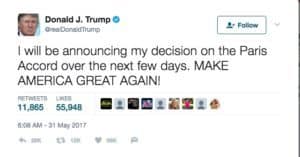 Almost 200 countries signed the Paris Agreement in 2016, including then-President Obama. Trump’s decision to pull out of the agreement would mark a dramatic shift in America’s approach to geopolitics, which since WWII had put the U.S. at the forefront of global agreements and treaties to prevent large conflicts over trade, energy, and nuclear buildup.

The withdrawal also highlights the President’s dubious assertion that climate change doesn’t exist and shouldn’t be a priority for domestic and international policies.

Decline in Relations with Germany

The signal to withdrawal from the climate deal comes in the wake of meetings with German Chancellor Angela Merkel which were decidedly sour. Merkel appeared to be less than confident about Europe’s future relationship with America.

On his trip overseas, Trump had reportedly told Jean-Claude Juncker, President of the European Union, “The Germans are bad, very bad. Look at the millions of cars that they’re selling in the USA. Horrible. We’re gonna stop that.”

Responding to President Trump’s hostility, Merkel gave a speech in Bavaria where she said that Europeans “must take our fate into our own hands,” because the “times in which we could rely fully on others … are somewhat over.”

In retaliation – or in self-justification – for a decline in relations Trump took to Twitter on Tuesday: “We have a MASSIVE trade deficit with Germany, plus they pay FAR LESS than they should on NATO and military. Very bad for U.S. This will change.”

These two larger global-political themes – the shunning of the agreements that establish blocs of support – and the open hostility towards EU allies like Germany fulfills a lot of the promises Trump made on the campaign trail to reject globalism and focus more on nationalism.

As Merkel’s speech highlights, Trump’s stance toward foreign allies and agreements threatens international stability with key European allies. The consequences are dangerous not only for the environment but also for international relations.

Historically the United States has had a focus on the global community, which came as a direct response to the 20th century’s world wars. Being the remaining superpower after the fall of the Soviet Union, the United States picked up a larger tab than the rest; at the same time, the U.S. averts conflicts on the European continent.

A growing trend in this current administration is a snubbing of the priorities for global coordination with allies, and a selfish bluster that alienates liberal democracies like Germany or France. At the same time, the Trump administration praises and draws comparisons to formally antagonistic autocracies.

The administration’s seemingly indifference toward post-WWII political theatre is worrisome to American lawmakers and political scientists on both sides of the aisle, who fear a disastrous shakeup of long-established foreign ally relationships.