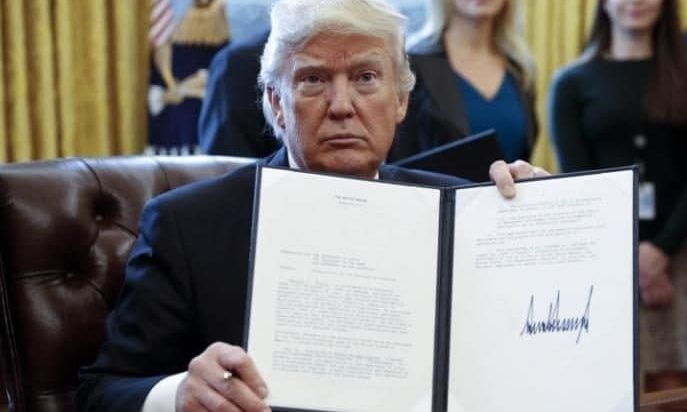 Photo: President Trump stands by his executive order that he signed on January 27, 2017 banning citizens of 7 majority-Muslim countries from entering the country.

The Justice Department asked the Supreme Court to support the ban, which would prevent visitors from six Muslim nations, along with refugees in general, from traveling to the United States.

The first executive order (or travel ban, apparently), which affected seven countries, was signed on January 27th. However, Judge Robert (presiding over Washington v. Trump, which will decide the constitutionality of the ban) issued a temporary restraining order preventing the government from instituting the ban.

In retaliation, Trump issued a second executive order on March 6th, with a more limited scope than the original. The state of Hawaii filed for an injunction the next day, and on March 15th Judge Watson issued a temporary restraining order for the second ban.

Trump’s ‘travel bans’, which are allegedly an attempt to limit terrorist threats to the United States are unlikely to have any positive impact on domestic terrorism. According to experts cited by the New York Times, no domestic terror attack has been executed by any person from the targeted countries since 9/11. More than 230,000 people have been killed in the United States since September 11th, including those who were killed during the September 11th attacks; just over one percent of those people were killed by ‘jihadists’.

While Trump’s executive orders may hold some symbolic reassurance for Americans worried about terrorism, they also negatively affect international perceptions of the United States, and will likely impact allied cooperation with America. Prominently, German Chancellor Angela Merkel stated, “the necessary, decisive battle against terrorism does not justify a general suspicion against people of a certain origin or a certain religion”.

Critically, Trump has yet to appoint a permanent director of the FBI, nor has he appointed an assistant attorney general for the national security division. These personnel vacuums become problematic when dealing with anti-terrorist strategy, particularly when coupled with proposed cuts to state and municipal level anti-terrorism funding.

Indeed, many critics believe that Trump’s actions could worsen threats of terrorism. President Obama’s former assistant for homeland security and counterterrorism Lisa Monaco said on CNN’s News Day that she believed that the travel bans failed to address the root of the terrorism problem, which she believed was more likely inspired by ISIS rather than directly caused by ISIS.

An investigation by the Cato Institute revealed that in the United States between 1975 and 2015, not one citizen from any of the seven originally targeted countries participated in a terrorist attack which killed an American citizen in the United States. Out of 3.25 million refugees admitted to the United States during that time period, just twenty were convicted of attempting or committing terrorism on American soil.

Out of the nineteen total September 11th attackers, fifteen were citizens of Saudi Arabia, two were from the United Arab Emirates, one was from Egypt, and one was from Lebanon. The countries targeted by the original travel ban were Iraq, Iran, Yemen, Libya, Somalia, Sudan, and Syria.

President Trump has had business dealings in Saudi Arabia, as recently as during the presidential campaign. An FEC filing also revealed possible Trump businesses in Egypt and planned ventures into Qatar and the United Arab Emirates. Trump also has ties to Turkey, a country with enough Anti-American sentiment that the State Department issued a warning to possible travelers.

According to a Huffington Post/YouGov poll, overall a little more than half of Americans surveyed agreed with the court in their decision not to reinstate the March ban.

It is likely that Trump’s ‘travel ban’ will be legally stalled for the foreseeable future, especially given his unfiltered tweets that undermine his legal defense, not to mention the lack of fact-based substantiation for the ban that hinders its success in Court.

Two days after the London terrorist attack which killed at least seven people, Trump commented: “Do you notice we are not having a gun debate right now? That’s because they used knives and a truck!” For something as important as anti-terrorism efforts, it’s imperative that we have unilateral collaboration and support among countries and allies. But once again, Trump stands as the odd man out.