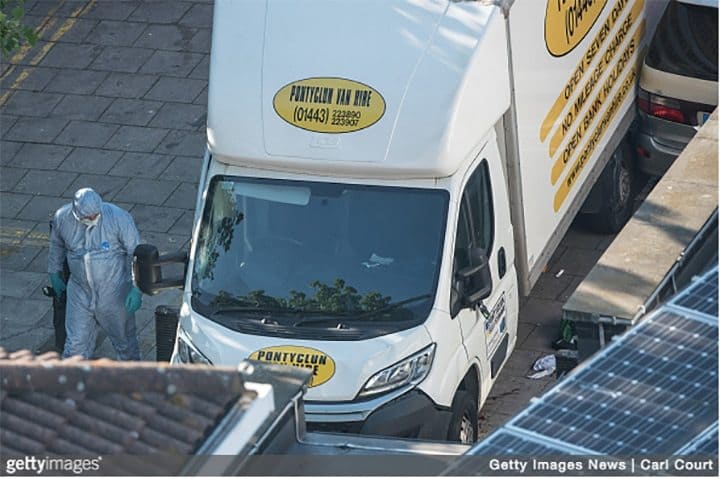 In the early hours of Monday morning in London, a man drove a van into a group of worshippers near the Finsbury Park Mosque. One person was pronounced dead at the scene, and ten people were injured.

It should be noted, though, that police say that the person who died at the scene was receiving first aid before the attack.

A witness told Buzzfeed News that the driver stated he wanted to ‘kill all Muslims’.  A forty-eight year old man was arrested seemingly in connection with the attacks. Just recently, that man was identified as Darren Osborne, a married father of four who was said by those familiar with the man to voice his hatred for Muslims. Neighbors in the suburb of London where he resides have described Osborne as “aggressive” and “strange”.

Witnesses told reporters that they saw three people exit the vehicle involved in the attack, although police said no one else was inside the car. The event is being considered a terrorist attack.

Some of the witnesses say that they helped restrain the assailant until the police arrived. One witness, Salah Alamoudi said, “The guy, I had to keep him at least half an hour. He was a strong guy. A big man […] It was heartbreaking. It wasn’t an accident.”

This attack marks the fourth terror attack in the United Kingdom in the last four months. In response, London Mayor Sadiq Khan stated,  “While this appears to be an attack on a particular community, like the terrible attacks in Manchester, Westminster and London Bridge it is also an assault on all our shared values of tolerance, freedom and respect.”

Prime Minister Theresa May condemned the attack, which occurs during the observance of Ramadan. May referred to the attack as one that “once again targeted the ordinary and the innocent going about their daily lives – this time British Muslims as they left a mosque having broken their fast and prayed together at this sacred time of year.”