TO MAKE OR MAR NIGERIA: THE EVICTION NOTICE BY AREWA YOUTHS

It was a simple order from Nnamdi Kanu, the acclaimed “Spiritual Leader” of IPOB (Independent People of Biafra) to all “Biafrans” to stay home on May 30, 2017, an instruction that shut down the entire 5 Igbo (Ibo) speaking States of Nigeria. That simple order to all Igbos (Ibos) to use the day to commensurate the dead in the pogrom days of 1966 and in the Civil War years (1967–1970), opened the lid of the seemingly impossible and was – never – to -be – touched – Nigeria’s false unity of 1960 to 2017. The cabals and past military regimes, largely of the Northern Stock, saw that action by Kanu as a threat and an untouchable issue. The Nnamdi Kanu’s order opened Pandora’s box; a box the cabals thought was signed, sealed, and delivered. The reaction that follows was swift and pandemonium.

The Nigerian Senate did a quick turnaround. The South East Development Commission Bill, which was thrown out, was quickly recalled. The bill so far is in its second reading. The 2014 National Conference report which President Buhari said is consigned to dustbin and pigeon hole of history – a document put together under Jonathan’s Administration to resolving ethnic tensions – was quickly called to be brought to the table by 106 Senators in a motion and a move calling for National unity and peaceful co-existence.

The Acting President, Professor Yemi Osinbajo went into an overdrive move. He called on Northern Elders to restrain their youths with strong words “The Federal Government is committed to ensuring that our country remains united and anyone who violates the law as we are seeing all over the place, will be met with the full force of the law”. He moved along on the diplomatic lines initiating consultations with leaders of thought in the North and South East and with all Traditional Rulers – all within the last week and within a space of two days.

But what seemed to have exploded in the face of the political elite was the threat by the Arewa Youths. The case of the Arewa seems more like a cover up for the Northern cabals who are afraid of losing power and influence if President Buhari dies or resign because of his ill-health. The Arewa Youths issued a 90-day ultimatum to all Igbos to quit the North and urged those of Northern extractions to return to their States of origin by October 1st 2017. 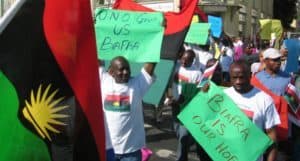 Shooting from the hips and firing from all cylinders, Acting President, Yemi Osinbajo said “These expressions and agitations from both sides have been attended with some controversial and hateful vituperations, including patently illegal violence – inducing remarks. I firmly believe that we ought to address these agitations and proclamations urgently and decisively”.

Indeed it is urgent to act quickly, otherwise, more ethnic parts of Nigeria may increase their hate speeches, and threats and October 1st May be the apocalyptic date for the end of Nigeria. As if on cue, those of the Niger Delta region are asking Northerners to quit their oil block licenses and depart before October 1st 2017. Those from the Middle Belt in a reaction to the Igbos under threat to quit the core Northern States, are telling anyone who cares to listen that they are the true indigenes of the Middle Belt and that all Igbos who may wish, could come and settle in the Middle Belt of Nigeria.

During a visit by Caracal Reports staff to Enugu, the heartland of the Igbos and the former Capital of the Eastern Region, the reaction by the people to the Northern eviction was swift. Our conversations started with a Rickshaw cab driver, 42 year old, Okezie Ayogu, he said “Heads of families who are in the North are sending their wives and children back to the East, even if not in huge numbers, while the men are sitting out the quit notice of October 1st 2017. You cannot trust the Northerners. They are very secretive and cannot disclose what they intend to do, pending that October 1st date” A transporter at Faith Motors Park at Ogbete Market, Enugu Chikezie Okonkwo, says it off handedly – “Look out there. Those are Northern Hausa traders, sitting out there selling their wares, and conducting their petty trade. But the Northerner are very secretive. You cannot know what is in their minds or what they intend to do? But for now they are not relocating to the North”.
The rickshaw cabdriver later emphasized that some Ibos in the North are not afraid to fight, “Though the Igbos in the North are staying back for now, they are watching out for any trouble signs. They are in a state of readiness for any eventualities”.

What however seems to have stemmed the anticipated massive movements to the North and vice versa to the South seems to have been the massive trouble shooting by the Presidency, the Senators and Governors of the Igbo states. According to Nnia Nwodo, the President General of Ohaneze, and the umbrella Igbo Socio -cultural group – “Nigerians should learn from the civil war. The disintegration of the country will not be in anyone’s interest”.

The masses, especially the Igbos themselves, seem to be heeding the words of Acting President Osinbajo who said, also last week – “It is clear that wars sometimes start, not with bullets, but with words. Hateful incendiary speeches open the floodgates of blood… When we throw words like stones in a marketplace, we do not know who or what it will hit”.

Indeed those words resonated with all Nigerians as it made those who are 50 and above, to recall what created the first Biafra and for those below, what caused the 1994 Rwandan Genocide. Nigerians seem anxious to want to walk back from the precipice.

What however is significant this time is that the intention of a cabal who did not want to see a Presidency of Yemi Osinbajo, are secretly floating a coup rumor. The Igbo threat by the Arewa Youth is to cause a general commotion that would be a rationale for a purely Northern Muslim dominated Armed Forces to stage a coup. But for now, that seems to have been curtailed but time will tell. 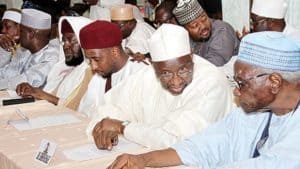 What has to be permanently doused in any case is the youthful uprising, manifesting in ethnic agitations for – either a restructuring, or secession.
While that is an urgent move, a bigger challenge has arrived in the scene where the Southern Nigeria made up of South East, South-South and Southwest are clamoring with one voice for a Revisit to the 2014 National Conference Report. Its implementation and Re-structuring of Nigeria must be done prior to October 1st 2017 as no one in the South is taking lightly the “Kaduna Declaration” by the Arewa Youths. In a communiqué released on Sunday 18th June 2017, it reads in part;
“We consider the need to avert the impending danger arising from the ultimatum given by the Arewa Youths. The meeting therefore insists that any further discussion on this crisis should be between the entire South and the North of Nigeria, because the issues involved affect all of us”.
Continuing on a path to resolve the impasse, the communiqué unambiguously states that;
“Now we also resolved on the need for the restructuring of Nigeria and to uphold the principles of true federalism as agreed by the founding fathers of Nigeria and practiced effectively in the years before the first military coup in Nigeria.”

Clearly, whether it is the youths clamoring or the new voices of the Elders in the South, it is all about the failure of leadership over the years, which has been corrupt, inept, and unresponsive to people’s feelings. It is now time to deal with the realities of missed opportunities and broken promises over the last fifty-seven years. It is harvest time as every action has its consequences. The youths are more agitated, no doubt, as they want to arrest living in a broken country. It is now time to go beyond “allocative federalism” and living off the renter system of Nigeria and begin to engage in productive work of Nation building, otherwise, like James Baldwin predicts in his book title, it will be “FIRE THE NEXT TIME”.

Meanwhile, a new twist has been added to the mix. The Northern Youths have written to the Acting President, Yemi Osinbanjo to initiate a referendum process in order that Biafra may exit from the rest of Nigeria and in peace. The date of that referendum is still prefixed at October 1st 2017. While the youths in that letter written on Monday 19th June, 2017 talks about separation without violence, the presumption of the writers of that memo seem to neglect the fact that “Referendum” was never written into the current Nigerian Constitution. To trigger a referendum would require a constitutional amendment. Whether this can happen ever or without bickering and bad blood, nobody can be sure.

In a live telecast on Tuesday, 20th June 2017 on Channels Television Governor Nyesom Wike of Rivers state says “He does not believe nor interested in the quit notice to Igbos (Ibos), but wonders why it is the Igbos versus Hausa spats is what is bringing Nigerians to a Constitutional debate or amendments. Asking further, he says “When the South-South agitated, no one listened. So why now? I believe in true Federalism, not this unitary Federalism. Unless there are local buy ins, there would always be separatist agitations. I do believe anyway in Nigeria, not in secessions and break ups”

The future is certainly pregnant. Indeed, for the now, we live in interesting times.