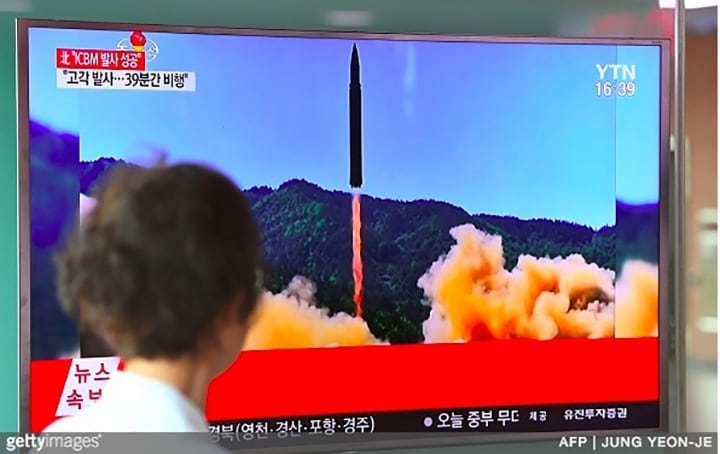 Photo: A woman in Seoul walks past a TV screen showing a picture of North Korea’s launch of an intercontinental ballistic missile (ICBM).

As people all over America began preparations for July Fourth celebrations, across the international date line came a harsh reminder that the US, despite its claimed greatness, has just as many enemies as friends. From a testing facility in Panghyon, North Korea, a new kind of ballistic missile was launched, with some frightening capabilities. North Korean state media claimed the missile reached a height of 2,800 kilometers (1,741 miles), making it the most successful ballistic missile test carried out by the Democratic People’s Republic of Korea (DPRK).

In order for a missile to be classified as an intercontinental ballistic missile (ICBM) it must be able to travel at least 5,500 km, or roughly 3,400 miles. The North Korean missile has a theoretical range of roughly that, putting it on the line between an intermediate-range ballistic missile and an ICBM. The distance is theoretical because of the trajectory, as it was shot straight into the air; however, if it had a more standard trajectory it is believed that it would have the ability to travel 5,500 kilometers, which would, among other things, put Alaska within range of a North Korean ICBM.

This was the first successful test of it’s kind that the DPRK has carried out, and North Korean state media reported that they have a missile which is capable of striking the US mainland, although according to a CNN report: “experts caution against taking North Korea’s claims at face value,” as the distance is still, at the time of writing, theoretical. CNN also states that a defense official said that the re-entry of the missile into earth’s atmosphere was still being assessed, as it’s entirely possible that the re-entry wasn’t fully controlled. Reentry is important as if it isn’t fully controlled the missile could break apart on its way back to earth.

According to CNN, in response to the test US and South Korean military conducted a joint exercise which South Korea said was “intended as a strong warning against North Korean provocation.” Secretary of State Rex Tillerson responded to the test by claiming that global action would be needed to stop North Korea. Although several nations agree, the differences come on how best to deal with North Korea, with countries like China and Russia arguing for a diplomatic approach. The Chinese Foreign Minister Wang Yi said the US and North Korea were set for a “head-on collision.”