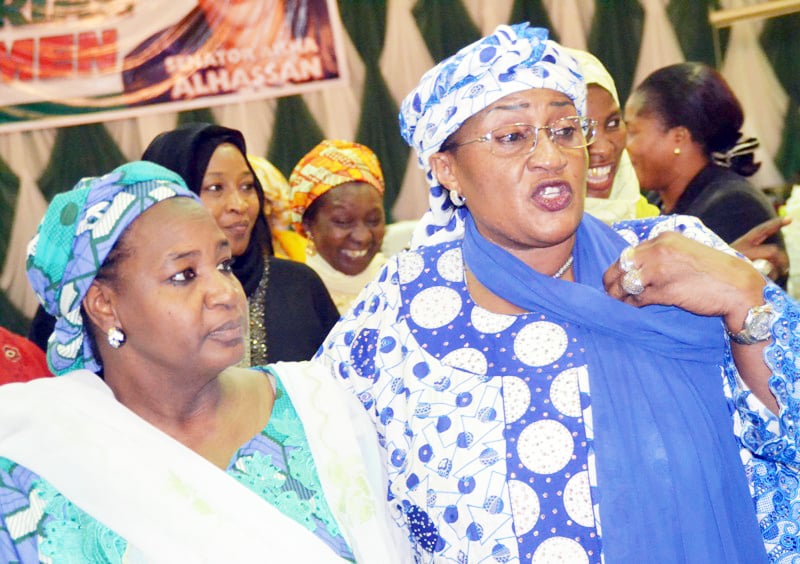 Nigerian politician and minister of Women Affairs and Social Development, Aisha Jummai Alhassan, has called upon the leaders of the political parties in the nation to allow women to occupy more space and permit them to participate in the country’s governance and partisan politics.

“From the lowest, all the way to the highest, women have often been underrepresented in leadership positions and decision making and are only sought after as electorate during electioneering campaigns. This sad reality of women being underrepresented in all facet of the political process is often due to social-cultural barriers, leading to poor public, social and political party support”, Alhassan exclaimed as she led several women societies and civil rights groups on a courtesy visit on Sunday to Ahmed Makarfi, Chairman of the People’s Democratic National Caretaker Committee in Abuja

She continued to highlight other factors that has led to the nation’s poor performance in terms of equal opportunity for women in politics. “Entrenched traditional views, lack of financial means, lack of capacity building opportunities especially access to technology, gender discrimination, divisions along ethnic lines, violence and intimidation have all contributed in poor performance of women in political activities especially elections.

As a result, we have been overtaken by countries like Rwanda with 66 percent women representation in parliament, South Africa with 40 per cent, Seychelles with over 50 per cent, Ghana with 35 percent and a large chunk of other African countries with over 25 percent. Unfortunately, Your Excellencies, Nigerian stands at less than 6 percent,” she exclaimed.

In response to Alhassan and on behalf of the party leadership, Senator Makarfi expressed his gratitude to the Ministry and her delegation for the visit and vowed to the PDP’s commitment to partner with her in the fight for more women participation. In addition, he urged Alhassan to bring her entreaty to the parliament of Nigeria for possible amendment of existing laws or enactment of new laws in order to create more slots for women in government.

“You are here on a courtesy call on a very fundamental issue – that of bringing some parity in gender participation by our mothers and sisters in governance…You are doing this at a very good time. Some matters are not just matters of policy but matters of constitution”, he advised, while also humorously referring to the minister as “Mama Nigeria.”