This week was tumultuous to say the minimum for the Trump administration. President Trump gained a new communications director in New York financier, Anthony Scaramucci. Despite having a new member of the team, charged with crafting the President’s message, the administration lost its mouthpiece in the form of Press Secretary Sean Spicer. The highly divisive and often combative press secretary had large reservations about the hiring of Mr Scaramucci and decided to tender his resignation.

As pressure surrounding the investigation into Russia’s tampering with the 2016 United States election mounts, President Trump took to twitter to defend himself. He insisted that he holds “complete power to pardon” including himself and members of his team.

Congress has defied President Trump’s attempts to ease sanctions on Russia after tampering with the 2016 US election. The president is seeking to change a bill that would toughen sanctions against Russia. According to a report by the Independent, the bill received overwhelming bipartisan support, making it out of the senate by a 98-2 margin, and many representatives would look to establish a newl review process to block President Trump from easing sanctions. 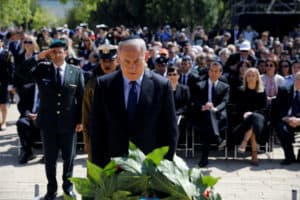 Israeli officials have confirmed that three Israelis were stabbed to death in an attack on the west bank. Tensions have been rising of late, under the new security measures put in place at a holy shrine in Jerusalem, and the attack came at the end of a day of violent clashes between Israelis and Palestinians. Palestinian President Abbas has also “frozen” contact with Israel over the contested shrine.

Iran has seized a Saudi Arabian fishing vessel and arrested the entire crew. Tensions between the nations are at their worst in years, in a region choked by violence. Each nation is accusing the other of subverting the security of the region, and they support different sides in conflicts in Syria, Iraq and Yemen. Riyadh, along with several other nations in the gulf region have severed ties to Qatar, their support for Iran is one of the main reasons for the move.

Russian President Vladimir Putin has indicated he may seek to retain the Presidency come the 2018 election. He is widely expected to run for another six year term. Mr Putin has been President since 2000, but for a brief stint as Prime Minister from 2008 to 2012. Mr. Putin has also indicated that he will not amend the constitution to allow him to serve indefinitely.