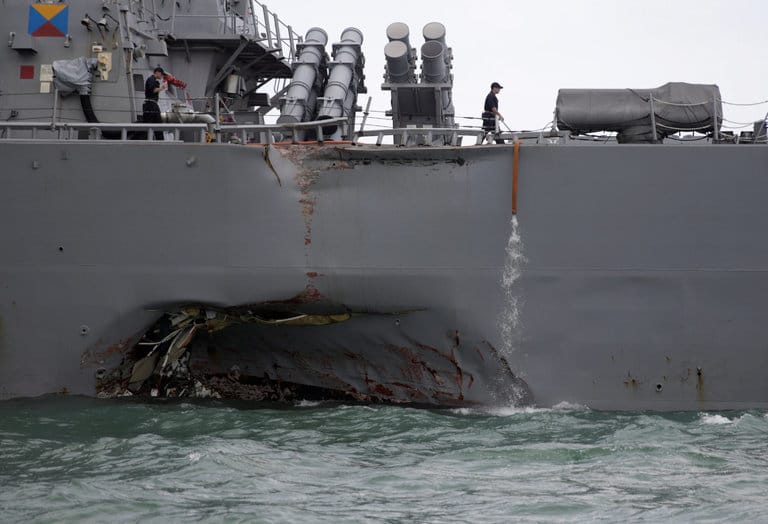 The US Navy is looking for answers after the USS John S. McCain collided with a merchant ship. Search and rescue operations are underway to locate 10 missing sailors. The guided missile destroyer collided with an oil tanker east of Singapore.This is the fourth incident of its kind so far this year. The rise in such incidents this year have left the Navy searching for answers, and Adm. John Richardson, chief of naval operations, to conduct a “comprehensive review” of recent US Navy collisions.

According to CNN, the Navy’s goal will be “to determine any of the causal factors, to determine what’s going on — both immediate contributors to this incident but also any related factors.”

The USS John S. McCain was able to steam ahead to Singapore under its own power after the collision. Luckily, no oil or fuel was seen on the water as the McCain left the scene. The search efforts to find the missing sailors as Malaysian officials have indicated that their ships and aircraft had joined the search. In addition to the 10 missing sailors, five were injured in the collision. Four of those injured were flown to a hospital in Singapore and treated for wounds which are not considered life threatening.

This accident is the fourth of what has been a rocky year for the US Navy. The first collision occurred in January, each one that has followed has occurred in the Asian pacific. The most recent accident for the navy occurred in June and claimed the lives of seven sailors, when the USS Fitzgerald collided with a container ship off the coast of Japan.

Military experts have indicated that this could be a turning point for some Navy brass, as Naval training is called into question. A Navy report released last week, regarding the Fitzgerald collision, stated that training and qualification procedures would be reviewed. As the collisions mount, the calls for review of training procedure was echoed by Admiral John Richardson in a facebook statement. In his statement Admiral Richardson said there would be an investigation into the collision, which would include a review of “the process by which we train and certify our forces that are forward-deployed in Japan to make sure that we’re doing everything we can to make them ready for operations and warfighting.”

In a press conference, Malaysian authorities said both ships were heading for Singapore, at the time of the collision. The collision occurred just east of the Malacca Strait, which is the world’s second busiest waterway. They further described the area as very busy, seeing roughly 80,000 ships every year. Experts claimed that the tanker may well have been two or three times larger than the USS McCain. Thus, it could have taken miles for the ship to change its course.

The differences in size and speed have left some wondering how the far smaller and nimbler, state of the art military vessel would not have been able to get out of the much slower, 30,000 ton oil tanker.