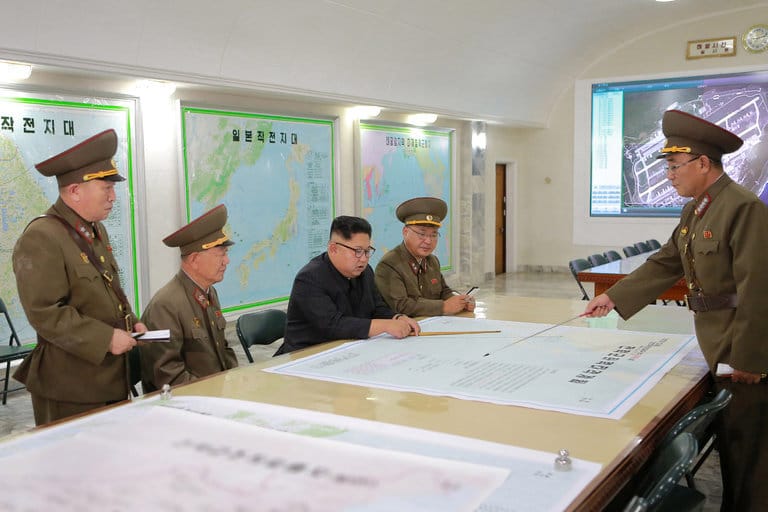 New photos out of North Korea appear to showcase new developments in the country’s missile program, according to experts, which includes a previously hidden type of projectile.

KCNA, the North Korean State media, announced on Wednesday that leader Kim Jong Un had taken a trip to the nation’s Chemical Material Institute of the Academy of Defense Sciences. In a statement made by KCNA, Kim had “instructed the institute to produce more solid-fuel rocket engines and rocket warhead tips by further expanding the engine production process.”

However, it was the photos released by State Media of Kim’s visit which caught the attention of missile experts and analysts.

David Schmerler, research associate at the Monterey Institute of International Studies’ James Martin Center for Nonproliferation Studies, told CNN that “this is the North Koreans showing us, or at least portraying, that their solid-fuel missile program is improving at a steady rate.”

In one photo of Kim’s visit, a poster in the background reveals the mentioning of a missile called “Pukguksong-3.” It is quite possibly the successor to the previous 2 versions of the missile, both solid-fuel and medium-range projectiles.

According to Michael Duitsman, another research associate at the James Martin Center, “North Korea’s desire to build solid-fuel missiles is driven by their need for projectiles they can launch quickly and subtly. Solid fuel missiles are much faster to deploy… a solid fuel missile is always fueled so all they have to do is drive it to the place they want to launch it. It’s much easier to put into action, much harder to catch before it launches because they’re a lot less in terms of launch preparations that could be done.” All ballistic missiles owned by the United States and Russia are solid-fuel models, Duitsman emphasizes.

In another photo, Kim is standing beside what appears to be a large, copper-colored container, which according to experts, could be a plastic rocket casing that is reinforced by wound-filament.

“It’s not a missile test,” Duitsman exclaimed, “but it’s still very disconcerting for people who look at the North Korean ballistic missile program. Seeing the casing … is sooner than I expected.”

According to both Duitsman and Schmerler, the wound-filament casing seen in one of the photos would be lighter than its two preceding metal versions. This will allow North Korea’s missiles to fly even further.

This is evidenced by the fact that in the 1960s, the United States Navy switched to the lighter casing during the Vietnam war, and their missiles flew an additional 500 miles, approximately 50 percent increase than before.

It is highly unlikely that the revelation of the new missiles and the wound-filament casing were a mistake made by North Korea, according to Schmerler. “I don’t think there’s any accident about this. The shot clearly shows Pukguksong-3. This was the North Koreans showing us what we could possibly see soon.”

In recent weeks, high-profile US leaders have praised Pyongyang and Kim Jong Un for showing a respectable amount of “restraint” for pulling back and reversing its decision to launch missiles aimed into the sea of Guam.

One week ago, President Donald Trump tweeted that Kim made a wise decision not to launch a missile at the US territory, adding that the alternative would have been “both catastrophic and unacceptable.”

On Wednesday, Trump spoke at a rally in Arizona where he proclaimed that Kim is “starting to respect us.”

Rex Tillerson, US Secretary of State, stated that the US was open to dialogue with the authoritarian state.

“I think it is worth noting, we have had no missile launches or provocative acts on the part of, or provocative actions, on the part of North Korea since the UN Security Council resolution sanctioning Pyongyang on August 5. I am pleased to see that the regime in Pyongyang has demonstrated restraint. We hope this is the signal we have been looking for, that they are ready to restrain provocative acts. And perhaps we are seeing a pathway in the near future to having some dialogue,” Tillerson said on Tuesday.