Explosions at a Texas Chemical Plant 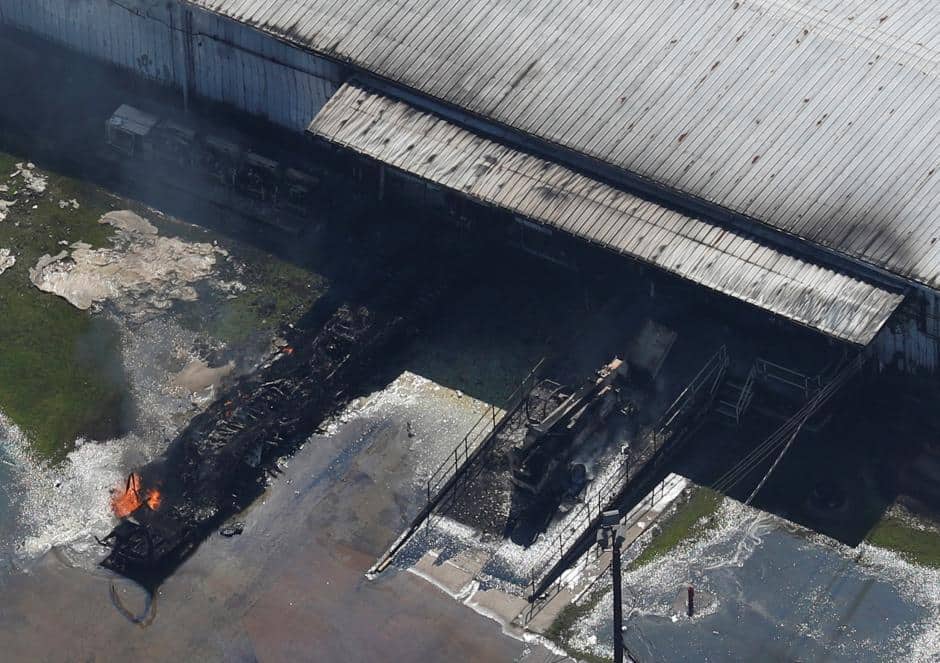 Explosions rocked the Arkema SA chemical plant in Crosby, Texas. The explosions were a result of the flooding brought on by Hurricane Harvey. The company evacuated any workers that remained in the plant. They also ordered the evacuation of any residents within a 1.5-mile (2.4-km) radius. One police officer has been brought to the hospital after inhaling some of the fumes after the explosion. Nine others brought themselves to the hospital as a precaution. The plant produces organic peroxides which can be found in plastic resin, polystyrene and paint.

In a statement, Arkema, the French company, said: “We want local residents to be aware that the product is stored in multiple locations on the site, and a threat of additional explosion remains. Please do not return to the area within the evacuation zone until local emergency response authorities announce it is safe to do so.” People took to social media and twitter in droves to warn of the possible explosion and urge people to evacuate.

The grounds of the plant contain multiple hazardous chemicals and materials, including sulfur dioxide, which is toxic, and methylpropene, a flammable gas. The plant, along with much of the surrounding areas, was battered by Hurricane Harvey. The plant had an astounding six feet of flood water within its perimeter. The company had warned of the possibility of an explosion as recently as Wednesday. Many on twitter placed blame on Arkema for not disclosing what chemicals they had, or their quantities.

Rich Rowe, Chief Executive of Arkema’s North American Branch stated: “Right now, we have an unprecedented 6ft of water at the plant. We have lost primary power and two sources of emergency backup power. As a result, we have lost critical  refrigeration of the materials on site that could now explode and cause a subsequent intense fire. The high water and lack of power leave us with no way to prevent it.”

In 2014, Arkema submitted a worst-case scenario to the government outlining a scenario in which roughly 1 million people could be affected over a radius of 23 miles. That scenario would have seen a total control failure at the plant, coupled with strong winds blowing towards Houston. The company stated that it had been using “multiple layers of preventative and mitigation measures” at the plant. Among these measures were steps that could have reduced the amount of substances released. These steps made the “worst-case scenario” highly unlikely.

The Houston branch of the National Weather Service said that a light breeze was blowing away from Houston roughly two hours after the explosion. The damaged Arkema plant lies within a stretch of refineries, chemical plants and pipelines, near Houston. This stretch has one of the largest concentrations of cush plants in the United States.

This is another scene in a long list of horror for the Houston area, as Hurricane Harvey rocked Southeast Texas. Three dozen people have already been killed since Harvey made its initial landfall. Meanwhile tens of thousands of people have been displaced, temporarily and permanently. The storm has since been downgraded to a tropical storm, however it has also made a second landfall in Louisiana. It is expected to move farther north after its second landfall. Houston’s fire department is expected to begin a block-by-block search of thousands of flooded homes, making sure nobody gets left behind.