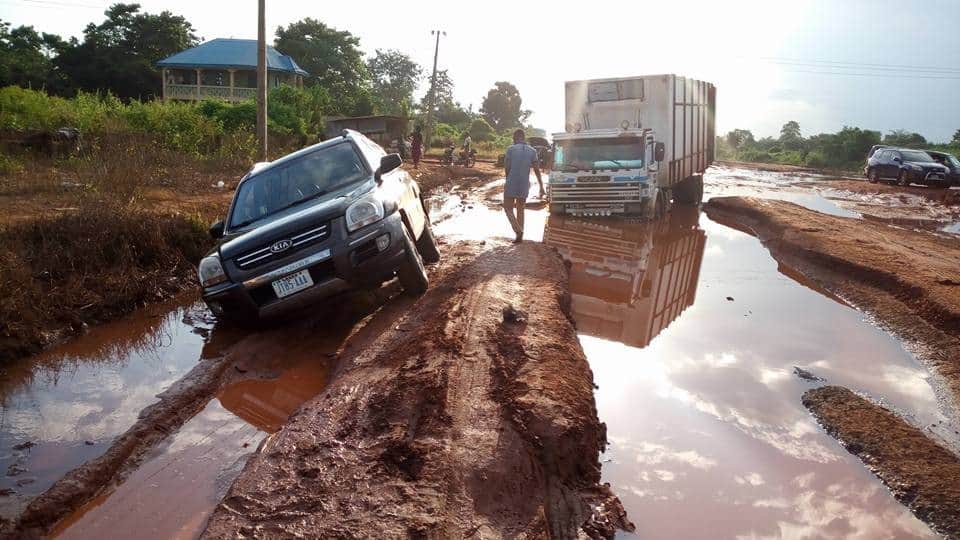 The poor state of major roads in Nigeria has claimed about 5,740 lives between January and September 2017, according to the Federal Road Safety Commission.

This implies that an average of 20 lives was lost during the period under review and more may be expected if the state of the roads deteriorate further, especially as Christmas and New Year celebrations draw near when most people are expected to travel via road for the celebrations.

A few months ago, the Nigerian Bureau of Statistics reported that a total of 1,279 Nigerians got killed in the road traffic crashes recorded in the second quarter of 2017 (April to June).
About 94 percent of the victims were adults, while the remaining 6 percent were children. Also, 80 percent of the population were men and others were female.
NBC’s data also revealed that 58.59 percent of vehicles involved in the crashes are commercial vehicles, while 40.22 percent are privately owned vehicles, 1.14 percent are government owned, and the remaining 0.02 percent is owned by foreign embassies and international organizations in the country.

However, a member of a non-governmental organization, Safety Beyond Borders, Mr. Patrick Adenusi, argued that not less than 100 people die daily across Nigeria roads due to the state of the roads.
He picked holes in the claims of the federal government and claimed that more lives are lost to road crashes as most of the Nigerian roads are death traps.

“We call on corporate organizations in Nigeria to support the on-going effort by the Federal Road Safety Corps to curtail road accidents across the country. Road safety campaign is a collective responsibility and it is obvious the government is overwhelmed.

Investigations by Caracal Reports revealed that the bad roads are across the country. Some of them are Benin bypass (located in the Southern part of the country), Lokoja- Ajaokuta road (North Central), Onitsha-Enugu road (Eastern part), Mokwa-Jebba road, Agbara road and Lagos-Sagamu-Ore-Benin road, (Ogun State, Western part of the country).
Others are Kabba-Kafanchan, Mokwa-Jebba, Aba-Obigbo and Idoma-Benue highway; all between the Northern and Southern part of Nigeria.

For instance, it is a woeful story of failure for motorists that ply Lagos–Badagry Expressway, which links the country to others in West Africa. With the on-going construction, traveling using the road requires some form of patience and bravery as it uses to be a task that could take up to four to five hours or more instead of the usual 30 minutes.

Apart from the on-going efforts of the Lagos state, the commercial hub of Nigeria, with the assistance of the World Bank, to reconstruct the road, which is expected to cost about N220 billion, the federal government has not maintained the road since 1970’s.

As a result of that, traffic is never light on any day of the week. The road is always clogged by all types of vehicles bearing either goods or passengers or both with some parts of it taken up by broken down vehicles and commuter buses waiting for passengers.

“It is worse when I am coming from work in the evening because at that time, people coming from work block both their lane and the outbound lane. We then struggle to pass each other, crashing our cars in the process,” said Emmanuel Oghene, a resident of Navy Town, Alakija, Lagos State.

Other road users that travel from anywhere in the Southwest Nigeria to Abuja, the nation’s capital, through the Lokoja-Okene road in Kogi State, North Central, understand that the Lokoja-Ajaokuta road had claimed several lives in the last five years. Not only is this road bad, it is also a haven of armed robbers.

Thousands of passengers traveling the Lokoja-Okene road to Abuja or to Ondo State have been robbed of their valuables by armed bandits and dispossessed of their goods. The same can be said of the Ilorin-Kabba-Lokoja road and the Lokoja-Obajana-Kabba road among others along that same axis.

Other road users that ply Lagos-Sagamu-Ore-Benin road, Lokoja- Ajaokuta road (North Central), Onitsha-Enugu road (Eastern part), Mokwa-Jebba road, Agbara road lamented to our correspondent as they lose millions of naira on a daily basis while trying to move their goods to other parts of the country.

An audit firm, KPMG Professional Services, also stated in its recent report titled ‘Doing Deals in Nigeria,” that only 20 percent of roads across the country are paved despite the fact that road transportation is the means of movement for 80 percent of goods in Nigeria.

“The parlous state of road infrastructure in the country, especially those connected to the ports, has become a major concern to foreign investors, as the inadequacies pose a significant challenge for businesses, by adding a substantial amount to time and ultimately increasing overall cost. Much of Nigeria’s potential for economic growth remains untapped due to the chronic lack of good roads and electricity, which increases the cost of domestic production,” it stated.

But why are Nigerian roads not safe?

One of the Zonal Coordinators of the Federal Roads Maintenance Agency, who prefer anonymity due to the sensitivity of the issues disclosed that the roads have been over-stretched with the volume of traffic and activities.
According to him, most of the roads were constructed in the 1970’s and 1980’s and were not constructed for goods like bulk cement, sugar and containers to be transported on them.

“To avoid such excess loading on the roads, weighbridges were constructed in the 1980’s in about 11 locations across the country to determine and control overloading but they collapsed due to lack of proper maintenance,” he disclosed.

The Zonal Commander, Plateau State, FRSC, Mr. Oladaren Fadogba, attributed the causes of the death to bad roads, loss of control of drivers and dangerous driving among others.

He said, “Bad road is the major cause of road accidents in Nigeria. Between Abuja-Jos road and Mararaban Jamaar in Jos South, there over 2, 000 potholes on that road alone. How can a trailer maneuver such potholes? And that is how most roads are in Nigeria.

“The federal government is doing all it can to ensure safety on all Nigerian roads and that is the reason it has injected several billions of naira over the years to provide infrastructure to ease ways of doing business across the country.”