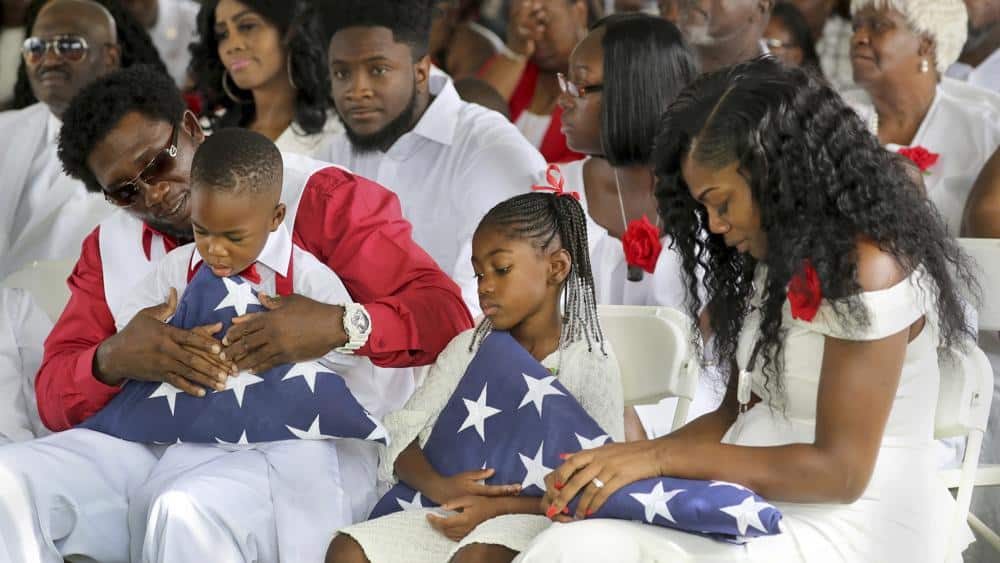 Myeshia Johnson, the widow of the fallen soldier Army Sagt. La David Johnson, told Good Morning America this morning that her call with President Trump in which he offered his condolences to the family “made me cry even worse”.

The controversy began when Florida Democratic Congresswoman Frederica Wilson revealed she had been listening in on the call, as she was close to the family, and claimed that President Trump had made some insensitive remarks about Sgt. Johnson’s death, saying the President said, “I guess he knew what he signed up for, but it still hurts.”

Mr. Trump denied the allegation, calling Representative Wilson “wacky” in a tweet, and insisting that he was “SECRETLY listening on a very personal call and gave a total lie on content”.

Mr. Johnson’s widow confirmed Representative Wilson’s account in her interview with GMA, saying Mr. Trump called to offer his condolences when they were on the way to the airport to meet her husband’s casket. Ms. Johnson had asked for the President to be put on speakerphone so that her uncle and those traveling with them in the car to the airport, which included Representative Wilson, could all hear. She said, “I was very angry at the tone of his voice and how he said it, he couldn’t remember my husband’s name” and that it “made me angry, it made me cry even worse”.

The situation had escalated late last week when President Trump’s chief of staff General John Kelly then publicly criticized Ms. Wilson at a White House Press briefing, issuing statements about a speech she gave that have now proven to be misrepresentative and called her an “empty barrel that makes the most noise”.

Representative Wilson has called for General Kelly to apologize for his “character assassination” of her, while White House spokesperson Sarah Huckabee Sanders defended the words of the general, saying, “If you want to get into a debate with a four-star Marine general, I think that’s something highly inappropriate.”

Sgt. Johnson was killed in an ambush in Niger along with three other American soldiers, and an investigation is still ongoing as to what happened there. The ambush that killed Sgt. Johnson is thought to have been organized by ISIS militia in the small town of Tongo Tongo, close to the Malian border. It took the President 12 days to publicly acknowledge the attack had taken place.

Ms. Johnson confirmed this morning that she knows nothing of the circumstances surrounding her husband’s death, saying, “they won’t tell me anything”. Senior members of the Republican party, including John McCain, have called for an investigation into the circumstances surrounding the deaths of the four U.S. military personnel, even going so far as to threaten a subpoena to ensure Congress gets all the relevant information.