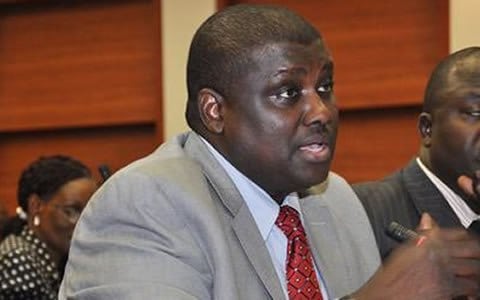 Recent blowback has greeted the Nigeria President Muhammadu Buhari’s cabinet over a top government official who was reinstated without knowledge of the president. Abdulrasheed Maina, who is on corruption wanted list was reinstated as Director of the Human Resources Department.

For over two years allegations have lingered that Maina, the former Chairman of Pension Reform Task Team (PRTT) allegedly stole over $2 billion of pension funds through fraudulent biometric contracts and has been on the wanted list of the Economic and Financial Crimes Commission for his involvement. Steve Oronsaye, former head of service, is also allegedly an accomplice in the fraud.

How he was reinstated

Findings by Caracal Reports revealed that the Maina’s official reinstatement was perpetrated by his co-Northerners in government who secretly carried out the plans without the knowledge of the president.

In a statement, the Minister of Interior, Abdulrahman Dambazau also a suspect in the case, said it was his duty to recall a suspended staffer.

“The ex-Chairman of the Presidential Task Force Team on Pension Reforms, Abdulrasheed Maina was posted a few days ago to the Ministry of Interior by the Office of the Head of Service in an Acting capacity to fill a vacancy created following the retirement of the Director heading the Human Resources Department in the Ministry.

“It is understood that Maina’s last posting was with the Ministry of Interior, and that is probably why he was re-posted back to the Ministry.

“It is, therefore, improper for anybody to think that a Minister could exercise such powers or influence the process of Discipline, Re-engagement, and Deployment of any civil servant to his Ministry or any other Ministry for that matter. Again Such responsibility is that of the Federal Civil Service Commission and/or the Head of Civil Service,” the statement read.

It is alleged the country’s Attorney General of the Federation, Abubakar Malami directed the reinstatement of the corrupt and wanted official.

According to documents obtained by Caracal Reports, the FCSC approved the reinstatement of Maina. 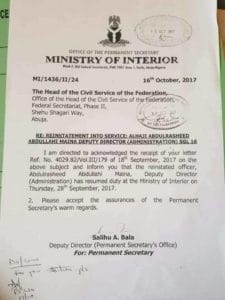 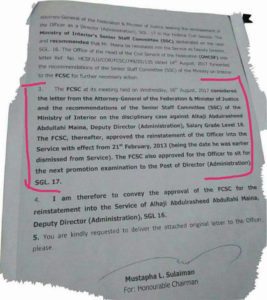 “The FCSC at its meeting held on Wednesday, 16th August, 2017 considered the letter from the Attorney-General of the Federation and Minister of Justice and the recommendations of the Senior Staff Committee (SSC) of the Ministry of Interior on the disciplinary case against Alhaji Abdulrasheed Abdullahi Maina, Deputy Director (Administration), Salary Grade Level 16. The FCSC, therefore, approved the reinstatement of the Officer into the Service with effect from 21st February 2013 (being the date he was earlier dismissed from Service). The FCSC also approved for the Officer to sit for the next promotion examination to the Post of Director (Administration), SGL. 17,” the statement read.

Mr. Wilson Uwujaren, head of Media and Publicity of EFCC, said “Maina was declared wanted over his alleged role in the N2bn pension scam.

He stated the commission had charged Maina; alongside Steve Oronsaye, former Head of Service of the Federation, Osarenkhoe Afe and Fredrick Hamilton of Global Services Limited before a Federal High Court on 24 counts.

According to the notice on the commission’s website, Maina is wanted “for offenses bordering on Procurement Fraud and Obtaining by False Pretenses.” Additionally, he was accused in “over N 2 billion Pensions Biometric Scam in the office of the Head of Civil Service of the Federation. He remains at large after charges were filed against his accomplices.”

On outrage that trailed the development, President Buhari ordered Maina’s immediate disengagement from the civil service. He also called for an investigation into how he was recalled despite being on EFCC’s wanted list.

The statement signed by Service Assistant Director of Media Relations, Mr. Mohammed Manga said, “The reinstatement and posting of Abdulrasheed Maina never emanated from the Office of the Head of the Civil Service of the Federation”.

“In issuing the directive that Maina should be immediately disengaged from service, Mr. President acted on a new set of facts. One, for leaving the service without permission; he ran away from the country. And two, for the embarrassment he has brought to the government,” the source said.

The president after ordering immediate disengagement of the former chairperson of the Presidential Task Force on Pension Reforms civil service also demanded a full report of the activities that led to his recall from the Head of Civil service, Winifred Oyo-Ita.

“Consequently, the purported reinstatement and posting by the Office of the Head of the Civil Service of the Federation are totally erroneous and misleading,” Manga said.

Ekiti State Governor, Mr. Ayodele Fayose in his reactions to the development, described

President Buhari’s directive for the immediate disengagement of former Chairman of the Presidential Task Force on Pension Reforms, as “an afterthought”. “The President only acted to save his face from the global embarrassment caused him by the outcry of Nigerians on the news of Maina’s reinstatement.”

Governor Fayose, through his aide Lere Olayinka, demanded the immediate arrest and trial of Maina as well as a firing of all those who perpetrated his reinstatement, which he described as fraudulent and shameful.

Fayose likened Buhari’s anti-corruption fight to a situation where “Satan is calling Judas Iscariot a sinner.”

While citing other cases to prove that Buhari’s government is weak in its fight against corruption he said, “When the Minister of State for Petroleum Resources Ibe Kachikwu raised allegation of award of $25 billion contracts without following due process against the Group Managing Director (GMD) of the Nigerian National Petroleum Corporation (NNPC); Dr. Maikanti Baru, the Presidency was the one that defended him (Baru).”

Despite Nigerians call for action, President Buhari has refused to follow through on the report from the committee who investigated the $43 million discovered in an apartment at Osbourne Towers, Ikoyi, and Lagos.

Additionally, a coalition of five civil society groups has called on President Muhammadu Buhari to direct that all officials involved in the reinstatement of the former chairman of the Presidential Task Force on Pension Reforms, Alhaji Abdulrashid Maina, should be fired to save the government from further embarrassments.

Among the leaders of the group; top Nigerian human rights activist Charleyboy Oputa said the only way Buhari could save himself from the embarrassment caused by the recall of Maina was to prosecute all the allegedly accused in the process.

In a statement signed by Charles Oputa for #OurMumuDonDo, Deji Adeyanju for Concerned Nigerians, Ariyo Dare Atoye for Coalition in Defence Of Nigerian Democracy, Bako Abdul Usman for Campaign For Democracy, and Moses Paul for MAD Connect, “The only way President Buhari can redeem his image is to order a speedy investigation into the matter and to sack all officials in his administration involved in Alhaji Maina’s reinstatement, including the Attorney General of the Federation on whose legal advice the reinstatement was done in the first place.

“Anything less will reveal the Buhari administration for what it truly is – a hypocritical administration that is prepared to look away when corruption is perpetrated by cronies and close family members which will only act when public outcry is intense.”

Trouble looms for AGF, others

President Buhari may summon the Attorney General of the Federation, Abubakar Malami and the Minister of Interior, Abdulrahman Dambazau over the recall of the fugitive.

A report submitted by Mrs. Oyo-Ita might indict the AGF and his counterpart, thereby leading to their request for an explanation.

In a text message to Caracl Reports Correspondent, Senior Special Assistant to the President on Media and Publicity, Malam Garba Shehu, stated that Oyo-Ita’s report was being studied.

The situation, according to a source ( the source chose to be anonymous because of the sensitivity of the case) has put the Aso rock in a tense mood with people holding meetings upon meeting to save their jobs.

“For now, the AGF and the interior minister need to explain their own sides of the story to the president. Any other official linked to the thing will also be invited for explanations,” the source said.