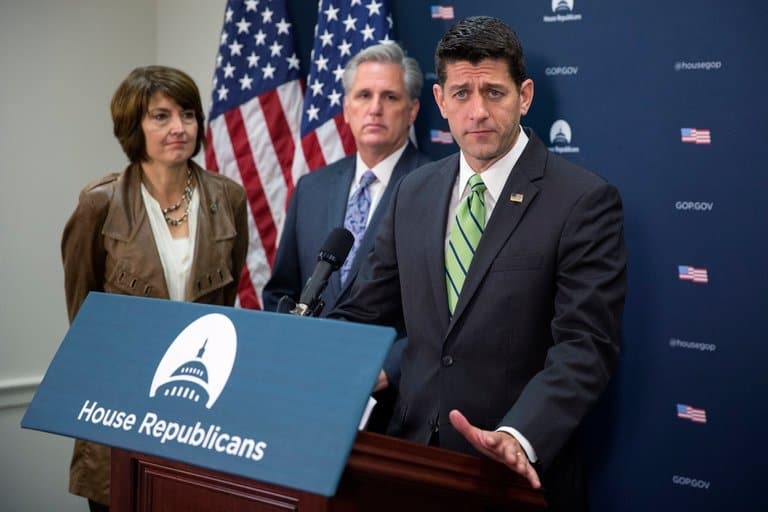 Thursday the House of Representatives voted on a budget resolution that would allow Congress to accelerate a tax reform bill; a major legislative effort that Republicans are desperate to push forward.
The 216-212 vote allows Republicans to begin work on a $1.5 trillion tax cut and move it through Congress without fear of blocking tactics by Democrats. The tax bill is the top item on the GOP agenda and would be Trump’s first major win in Congress.

Growing frustration over the proposal to eliminate a popular tax deduction had some Republicans threatening to rally together and vote with Democrats in opposition to the budget.
The current tax reform framework calls for eliminating the State and Local Tax deduction (SALT), a tax break used by nearly one-third of filers. Cutting the deduction would help Republicans raise more than a trillion dollars to aid tax cuts over 10 years, making it a massive source of revenue for their overall plan to reform the tax code.

Republicans from New York, New Jersey, Illinois and California argued their constituents expect the deduction. While some are open to making changes to SALT — such as capping the income level at which taxpayers could use it — others don’t favor any kind of compromise and want tax writers to leave SALT alone.

“My solution is to take it off the table,” said Republican Rep. Leonard Lance of New Jersey.
While more than 30 Republicans represent districts in high-tax states, it was unclear late Wednesday just how many of them would oppose the budget.

The House passed a budget earlier this month, but the Senate made some changes when it approved it last week, kicking it back over to the House.

One of those changes was language targeting deductions like SALT, which is why some lawmakers — like Lance — said they would oppose the budget even if a deal is worked out.
“The preference is to keep the state and local tax as is,” said Republican Rep. Tom Reed of New York. “Clearly, in my opinion, that is not going to be the case, so then the question becomes, is there a compromise position that we can live with?”

The state and local tax deduction were one of the earliest deductions that Republicans announced would be eliminated, and the uproar was swift. The House GOP is expected to unveil text of its bill November 1st, and members warn that there will be a dozen more changes to the tax code that will upset members and various constituencies.

Mere hours before President Donald Trump was set to attend a lunch with GOP senators on Tuesday to discuss tax reform, Sen. Bob Corker said Congress should be allowed to do its work without interference from the White House as Republican leaders vie to control blowback as they make way for a GOP budget plan – paving the way for a 10-year, $1.5 trillion tax cut measure that’s now the highest priority of The President and his GOP supporters.

“Tax-writing committees in the Senate and the House are going to be laying out the $4 trillion in loophole closings that need to take place. Hopefully, the White House will step aside and let that occur in a normal process,” he told NBC’s “Today” show. “I know recently, the White House in a couple of cases has been taking things off the table. I would just say, there’s a lot of work to be done. The spinach part of this, the tough part of this, is upcoming over the next several weeks.”
The president, however, took to Twitter on Tuesday morning to say Corker “couldn’t get elected dog catcher in Tennessee.”

The underlying budget measure which abandons the Republican Party’s longstanding battle to rein in deficits in favor of President Donald Trump’s promise for “massive tax cuts.”
Ways and Means Committee Chairman Kevin Brady says he’ll schedule a panel debate and vote once the budget plan is safely passed, and much of the buzz in the Capitol concerned a flurry of horse trading as Republicans struggled to find ways to raise revenues to help finance cuts to individual and corporate tax rates. The goal is a full rewrite of the inefficient, loophole-laden tax code in hopes of lower rates for corporations and other businesses and a spurt of economic growth.

Brady, for instance, told reporters on Wednesday morning that he’s still looking at curtailing tax-free deposits in 401(k) retirement accounts, a move that could raise revenue in the near term as retirement savings shift to Roth-style accounts that are funded with after-tax earnings. Rep. Carlos Curbelo, R-Fla., said the move would help expand a tax credit in which the government contributes to retirement accounts for low- and middle-income taxpayers.

A measure of this nature could be problematic for some who contribute up to 10 percent of their tax-free earnings towards their 401(k).

Trump says he opposes curbing 401(k) donations, however, which tossed a monkey wrench into the process.

“The president will get much of what he wants I think in tax reform, but we are a co-equal branch,” said Sen. Pat Toomey, R-Pa. “And we’re going to write it.”
Sen. Ron Johnson, R-Wis., came out squarely against reducing the cap on 401(k) contributions in an interview on CNN Thursday morning.

Key decisions about tax brackets, including a new bracket for high-income, $1,000, 000 plus earners, has yet to be finalized. Outcomes on other provisions are unsettled as well, lending a sense of chaos as GOP leaders flurry to fulfill a goal of passing the measure through the House before November 23rd.
“To do tax reform, you need money. And right now, even as we speak, they appear to be going wobbly on some of the issues they’ve raised with great certainty in previous weeks,” said top Ways and Means panel Democrat Richard Neal of Massachusetts. “They’ve got a revenue problem, a real revenue problem. And you have to make some dramatic changes to benefits that people across America have come to expect and enjoy.”

Republicans view passage of the tax measure as a career-defining dream, and its importance has only grown in the wake of the party’s debacle on health care. But the tax plan’s popularity is not a given with voters.

First, comes action on the GOP budget plan, which under Washington’s arcane rules is nonbinding but would set up special procedures to pass follow-up tax legislation without the threat of a filibuster by Senate Democrats.

The tax cuts would add up to $1.5 trillion to the deficit over the coming decade, however, as Republicans have shelved fears about the growing budget deficit in favor of a once-in-a-generation opportunity to rewrite tax laws.