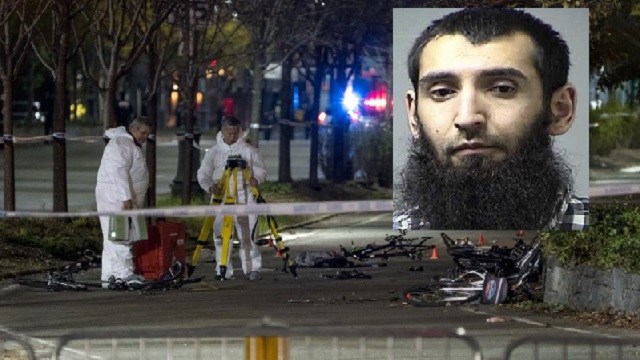 NEW YORK — The West Side Highway bike path, a somewhat famous pedestrian path for tourists and locals, was forever transformed on Tuesday when Sayfullo Saipov barreled down pedestrians driving for 14 blocks before crashing into a school bus. He is alleged to have killed 8 and injured 11 bringing about the deadliest terrorist attack on New York City since 9/11.

Saipov, 29, a young immigrant from Uzbekistan is believed to have perpetrated these acts as a “lone wolf” and is being considered a terrorist.

New York City and it’s leaders defiant in the wake of the incidents followed through on their Halloween festivities late last night as early reports from Saipov’s contacts began to emerge.

Officials who were not authorized to discuss the investigation and spoke on the condition of anonymity identified Saipov as the attacker and said he came to the U.S. legally in 2010 and it is believed that he lived first in Ohio after his arrival.

The United States granted him a permanent resident visa in 2010 under the Diversity Immigrant Program, ABC New York reported. The program is meant to increase the number of immigrants from countries with low rates of U.S. immigration.

The program awards 55,000 green cards a year, a majority of which go to people in African and Eastern European nations, according to U.S. Citizenship and Immigration Services. Congress has tried to end the Diversity Visa lottery program five times since 2007.

The program’s future most recently came into question when the Reforming American Immigration for a Strong Economy (RAISE) Act, sponsored by Senator Tom Cotton (R-Ark.), called for its elimination as part of a broader reduction in legal immigration.

In its statement supporting the bill, the White House called the Diversity Visa lottery program “outdated,” adding that it “serves questionable economic and humanitarian interests.”

Saipov applied for the program in 2008 and was granted a Diversity Visa two years later.

From its independence from the Soviet Union in 1991 until last year, Uzbekistan was ruled by Islam Abduganiyevich Karimov, whose authoritarian rule pushed many of its residents to emigrate. ISIS also has a presence in Uzbekistan and recruits militants from there.

Uzbekistan said to be one of the most oppressive countries in the world where “Patterns of radicalization for Uzbeks are somewhat similar to that of migrants from other countries, an inability to fit into the society where they live, an inability to live the American dream. So they are looking for ways to belong, and extremist narratives seem to be the most attractive,” said Erica Marat, a Central Asia expert at the College of International Security Affairs.

The tragic events shifted the mainstream media coverage away from Robert S. Mueller’s Russian probe into the 2016 elections, poising Trump for even stronger opposition to visa programs. “I have just ordered Homeland Security to step up our already Extreme Vetting Program. Being politically correct is fine, but not for this!,” he tweeted Tuesday night.

An acquaintance, Dilnoza Abdusamatova, said Saipov briefly stayed with his family in a Cincinnati suburb upon immigrating. “He always used to work,” Abdusamatova told The Cincinnati Enquirer. “He wouldn’t go to parties or anything. He only used to come home and rest and leave and go back to work.”

Authorities said Saipov had a Florida driver’s license and some public records showed an address for him at a Tampa apartment complex.

Michael Roberts, 30, an overnight shift worker, said he was asleep when the agents showed up at about 5:30 p.m. but that they interviewed his cousin. He said both he and his cousin had moved in only a week ago and had never heard of Saipov.

A friend who met Saipov in Florida, Kobiljon Makarov, told The New York Times and the New York Post that he seemed like a “very good guy.”

Officials said Saipov was living recently in New Jersey, where he allegedly rented a Home Depot pickup truck an hour before driving it onto the bike path.

On Tuesday night, police investigating the deadly rampage surrounded a white Toyota minivan with Florida plates parked in the parking lot of a Home Depot in Passaic, New Jersey.

The van was parked near the company’s rental trucks.

The ride-hailing company Uber said Saipov passed its background check and drove for the service for six months, making more than 1,400 trips.

The company said it banned him from the service after the attack. It said it was in touch with the FBI and offered its assistance and that it was reviewing Saipov’s driving history but found no related safety reports.

Records show Saipov was a commercial truck driver who formed a pair of businesses in Ohio.

The first business, Sayf Motors Inc., used the address of a family friend near Cincinnati with whom Saipov had stayed for a couple of weeks after his arrival in the country.

The second, Bright Auto LLC, used an address near Cleveland.

According to the records, a warrant was issued for Saipov’s arrest in April 2016 when he missed a hearing on a misdemeanor for not having the right brakes on his vehicle. He resolved the case in November 2016 by pleading guilty and paying $200 in fines and court costs.

With no digital footprint and no social media accounts linked to Saipov emerged immediately after the attack, but there were possible clues to his personal life.

A marriage license filed in Summit County, Ohio, lists a man by the name of Sayfulloh Saipov marrying Nozima Odilova on April 12, 2013. It lists the same Cleveland-area apartment noted as the headquarters of Bright Auto LLC.

The license lists Saipov as a truck driver. His wife is about six years younger. Both list Tashkent, Uzbekistan, as their hometown.