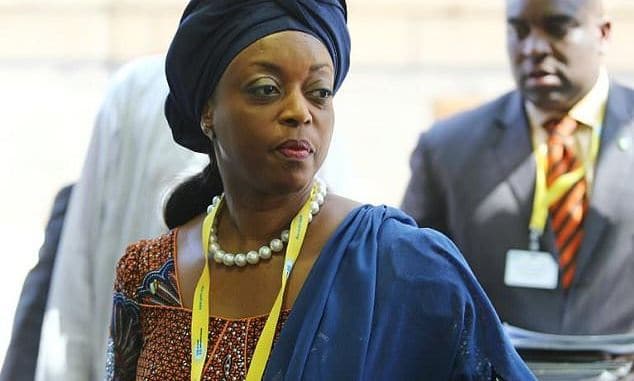 A Federal High Court in Lagos State, Nigeria, has dismissed an application by the former Minister of Petroleum Resources, Mrs. Diezani Alison-Madueke. Mrs. Madueke in the petition had asked the court to compel the Attorney General of the Federation, Mr. Abubakar Malami, to allow her back to Nigeria.

Diezani had brought the application before the court asking to come back to brought Nigeria to defend a criminal charge on her alleged money laundering of N450 million.

It will be recalled that Mrs. Alison-Madueke had traveled to the United Kingdom shortly after leaving office in 2015.

Through an application filed on her behalf by her lawyers, she asked the court to grant her the opportunity to defend the charges against her. Diezani was mention in the suit in the allegations made against Mr. Dele Belgore (SAN); and former Minister of National Planning, Prof. Abubakar Suleiman by the Economic and Financial Crimes Commission (EFCC).

Belgore and Suleiman were charged before Justice Rilwan Aikawa on February 8, 2017, for allegedly collecting N450 million from Mrs. Alison-Madueke and laundering it in the build-up to the 2015 general elections

In a ruling on the application on the issue agreed with the EFCC, an anti-graft agency, Justice Rilwan Aikawa, explained that the application is misconceived and amounts to “a misuse of the court process.”

The court also held that having not been listed as a defendant in the charge, there is no offense yet being made against her, and she is “merely crying wolf where there is none.”

According to the judge, the former minister of petroleum did not also deny the claims of the EFCC that she is currently on bail in the UK where she is being investigated for several financial crimes and her filing of the application was merely a ploy to escape justice in the United Kingdom.

Aikawa ruled that the court would not be used to achieve this aim. In the final analysis, he declared that Mrs. Alison-Madueke’s application lacks merit and it is accordingly dismissed.

The court has proceeded with the trial of the case.

Meanwhile, the EFCC, which filed the charges, claimed that the N450 million was part of an enormous sum of $115 million, which the former Petroleum Minister allegedly doled out to compromise the 2015 general elections.

The SAN and the Professor were arraigned on five counts, in four of the counts, Mrs. Alison-Madueke’s name was mentioned, but she was declared as being “at large.”

In her application seeking to be joined as a defendant in the charges, the former Minister argued that since her name had been mentioned in the charge, it would be against her right to a fair hearing for the case to proceed without affording her the opportunity to defend herself.

She also contended that contrary to the declaration by the EFCC that she was at large, she was in the UK and was willing to return to Nigeria so that she could appear in court to take her plea and defend the charges.

Her application prayed for an order “mandating the Attorney General of the Federation, being the agent of the complainant, to facilitate her prompt appearance in court on the next adjourned date, to take her plea and to defend the allegations made against her in the counts of the charge.

But the EFCC had opposed the move.