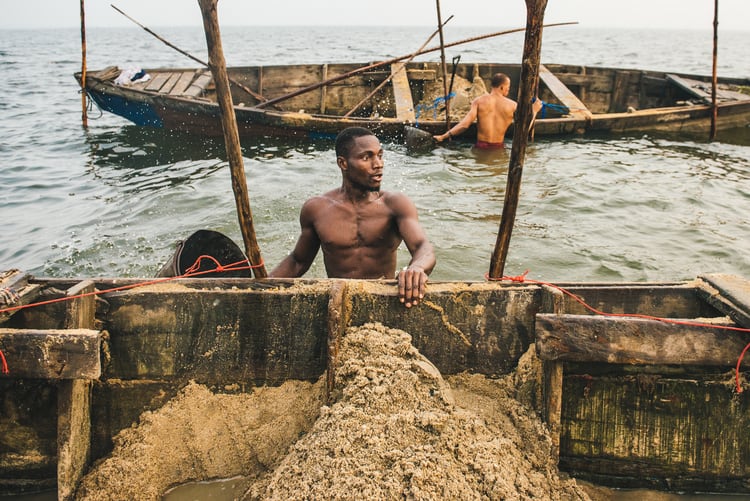 A communal war is brewing in some rural but developing communities in Nigeria as both residents, and their traditional leaders engaged in a do-or-die battle over scooping for laterite deposits as the State Governments fold their arms.

The dredgers, are allegedly mobilized by some traditional leaders in the communities and are bent on scooping laterite deposits in Oke-Afa, Magboro and Akute-Lambe areas of Ogun state (one of the major industrial hub of the country); and Epe, Badagry and Eti-Osa areas of Lagos State ( the commercial center of Nigeria). The residents are set to defend their environment with the last drop of their blood. The battle was gradually reaching its climax when a recent fracas claimed lives and property worth several millions of naira.

The acts of illegality run contrary to the law of states in the country. For instance, the legislation enacted in 2004 by the fifth Lagos State House of Assembly, was entitled: “A Law To Provide For The Regulation And Grant of Permit To Any Person Conducting Sand Dealing And Dredging Operation In Lagos State And For Connected Purposes.”

The law stipulates that every person, corporation, partnership, or body involved in sand dealing or sand-dredging operation should obtain an operating permit from the state. To the rules, illegal mining is a perilous business that nobody should be involved in and that the governments are not in any way unmindful of the danger it poses to the socio-economic landscape of the state.

Though several State Governors have empowered relevant security agencies with diverse professional equipment ranging from surveillance helicopters to speedboats to tame the menace, the Nigerian Police had prosecuted none of the culprits.

Government Abandoned Us To Our Faith – Residents

A resident of Oke-Afa, Magboro, and a pharmacist, Mr. Gbenga Ayoola, 35, told Caracal Reports that some land-grabbers, also known as Omo-Onile in (Yoruba) local parlance, use heavy-duty trucks to scoop laterite very close to the fences of houses in the area.

According to him, anytime the residents challenge the land-grabbers, it always leads to battle, which leads to bloodshed most times. Unfortunately, he alleged that the state governors have refused to stop the menace or pay more significant attention to any potential threats to the environment.

“Most times, they break into people’s houses to scoop laterite. If the occupants of the buildings have gone to work, they scoop around the perimeter fence, and that has crashed several bricks. Whenever the residents are indoors, they come with some local security personnel. Our predicaments were worsened by heavy rainfall, which adversely affected houses constructed on a sandy foundation.

Another resident of Brentfield, Magboro and a medical doctor, Dr. Charles Okafor, said, “Our situation is always pathetic, especially during the rainy season. At that time, we don’t take our cars to the office most of the days because it uses to be very challenging driving through the roads, as the roads become slippery.”

Another victim was a senior woman who moved in barely a month before the Driggers demolished her house. She reportedly fainted immediately after the demolition and was subsequently rushed to a hospital where she passed on.

One of the children of the deceased, Bolaji, told our correspondent, “My mother died from shock due to the demolition of her house, but what could we have done about it?”

However, our correspondent spoke to Ogun State government officials, who said that since the case was still in court after two years, they would not comment.

The residents of Epe, Ibeju-Lekki, Eti-Osa, and Badagry, Lagos State also share part of the sufferings and challenges.

The concerns of the residents, especially the environmentalists among them, is that the state government has not put necessary protective measures to guide the coastlines from deterioration in the face of dredging and several mining activities that permeated across the nooks and crannies of the state.

The President, Nigerian Conservation Foundation, Mr. Izoma Asiodu, explained that the importance of Lagos as a coastal city and as the economic nerve Centre of the most populous country in Africa make it imperative to pay attention to any potential threat to its economy.

“The whole planet is being threatened by climate change and rapid population growth and increased consumer demands and development projects. If the environment is not protected, the recent developments like road infrastructure, housing, agricultural will be counter-productive,” he said.

Sand, the best around -Dredgers

However, the dredgers explained their side of the story.

One of them, Mr. Waheed Sanni, who is also one of the sons of the traditional ruler of Oke-Afa, Magboro, argue that the dredging business was very lucrative and he is not ready to stop anytime soon.

“We get the sand free from the community and a truck of 20,000 tonnes is sold for N30, 000 ($83), and sell as much as six loads every day. The sand at Oko-Filling is very good. It has premium quality compared to what obtains in other places. This is why we prefer this place,” he declared.

Implications on the environment- Experts

According to him, it has implications for human health and the environment itself. “Some marine plant growth can be released from sediments during dredging, with a risk of triggering algal blooms, which are a health risk for consumers of shellfish.

“Another biological risk from dredging involves the transportation of species in dredgers from one part (or even country) to another. Exotic marine pests are now recognized as a major environmental hazard and steps must be taken to minimize their transportation to new environments.”

Similarly, the Chief Executive Officer, Fatecrown Construction, Mowe, Ogun State, Mr. Adebayo Oladimeji, said, “When you dredge where people stay, it is quite dangerous because it will affect the topology (soil) of the area and that will also affect the water level.”