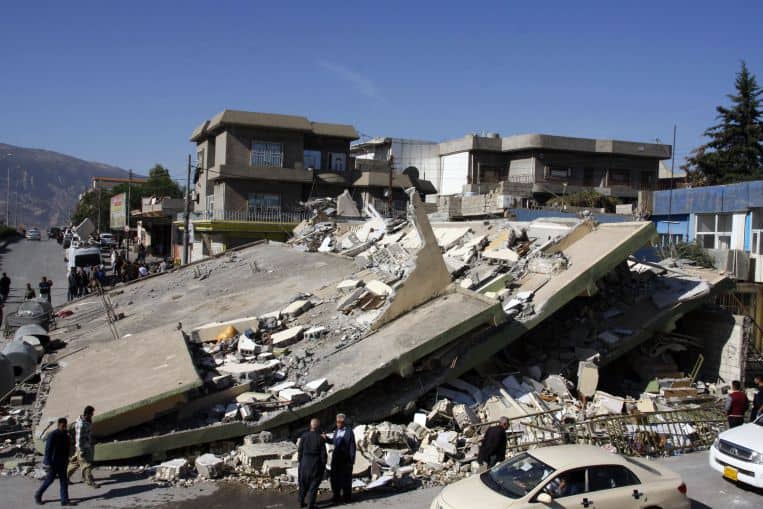 In a frantic search for survivors Iranians spent the night digging through rubble in search for survivors after a powerful 7.3 magnitude earthquake; felt as far away as Turkey and Pakistan struck the border region between Iraq and Iran late Sunday killing more than 300 hundred people and injuring at least 4,000 officials said.

Iran reported the most deaths, though seven people are said to have died in the Kurdish region of northern Iraq.

Approximately 100 of the dead are believed to be from one town in Iran’s Kermanshah province, the country’s semiofficial Mehr news agency reported on Monday.

The epicenter of the quake was near Ezgeleh, Iran, about 135 miles northeast of Bagdad and is said to have shaken across the Iraq-Iran border reaching a depth of 23 km (just over 14 miles) according to the US Geological Survey. Aftershocks were felt in Pakistan, Lebanon, Kuwait and Turkey news agencies in those countries reported.

Citizens were urged to stay away from buildings as well as refrain from using elevators in a warning issued by Iraqi’s Meteorological Organization.

In a tweet, Monday, Iraqi Prime Minister Haider al-Abadi said he “instructed civil defense teams and health and aid agencies to do all they can to provide assistance” to those affected by the quake.

In Iran, the countries Supreme Leader Ayatollah Seed Ali Khamenei sent a message of condolence and urged military and civilian help to the dispatched quake victims.

Farhad Tarji, a member of Parliament for Sarpol-e Zahab, told the semiofficial news agency ILNA that the quake had stricken his family. “I’ve lost 15 people,” he said.

Iran’s Revolutionary Guard were reportedly traveling to the affected areas to help with rescue efforts, according to Iran’s semi-state-run Tasnim news agency.

A dam hit by falling rocks in Iraqi’s semi-autonomous Kurdish region killed four people in Darbandikhan. The head of the Dam, Rahman Shikhani said cracks were spotted in the upper part of the structure, but there was no water leakage.

One image from Sarpol-e Zahab appeared to show the near-destruction of an apartment block recently built for low-income families. Another, posted on the website Khabar Online, showed a pickup truck transporting victims under colorful blankets.

The Iranian government newspaper posted a video on its website in which a resident of Sarpol-e Zahab complained that no help had come.

“There has been no help yet, neither food nor water, no clothing, no tents, there is nothing,” said the resident, a man who appeared to be in his 30s, while standing in the street with collapsed buildings. “There are no facilities yet. We’ve slept outside since last night. This is the condition of our homes. Our electricity, water, gas, phone lines are out; everything is completely out, the whole city has been destroyed, it is wrecked.”

Iran sits on a major fault line between the Arabian and Eurasian plates and has experienced some earthquakes in the past.

A 6.6 magnitude earthquake struck in 2003, the most deadly on record; killing 26,000 people in the city of Bam, southeast of the country.

In June of 1990, an estimated 37,000 people were killed, and the northern cities of Rudbar, Majil, and Lushan were destroyed along with hundreds of villages.

A 6.4 magnitude quake rocked the city of Zarand in the southeastern province of Kerman in 2005, killing at least 400 people and in 2012 a pair of earthquakes jolted northwest Iran, killing at least 300 people.