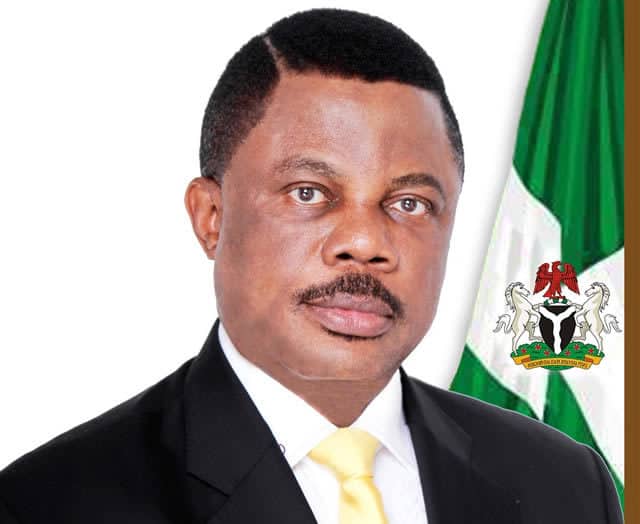 It was a big surprise to political pundits across Nigeria as Anambra state incumbent governor, Willie Obiano, defiled the federal might of All Progressive Party, APC, to win his second term in office.

The governor also besmirched the political sagacity of the previous president of the country, Mr. Godluck Jonathan, who gave total backing in ensuring that his party, people Democratic Party claim victory in the election.

Obiano, who was the candidate of the All Progressives Grand Alliance, won in all the 21 local government areas of the state with a total of 234,071 votes.

Obiano’s victory is believed to be a signal to the country’s ruling party, APC, ahead of the general election bided for 2019.

Despite the backing of President Muhammadu Buhari and political experts in the party, the ruling party could not record victory in the gubernatorial election.

Some days ago, President Muhammadu Buhari was witnessed in Akwa in a mega rally where he campaigned for his party’s governorship candidate, Tony Nwoye.

Governors, lawmakers, and ministers also accompanied the president from the party including Rochas Okorocha of Imo and Muhammed Abubakar of Bauchi.

Following this, the former president Goodluck Jonathan also made his trip to Anambra state to help his party, PDP canvass people of the state in voting his party’s flag bearer, Oseloka Obaze.

Despite Buhari’s efforts and his predecessor’s efforts to cling the state from the ruling party, Anambra citizens remained static with their traditional party, APGA and re-elected their governor.

After the election which observers have said was free and fair enough, the Returning Officer for the election, Zana Akpagu, the Vice Chancellor of the University of Calabar, declared Mr. Obiano, the incumbent governor, as winner having polled the highest number of votes in the election.

The APC candidate, Tony Nwoye, who polled a total of 98,752 votes, followed Mr. Obiano, by a wide margin.

Mr. Obinano, while giving his victory speech, appreciated the electorates and the contestants. He also called on the losing candidates to join him in sailing the state’s ship successfully.

The returning governor also called on the citizens of the state not to relent in their efforts to support him in his second term in office to record a better success.

Meanwhile, the candidate of UPP, Mr. Chidoka, candidate has already accepted defeat in the election, saying the APGA candidate won because of his financial muscle.

But the candidates of the two major parties, APC and PDP are yet to congratulate the winner.

Political observers are of the opinion that the defeated candidates of APD and PDP, may embark on a legal battle with Obiano as there were complaints of electoral malpractice by the winning party during the election.