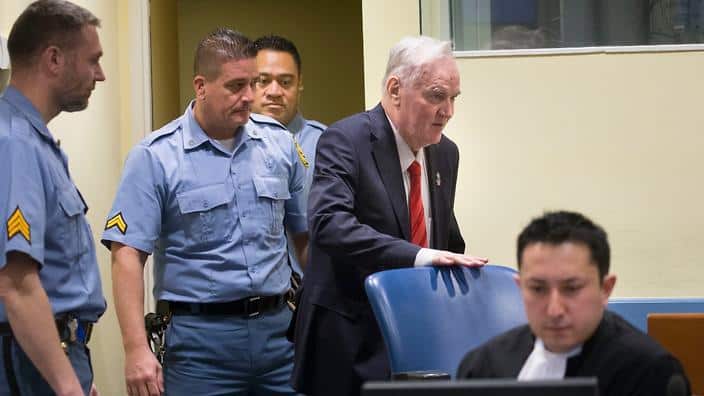 Ratko Mladic, nicknamed 'Butcher of Bosnia' was sentenced to life by a UN tribunal for genocide

Sentenced to life in prison by the United Nation’s war crimes tribunal on Wednesday; military chief Gen. Ratko Mladic, a Bosnian Serb, was convicted of genocide and crimes against humanity in the slaughter of Bosnian Muslims during the breakup of Yugoslavia.

Mladic was found guilty of commanding forces responsible for crimes during Europe’s worst mass killing since World War II; the deadliest three-year siege of the Bosnian capital, Sarajevo, and the 1995 massacre of some 8,000 Muslim men and boys in the eastern enclave of Srebrenica.

Mladic was the chief military commander of the campaign to drive Muslims, Croats and other non-Serbs off their lands in efforts to make a new homogenous state for Bosnian Serbs.

Mr. Mladic was found to have orchestrated a campaign of so-called ethnic cleansing that made the small nation of Bosnia and Herzegovina, with its 4.5 million people, the site of some of the worst atrocities of Europe’s bloody 20th century.

Croats, Serbs and Bosnian Muslims (also known as Bosniaks) all committed atrocities during the 1991-95 violence that ensued after Slovenia, Croatia and Bosnia voted for independence from Yugoslavia.

The tribunal convicted some Croats and Bosniaks. But the majority of trials involved Bosnian Serbs because crimes in the name of Serbian interests and extreme nationalism were committed on a far more significant scale. Of the 130,000 people who lost their lives in the Balkan wars of the 1990s, 100,000 died in Bosnia.

Mladic’s handwriting was authenticated; listed meetings, including numerous times with the Serbian president, topics of discussion, strategy laid out, orders for ammunition and troop movements. In one telling entry on May 7, 1992, Mladic wrote that the Bosnian Serb leadership had discussed six strategic goals, of which the first and most important was “to separate from the Croats and Muslims forever.”

Also a first; the prosecution’s evidence from a recently explored mass grave around an open-pit mine at Tomasica near Prijedor in Northern Bosnia which proved to be a dumping ground for Bosniaks killed or starved to death during the ethnic cleansing campaign where police operated concentration camps that became notorious for torture and rape.

The International Commission on Missing Persons, which uses DNA testing, said this month that so far 656 bodies from the mine have been identified, most of them men, all of them in civilian clothes. Those recognized were among the nearly 6,000 people reported missing around Prijedor in the summer of 1992 as reported on by The New York Times.

Mladic’s lawyer asked for a delay because the general was suffering high blood pressure. The judge refused, and Mladic burst out with criticism. After Mladic was ordered to leave the room, Presiding Judge Alphons Orie read the judgment saying, “The crimes committed rank among the most heinous known to humankind.”

Mr. Mladic’s case was the last major trial handled by the International Criminal Tribunal for the Former Yugoslavia, which the United Nations established in 1993 in response to the atrocities. After one final appellate ruling, expected later this month, the tribunal will close its doors; a small successor court will deal will other pending appeals and the retrial of two former intelligence chiefs from Serbia.

Prosecutors sought a life sentence, while Mladic’s defense lawyers said he should be acquitted on all counts.