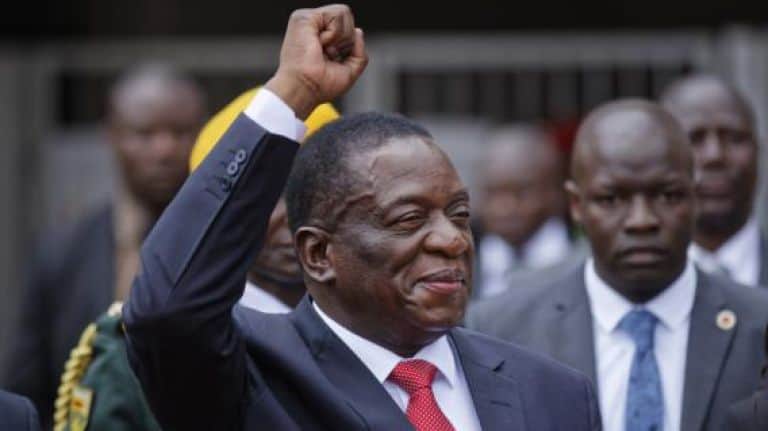 In his address, Mr. Mnangagwa said the country’s domestic politics had “become poisoned and rancorous and polarizing,” apparently referring to the factional fighting inside the governing party, ZANU-PF.

“We dare not squander the moment,” he said, his sense of promise matched the joyful mood of a nation hungry for change after Mugabe’s 37-year rule. The former leader resigned Tuesday after pressure from the military, former allies in the ruling party and massive street protests.

“We must work together. You, me, all of us who make up this nation,” Mnangagwa said, urging the millions of Zimbabweans who have left the southern African country to contribute to their homeland’s reconstruction.

Mnangagwa referred to one of Mugabe’s signature policies, saying farmers will be compensated for the often violent land seizures starting around 2000 that drew international condemnation and sanctions and contributed to the country’s economic slide. It is unclear where Zimbabwe would get the funds for such compensation.

“As we bear no malice towards any nation, we ask those who have punished us in the past to reconsider their economic and political sanctions against us,” said the president, who himself remains under U.S. sanctions for his activities as Mugabe’s enforcer, a role that earned him the nickname “Crocodile.”

Mnangagwa was a minister of state security during the army killings of thousands of people when Mugabe moved against a political rival in the 1980s and was justice minister around the time that the farm takeovers started. He was in the Cabinet at the time of a violent crackdown on opponents in the 2008 presidential election.

In a show of regional support for Zimbabwe’s new leader, the presidents of Botswana, Mozambique and Zambia attended the inauguration, with the crowd cheering Botswana’s leader Ian Khama for his past calls for Mugabe to step down.

Zimbabwean military commander Gen. Constantino Chiwenga also got a big cheer from the tens of thousands in the stadium. His forces staged a takeover last week amid alarm over a perceived power grab by a ruling party faction loyal to Grace Mugabe. The act of sending tanks into the streets triggered the national clamor leading to her husband’s resignation.

While Mnangagwa said “let bygones be bygones” in his speech and has warned against retaliation, human rights activists and lawyers already were reporting moves against some figures linked to Mugabe’s wife.

Ignatius Chombo, the finance minister under Mugabe, was assaulted after the military swept in and will appear in court Saturday in connection with allegedly corrupt land deals, said his lawyer Lovemore Madhuku.

He said charges against Chombo, who has not been seen in public since the military takeover, were read out Thursday while he lay in bed at a government-run hospital.

Elsewhere in the capital, long lines formed outside banks, a common sight in a nation struggling with cash shortages and other severe economic problems that the new president will have to confront.

Mr. Mnangagwa has for decades been part of Zimbabwe’s ruling elite.

Despite his pledges, he is still associated by many with some of the worst atrocities committed under the ruling Zanu-PF party since the country gained independence in 1980.