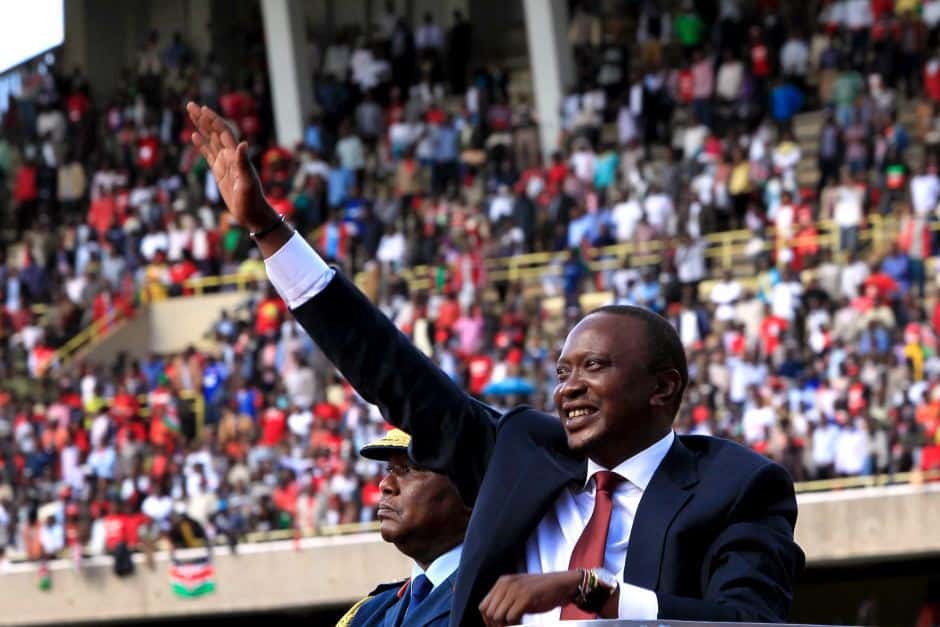 Uhuru Kenyatta was sworn in for a second – five-year term as Kenya’s President to a crowd of 60,000 Tuesday, laying to rest the political turmoil bubbling up in the country during recent months.
Cheering supporters, many clad in red and yellow Jubilee party colors and carrying Kenyan flags, filled the stadium benches while outside police fired tear gas at the opposition’s planned rival gathering.
Kenyatta won the October 26th election after the August election was boycotted by the opposition leader Raila Odinga, amid allegations of vote tampering.
Kenya’s Supreme Court ruled last Monday the October 26 presidential do-over met all the constitutional requirements, paying the way for Kenyatta to take the presidential oath.
Odinga boycotted the October rerun, saying it would be unfair because the election commission had failed to implement reforms. Kenyatta won with 98 percent of the vote.
As the largest economy in East Africa, Kenya is a crucial trade route to the continent and has provided a significant buffer of stability in the region.
The presidential race — and subsequent election-related violence — has thrown east Africa’s wealthiest country into political chaos, revealing deep ethnic divisions.
Kenyatta is a member of the country’s largest community, the Kikuyu, originating in the country’s central highlands. The Kikuyu have long been accused of wielding high economic and political power in the country. Odinga is part of the Luo community, which some say has become increasingly marginalized in recent years.
Political arguments often have ethnic undercurrents, with Odinga’s supporters pointing out that three of the country’s four presidents have come from one ethnic group, although the country has 44 recognized groups.
“I … do swear … that I will always truly and diligently serve the people of the Republic of Kenya,” Kenyatta said, his hand resting on a Bible.
“A return to the political backwardness of our past is more than unacceptable. It is intolerable … This divide cannot be bridged by dialogue and compromise,” Odinga’s National Super Alliance opposition alliance said in a statement.
The opposition planned to hold a prayer meeting in the capital on Tuesday, saying it wanted to commemorate the lives of Odinga supporters killed during confrontations with the security forces over the election period as more than 70 people have been killed in political violence this election season, mostly by the police.
According to Reuters, a team at the scene of the planned rally said the area had been sealed off by seven trucks filled with police in riot gear. Two water cannons were standing by, and a helicopter hovered overhead.
Police began firing teargas in nearby residential areas two hours before the rally was due to start, apparently attempting to prevent opposition supporters from gathering.
Several roads were blocked by burning tires, rocks, glass and uprooted billboards. Police shot into the air to disperse anyone trying to gather.
According to Human Rights Watch and Amnesty International in October, up to 67 people could have been killed nationwide in election-related violence between the initial vote in August and mid-September.