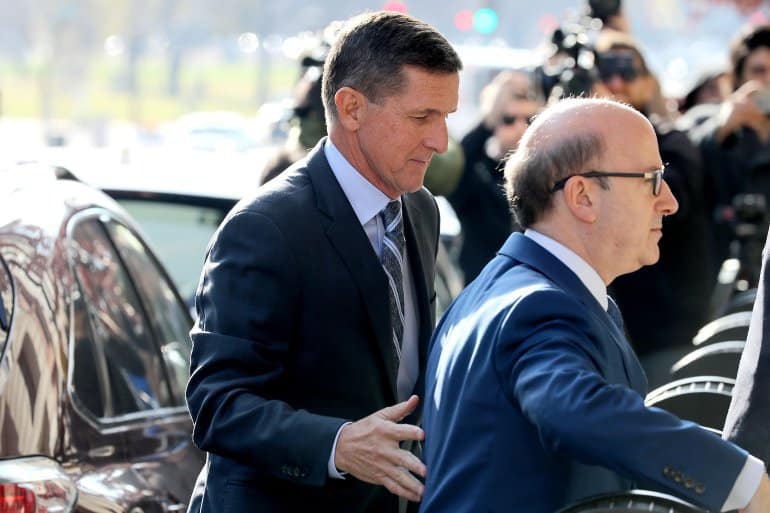 Retired General Michael T. Flynn, who campaigned alongside Donald J. Trump in his quest for the presidency and then served as his first national security advisor, pleaded guilty Friday to lying to the FBI about reaching out to Russians on Trump’s behalf. Flynn also eluded to members of the president’s inner circle being intimately involved with and at times directing — his contact.

The Associated Press confirmed the senior officials were Trumps’ son-in-law and senior advisor, Jared Kushner as well as Deputy National Security advisor KT McFarland, who is now up for an ambassadorship.

Flynn’s plea, to a single felony count of false statements made by him, is the first official of the Trump White House to admit guilt so far in the criminal investigations by special counsel Robert Mueller.

Such a development provides a crucial element to the wide-ranging criminal investigations into possible coordination between the Trump campaign and Russia — to influence the 2016 U.S. presidential election in Trump’s favor because it means Flynn is now required to cooperate with federal investigators.

His admission to lying to the FBI regarding multiple conversations last December with the Russian ambassador to the United States doesn’t resolve the paramount question of possible Trump-Russia coordination in the campaign.

Court papers reveal the senior Trump transition officials — including Kushner and McFarland were fully aware of Flynn’s outreach to Russian officials in the weeks before the inauguration.

McFarland’s involvement was confirmed by two former transitions officials who spoke on the condition of anonymity because they weren’t authorized to discuss the matter publicly. One of the officials confirmed Kushner’s involvement, according to the AP.

The revelation moves the Russia investigation more in-depth into the White House. And, given the direct involvement of the transition team in Flynn’s calls with Ambassador Sergey Kislyak, the plea also raises questions about the accuracy of repeated assertions by the administration that Flynn had misled Mike Pence and other officials when he denied having discussed sanctions with the diplomat.

Accepting responsibility for his actions in a written statement, Flynn the longtime solder, stood quietly during his plea hearing except to answer brief questions. He said he had also been subjected to false accusations, “My guilty plea and agreement to cooperate with the Special Counsel’s Office reflect a decision I made in the best interests of my family and of our country.”

A former Defense Intelligence Agency chief, Flynn was a considerably more vocal Trump surrogate during the campaign, known for leading rally crowds in “Lock her up” chants regarding Hillary Clinton’s use of a private email server.

The prosecutors also had investigated Flynn lobbying work on behalf of the Turkish government. The fact that he was permitted to plead guilty to just one count, and faces a guideline range of zero to 6 months in prison, suggest that prosecutors see him as a valuable tool in their investigation and are granting a degree of leniency in exchange for cooperation.

White House lawyer Ty Cobb sought to distance the plea from Trump himself, saying: “Nothing about the guilty plea or the charge implicates anyone other than Mr. Flynn.”

Nonetheless, the Russia investigation has persistently followed Trump the first year of his presidency, angering the president and repeatedly distracting from his agenda. Flynn’s plea came as Republican senators labored to pass a far-reaching tax bill, which would be a significant victory for Trump.

On Friday, the president ignored reporters’ shouted questions as he welcomed the Libyan prime minister to the White House, and aides canceled media access to a later meeting between the two. He did appear briefly at an afternoon White House holiday reception for the media, where he offered season’s greetings and departed without addressing the Mueller investigation.
Early on in his administration, Trump had taken a particular interest in the status of the Flynn investigation. Former FBI Director James Comey, whose firing in May precipitated the appointment of Mueller as special counsel, has said Trump asked him in a private Oval Office meeting to consider ending the investigation into Flynn. Comey has said he found the encounter so shocking that he prepared an internal memo about it.

Flynn, who was interviewed by the FBI days after Trump’s inauguration, was forced to resign on Feb. 13 following news reports indicating that Obama administration officials had warned the Trump White House that he had discussed sanctions with Kislyak and was therefore compromised and potentially vulnerable to blackmail.

White House officials including Pence, who had declared publicly that Flynn never discussed sanctions, said they had been misled.

The court case Friday concerns a series of conversations that Flynn had with Kislyak during the transition period between the November election and the Jan. 20 inaugurations.

Prosecutors say Flynn on Dec. 29 spoke with an unnamed senior transition team official about what, if anything, to say about sanctions that had been imposed on Russia one day earlier by the Obama administration in retaliation for election interference. Flynn then requested the Russian ambassador “not escalate the situation” and respond “in a reciprocal manner,” a conversation that prosecutors say he then reported to transition team members.

Still, if the Trump transition made secret back-door assurances to Russian diplomats, that could potentially run afoul of the Logan Act, a 1799 law that bars private American citizens from attempting to intervene in “disputes or controversies” between the United States and foreign powers without government approval.
Another conversation with Kislyak occurred one week earlier after a “very senior member” of the presidential transition team directed Flynn to contact foreign government officials, including from Russia, about a U.N. Security Council resolution regarding Israeli settlements. That “very senior member” was identified to AP as Kushner by a former transition official.

In a striking rupture with past practice, the Obama administration refrained from vetoing the condemnation of the settlement expansion, opting instead to abstain. The rest of the 15-nation council, including Russia, voted unanimously against Israel. At the time, Israel was lobbying furiously against the resolution, and the Trump team spoke up on behalf of the Jewish state.
Former U.S. officials and foreign diplomats said Kushner led the effort to defeat that U.N. vote.
During his conversation with Kislyak, prosecutors say, Flynn requested that Russia vote against or delay the resolution, though he admitted in his plea deal that he later lied to the FBI by saying he had not made that request.