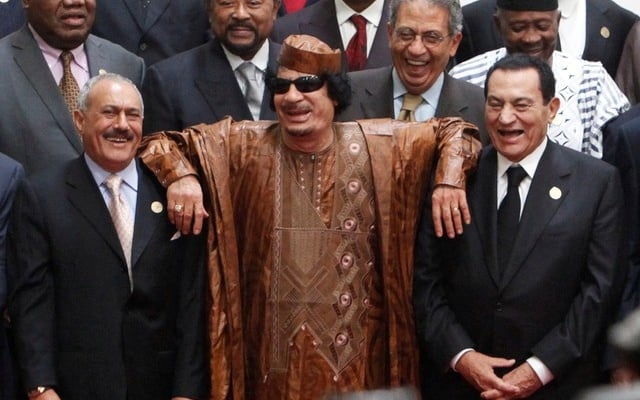 Yemeni rebels killed their erstwhile ally Ali Abdullah Saleh, the country’s former president and strongman, as their forces battled for control of the capital, Sanaa, officials said. The collapse of their alliance throws Yemen’s nearly 3-year-old civil war into unpredictable new chaos.
The circumstances of Saleh’s death were unclear, but Houthi officials said their forces caught up with him as he tried to flee Sanaa.
A video circulating online purported to show Saleh’s body, his eyes open but glassy, motionless with a gaping head wound — being carried in a blanket by rebel fighters chanting “God is great” who then dump him into a pickup truck. Blood stained his shirt under a dark suit.
For a figure who was able to rule the impoverished and unstable country for more than three decades and remained a powerhouse even after he was ousted in a 2011 Arab Spring uprising, it was a grisly end. His death recalled another Arab leader killed in the midst of his own country’s revolution, Libyan leader Moammar Gadhafi, whose body was shown in a video being abused by rebels who brought down his regime in 2011.
Several Houthi military officials said Saleh was killed as he headed along with top party leaders from Sanaa to his hometown of Sanhan, nearby. Houthi fighters followed him in 20 armored vehicles, attacked and killed him and almost all those with him, the officials said, speaking on condition of anonymity because they were not authorized to talk to the press. A Houthi media official, Abdel-Rahman al-Ahnomi told the Associated Press that Houthi fighters killed Saleh as he tried to flee to Saudi Arabia through the province of Marib, to the east of the capital.
The Saudi-led coalition had hoped that Saleh’s break with the Houthis would be a turning point, isolating the rebels. Over the past days, fighter jets from the Saudi-led coalition pounded Houthis positions, throwing support behind Saleh and fueling divisions with Houthis. Hadi’s government had expressed willingness to turn “a new page” with whoever stands against the rebels.
The fighting left Sanaa divided. The Houthis dominate the northern part of the city, while Saleh’s forces hold the southern region, with much of the current battle concentrated around the Political District, home to ministries and foreign embassies. The Houthis appeared to be targeting the homes of Saleh’s family, political allies, and commanders.
Civilians living in the area are mostly cut off from the outside world.
Witnesses said the bodies of slain civilians and fighters littered the streets, as no ambulances were able to reach the area. The ICRC says at least 125 people have been killed and some 240 wounded in Sanaa since the fighting began Wednesday.
During his more than 30 years in power, Saleh was known as the man who “dances on the heads of snakes” for his mastery of shifting alliances, playing both sides or flipping sides in the multiple conflicts tearing apart Yemen.
In the 2000s, he was a key ally of the U.S. in the fight against al-Qaida, taking millions of dollars in American aid to hunting down the group’s branch — even as he was accused of striking alliances with the militants and using them against his enemies. During his rule, he fought multiple wars against the Houthis in northern Yemen, only to side with them against his former vice president-turned-successor, Hadi, after he lost power.