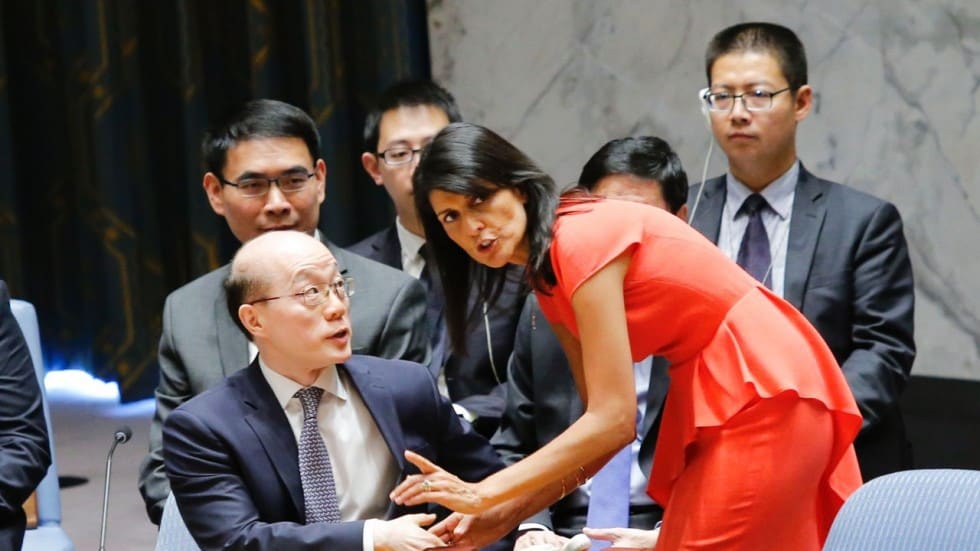 Diplomats gathered at the United Nations Security Council this morning to discuss the situation of human rights in North Korea – a country which experts say has the worst human rights conditions in the contemporary world.

But before the meeting could get underway, there was a hold-up.

The ambassador of China said (not in so many words) that the Security Council meeting was only going to cause trouble and stir up resentment; China seemed to believe that the meeting was a self-righteous display on the part of the US. The Chinese ambassador also warned that publicly criticizing North Korea would only anger the Hermit Kingdom:

“At present, the situation on the peninsula remains complex, sensitive and grave. Council members and relevant parties should engage themselves with finding ways to ease tensions on the peninsula. They should avoid mutual provocation and words or actions that might further escalate the situation. Council’s discussion of the human rights issues in the DPRK runs counter to the above objective and is counter-productive.

In the event, China lost the vote, and the meeting went on.

The United States invited two women who had defected from North Korea and are now living in the United States. Nikki Haley, the US ambassador, asked the women to stand before she denounced the Kim Jong Un regime for spending all its money on nuclear weapons and ballistic missiles, while its people go hungry. She argued that in fact, human rights are inextricably linked to international issues: Haley said that, by systematically keeping his people down, Kim Jong Un is mustering the strength he needs to develop an effective nuclear arsenal:

“The systematic human rights violations and abuses of the North Korean government are more than the cause of its people’s suffering. They are a means to a single end: Keeping the Kim Jong Un regime in power. The regime is using that power to develop an unnecessary arsenal and support large conventional military forces that pose a grave risk to international peace and security. Their menacing march towards nuclear weapons begins with the oppression and exploitation of ordinary North Korean people. Through the export of workers abroad to earn hard currency and the use of forced labor at home, the regime uses its people to underwrite its nuclear and ballistic missile programs.”

UN reports estimate that at least half of North Korea’s citizens suffer from “food insecurity” – which means they simply don’t get enough to eat. Crucially, this includes many pregnant and nursing women, as well as children under the age of five, who risk permanent damage from malnutrition. The UN estimates that half of North Koreans also suffer from “medical security,” meaning that they have no access to the doctors and medicine they need.

Japan’s ambassador Koro Bessho pointed out that North Korea has forcibly kidnapped many Japanese citizens, including a 13-year-old girl. These kidnapped citizens have never been returned home; their families have no news of them. Bessho pointed out that their families are getting older – some have passed away without ever seeing their kidnapped loved ones again. “There is no time to waste,” he said, urging the international community to take action.

“Even George Orwell would be surprised” by conditions in North Korea, the ambassador of Ukraine said, as he listed some of the crimes against humanity committed in North Korea – torture, rape, forced labor, capital punishment for religious or political dissent.

After the Security Council meeting, the United States organized a side event in which Michael Kirby, the author of a 2014 UN report on North Korea, discussed some of the human rights atrocities in North Korea. He described a young woman who had been forced to drown her newborn child in a river, as a punishment for defecting and marrying a non-Korean man. He described starvation, concentration camps, and torture.

Few people disagree that human rights conditions in North Korea are abysmal. The question is, will the United Nations do more than merely talk about this issue? Is this, in fact, only a bit of theater? Or will something more be done?