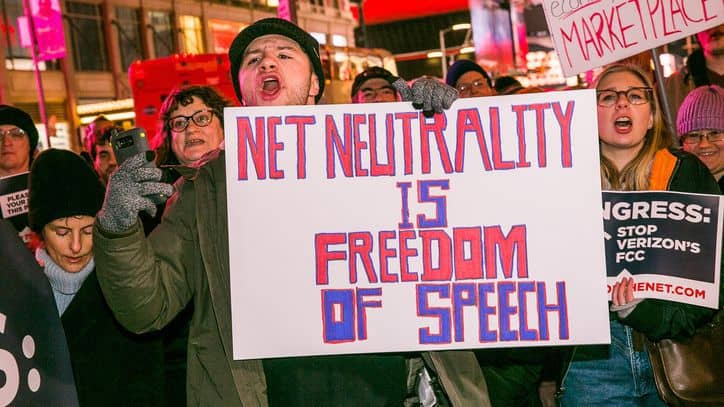 In a 3-2 party-line vote on Wednesday, the Federal Communications Commission repealed net neutrality regulations established during the Obama administration. Telecom companies long sought the move by Republican commissioners and faced fierce opposition from leading internet and technology companies. The regulations were prevalent among the public, 83% of whom supported keeping the rules in place.
Net neutrality refers to policies that require internet service providers to treat all traffic on their networks the same, without differentiating based on the user or the content. Its supporters argue that the policies encourage competition and innovation by ensuring that content providers have equal ability to reach an audience, and fear that providers will restrict or impede access to individual sites or types of content to charge customers more or prevent competition. Opponents of the regulations, like FCC Chairman Ajit Pai, say that the rules stifle innovation among providers and choice for customers.

The United States Court of Appeals for the DC Circuit ruled in a 2014 case that the FCC could only impose net neutrality regulations on providers if they classified them as common carriers regulated under Title II of the Communications Act. In 2015 the FCC voted to reclassify ISPs as common carriers, making it unlawful for them to discriminate against users, or unjustly advantage or disadvantage different content.

The election of President Donald Trump in 2016 shifted the partisan balance on the FCC, and in 2017 he replaced Democratic Chairman Tom Wheeler with Pai, a Republican who had voted against the 2015 reclassification. Under Pai, the FCC quickly began the process of reversing their decision.

Without the requirements of Title II regulation, net neutrality advocates fear that ISPs will be able to charge additional fees for access to specific sites, either to users or the owners of the sites. Another fear is that providers will reduce speeds or block sites that compete with properties they own.

Supporters of the decision point to a reduction in investment in broadband capital expenditures following the reclassification. They believe that the FCC’s decision will increase investment by telecom companies, thus providing customers with unspecified innovations.

Because appeals of the Commission’s decision can delay implementation, the rules are not expected to go into effect immediately. Internet activists are expected to file lawsuits challenging the action quickly.

In addition to litigation, opponents of the decision will likely appeal to Congress to intervene. However, given the number of Republican lawmakers who voiced their support for the FCC’s decision, it’s doubtful that the current Congress will take any action.

Also, New York Eric Schneiderman and some other states AG have promised to sue FCC to get the decision reversed.

I will sue to stop the FCC’s illegal rollback of #netneutrality. New Yorkers and all Americans deserve a free and open internet. pic.twitter.com/BNW7TDsp4z