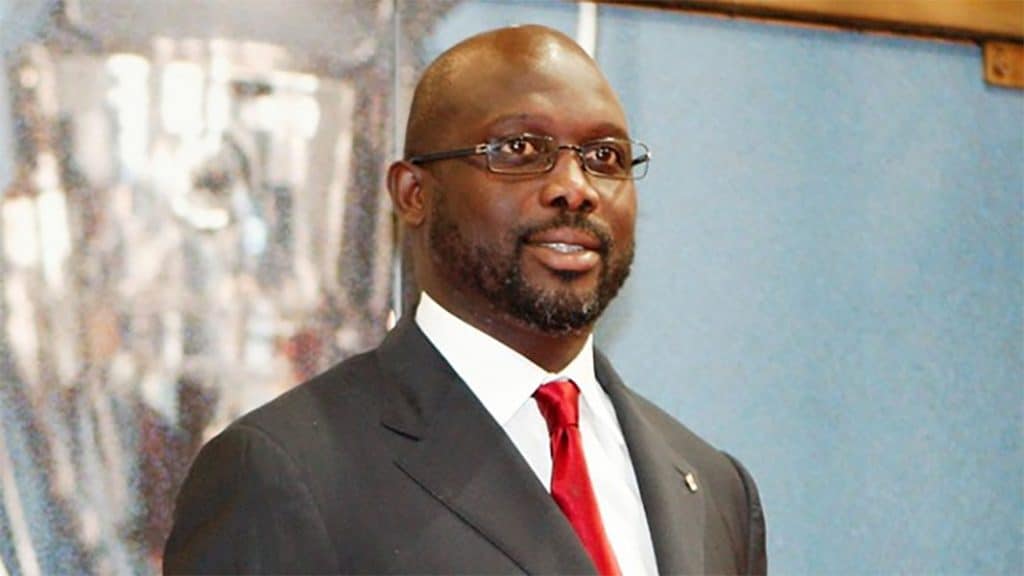 Former FIFA World Player of the Year, George Weah, has promised more jobs and a better future to the 2.1 million Liberian registered voters as he draws curtains of his campaign rally in Monrovia, nation’s capital, ahead of the presidential election on December 26.

The only African to win the prestigious award, Weah of the Congress for Democratic Change party won in the first round with 38.4 percent of the votes that put him 10 points ahead of Vice President Joseph Boakai who will face him in the Boxing Day run-off.

The result shows how support has grown steadily for the former AC Milan striker, who lit up television screens in Liberia in the 1990s with his mazy runs, briefly distracting fans from a 1989-2003 civil war that killed tens of thousands.

Weah has served as a senator from the opposition CDC since 2015, after returning home from an international soccer career to immerse himself in politics. As a political novice in 2005, he lost to Johnson Sirleaf in a presidential election.

At the rally in Monrovia, he promised to give the people of one of the poorest nations jobs through investments in agriculture, free schools, and hospitals.

He is wildly popular among the youth and the disenfranchised, especially in the shanties of the rundown seaside capital Monrovia. Many of them feel they have not benefited from Liberia’s post-war recovery, a sentiment that has counted against Boakai.

Meanwhile, while as the registered voters choose a new leader on Tuesday in a run-off between Vice President Boakai and football icon Weah, the event is expected to mark the country’s first democratic transition since 1944.

After seven weeks of delays caused by legal complaints lodged by Boakai’s ruling Unity Party against the country’s electoral commission, polling stations are due to open at 8:00 am (0800 GMT) and close at 6:00 pm for the registered voters.

Weah’s CDC has urged voters not to drink too much on Christmas Day and to get up early on the 26th to cast their ballots in what National Elections Commission chairman Francis Korkoya has said is “one sacrifice for the good of our democracy and country.”

They will choose a successor to President Ellen Johnson Sirleaf, who is due to step down in January after 12 years at the helm of the West African nation, resurrecting it from the ashes of civil war (1989-2003) and overseeing the response to the Ebola crisis (2014-16).

In the first round of voting on October 10, Weah topped the poll with 38.4 percent while Boakai came second with 28.8 percent, triggering a run-off as neither made it past the 50 percent needed to win outright.

“It’s too close to call,” said Ibrahim Al-Bakri Nyei, a Liberian political analyst at London’s School of Oriental and African Studies (SOAS). Weah was in a similar position in 2005 when he lost despite widespread predictions of victory.

Given the date of the vote, “it’s likely to have a lower turnout than the first one,” he predicted.

Praising a violence-free electoral process so far, Sirleaf said in a recent speech that “the ballot box has replaced bullets and electoral disputes are settled through the courts” — a sign of how far Liberia has come since the war.

Boakai’s Unity Party joined forces with the opposition Liberty Party to challenge what he said were “massive irregularities and fraud” in the results, but the Supreme Court found the allegations could not be proved, and observers had declared the vote credible.

A final attempt to stay the vote and hand responsibility for a new date to parliament was dismissed Thursday by the country’s top court.

Meanwhile, horse-trading for the support of the 18 unlucky presidential candidates in the first round has resulted in few certainties save for Weah’s endorsement by warlord-turned-preacher Prince Johnson, who is extremely popular in the populous county of Nimba.

Ex-footballer Weah was also pictured at a public event with Sirleaf on Thursday, heightening speculation that she will endorse him over the vice president she served with for 12 years.

As Liberia’s most famous son, Weah attracts huge crowds and has a faithful youth following in a country where a fifth of the electorate is aged 18 to 22, but he is criticized for issuing vague promises and for his long absences from the nation.

Weah held a boisterous final rally in Monrovia on Saturday, while Boakai was expected to hold his last mass meeting with supporters on Sunday.

“You know I’ve been in competitions –- tough ones too and I came out victorious. So I know Boakai cannot defeat me,” Weah said. “I have the people on my side.”

His campaign chair Ansu Sonii admitted the date was “a challenge,” but added: “All these court marathons were meant to slow us down, but we remained resolute.”

liberians are grateful peace has held through Sirleaf’s two terms in office, living standards in Liberia remain dire for most and have become the focus of the campaign, giving Boakai a steep path to tread after serving at her side for two terms.

He faces accusations the government did too little on corruption and spent two terms pressing for donor funds abroad rather than focusing on issues at home. Some have also questioned the wisdom of taking on the electoral commission.

“Now that the court has clarified things we have no option but to go for the political fight,” said Herbert Nagbe, a Boakai supporter in Monrovia.

Whoever wins the vote faces an economy battered by slumped commodity prices for its main exports rubber and iron ore and a rapidly depreciating currency.