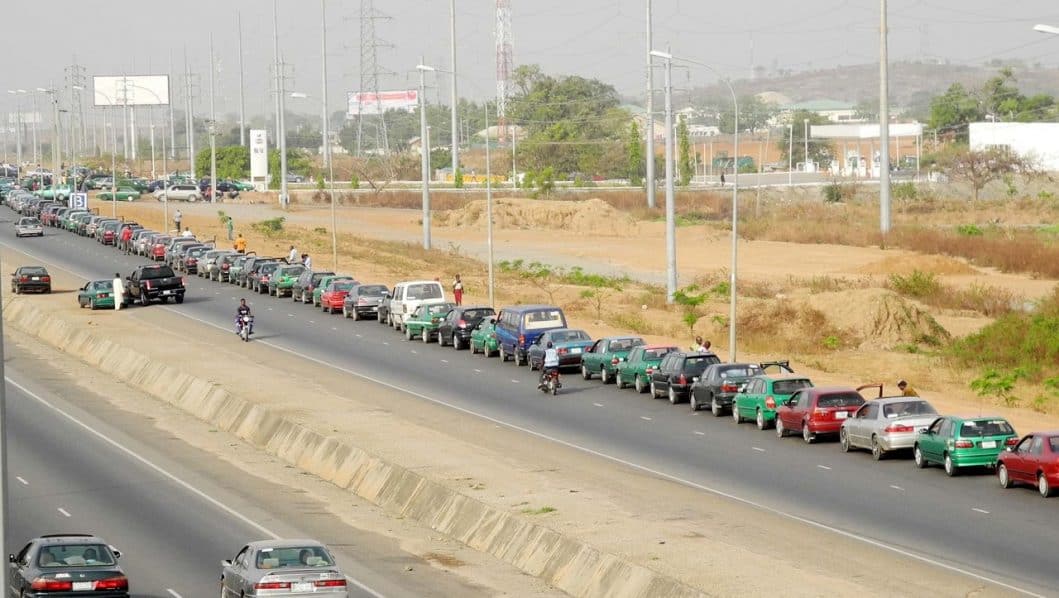 As Christians celebrate the birth of Jesus Christ, Nigerians groan with hardship under the government of President Muhamadu Buhari. Fuel scarcity is the latest among many problems to have paralyzed the festive period.
Fuel scarcity has persisted all over Nigeria for more than a week resulting in severe agony for the citizens who now find it difficult to move from one location to the other.
Caracal Reports’ findings revealed that the situation has led to 100% hike in transportation fare all over the country, thereby leading to several people stranded at bus stations.
At the beginning of the fuel scarcity, both the Minister of State for Petroleum Resources, Ibe Kachikwu, and the Group Managing Director of the Nigerian National Petroleum Corporation, NNPC, Maikanti Baru, had promised that normalcy would return to the country in few days.
But currently, the situation had gone from bad to worse with most filling stations are closed due to lack of fuel supply.
Our correspondent gathered reports across some states in the country.
In Lagos state, several gas stations were closed, and few of the filling stations that had the product were selling for N300 against the regulation price of N145 by the government.
It was also observed that the situation led to 100% increase in transportation fare, leaving several citizens stranded at various bus parks.
A citizen, Oyetunji Bukola, who spoke to our correspondent lamented that “We regret voting for Buhari in this country. Things were not this worse when PDP was in government. Today made it two days that I have been on this cue to buy fuel. As you are looking at this car, I cannot boast of one-liter fuel in its tank. I don’t mind the price they will sell it, all I am after is to get as little as ten liters that will take this car back home. Buhari and his people have ruined this country”.
A commercial driver, Femi Samuel, told our correspondent that “We have made a big mistake to have voted APC two years ago. I have been in this filling station for more than 12 hours, and I don’t know what my fate looks like. This government does not have anything to offer us than hardship. We have made a big mistake by voting these people. This bus is the only means to put food on the table for my family. Now that I don’t have fuel to work again, what will I do? We are doomed in this country.
Meanwhile, in Osogbo, Osun state capital, citizens were reported taken into a protest against the state governor, Mr. Raufu Aregbesola over the development.
It was also gathered that few filling station that was in operation, including the Nigeria National Petroleum‎ Corporation, NNPC, depot were flooded by motorists with queues extending up to five kilometers. It was also learned that a liter of fuel in Osun state is sold for N250.

In Ekiti and Ondo states, petrol was sold between N190 and N250 per liter at few filling stations that had the product.
It was gathered that some independent marketers sold as high as N250 in some parts of Ekiti state.
Meanwhile, in the federal capital territory, Abuja, commuters are also groaning with the same situation.
Our correspondent gathered that the situation had led to increasing the price of food and other things.
The country’s ruling party, All Progressive Congress, while reacting to complaints of the citizens, said: “oil marketers caused the looming scarcity.”
It was also gathered that the party’s spokesperson, Bolaji Abdullahi said the scarcity lingered because more Nigerians bought more cars under Buhari administration.
The Ekiti state governor, while reacting asked President Muhammadu Buhari to resign from office if he cannot solve Nigerian’s problem. Fayose also alleged that the lingering scarcity was a way to increase the fuel price from N145 to N200 per litter.
“Buhari should resign if he doesn’t know how to rule this country. How will you call yourself a president and people will be going through a problem like this? Nigerians deserve a better living standard. I understand that the situation is a way to increase the fuel price to N200 per litter”, Fayose said.
Meanwhile, President Muhammadu Buhari has assured all Nigerians that better days are ahead of the nation despite its current challenges.
Buhari in his Christmas message which was made available to journalists in Abuja said: “I am deeply convinced that better days are ahead for us as a nation as we make progress on all the major fronts where we have set our energies to surmount the challenges.”