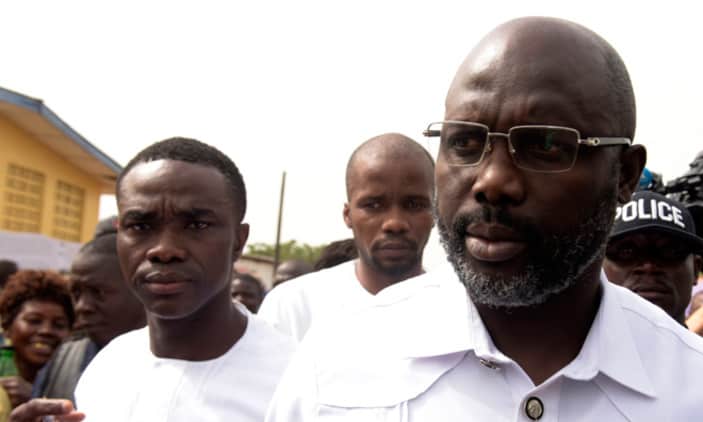 A former FIFA footballer of the Year, George Weah, has been voted president of Liberia after clinching 12 of the 15 counties in the West African country.

Weah appreciated his supporters on Twitter, adding that he plans to liberate the country.

The striker-turned politician would become the 25th president of the country.

“I am deeply grateful to my family, my friends, and my loyal supporters who contributed to our campaign during this extremely long election season,” Weah said on Twitter before the results were announced.

The former African footballer of the year, who voted in Paynesville, Monrovia, was greeted by a crowd of supporters cheering him all the way to the elementary school before he cast his ballot.

Voters hope the election would mark the country’s first democratic transfer of power in over seven decades, despite it being tarnished by allegations of fraud.

Weah has served as a senator from the opposition CDC since 2015, after returning home from an international soccer career to immerse himself in politics. As a political novice in 2005, he lost to Johnson Sirleaf in a presidential election.

At the rally in Monrovia, he promised to give the people of one of the most impoverished nation’s jobs through investments in agriculture, free schools, and hospitals.

He is wildly popular among the youth and the disenfranchised, especially in the shanties of the rundown seaside capital Monrovia. Many of them feel they have not benefited from Liberia’s post-war recovery, a sentiment that has counted against Boakai.

Weah squared up against Vice President Joseph Boakai, with both men promised a break with a heritage of poverty and corruption in a country where most citizens have no reliable electricity or clean drinking water.

They bided to succeed Ellen Johnson Sirleaf in a run-off vote delayed for over a month after Boakai and third-placed Charles Brumskine of the Liberty Party alleged widespread fraud in October’s first-round election, a challenge that the Supreme Court rejected this month.

Meanwhile, the National Elections Commission has confirmed that Liberia’s presidential run-off had gone without any significant incidents and was better organized than the first round, which led the party in the third place to allege electoral fraud,

NEC chairman Jerome Korkoya said polling stations opened at the same time except in three areas where the voting time had been extended and that a few incidents, including a voter who may have tried to vote twice, had been ‘dealt with on the spot’ and were under investigation.

By and large the systems the NEC has put in place, he said, worked with no major incidents to report and voting was peaceful.

There were no reports of violence as voting proceeded in the capital Monrovia, with polling stations opening at 0800 GMT and election agents saying turnout was lower than in the first round in the capital city.

He said, “In precinct number 30126 polling station 1 and that is Mother Sarah School in Zubah Town area, a voter was arrested with two ballot papers, and the police are currently investigating that voter.”