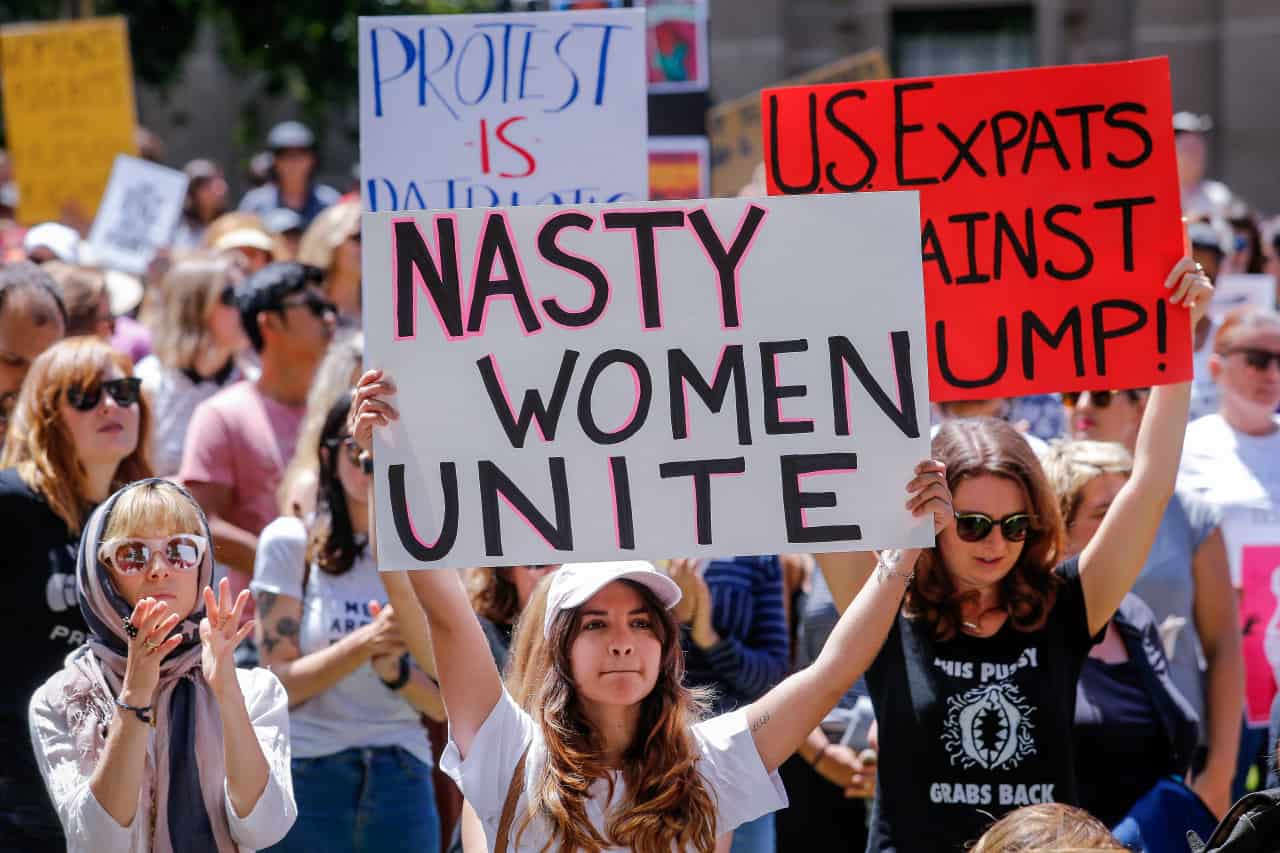 2017 saw many highs and lows. From the Inauguration of president Trump to women’s million match protest a day after the Trump inauguration. There have been many intriguing moments and events that simply took our breaths away.

January 20 – Donald J. Trump is sworn in as the 45th president of the United States.

January 21 – Millions of Americans take to the streets in the United States to protest Donald Trump the day after his inauguration, not including the many thousands of people who took part in the main event — The Women’s March on Washington — for which there was no official crowd estimate.

January 27 – President Trump signs an executive order barring citizens of seven Muslim-majority countries from entering the United States for the next 90 days. It also suspends the admission of all refugees for 120 days. The action prompts thousands of people to protest across the country the next day.

January 30 – The EPA is slapped with a $722 million class-action lawsuit on behalf of more than 1,700 residents impacted by Flint, Michigan’s, dirty water crisis.

February 8 – The US Senate confirms Jeff Sessions as attorney general, after 30 hours of debate, by a 52-47 vote.

March 20 – FBI Director James Comey confirms the FBI is investigating links between Russia and members of the Trump campaign, and whether there’s been any collision during a hearing on Capitol Hill. In a tweet before Comey’s testimony, Trump says no collusion took place.

March 28 – An $87 million settlement, is approved by a federal judge in which the state of Michigan agrees to replace lead or galvanized steel water lines in the City of Flint. The state is responsible for the cost of replacing water lines — the pipes that connect household plumbing to the main distribution pipe running beneath the street — for at least 18,000 Flint households by 2020. The state is also expected to set aside an additional $10 million in federal funds in case replacements cost more than estimated.

April 6 – The United States military launches a strike on a Syrian government airbase in response to a chemical weapons attack that killed dozens of civilians earlier in the week.

April 7 – Neil Gorsuch, a conservative judge, is confirmed by the Senate to the Supreme Court of the United States with a vote of 54-45, mostly along party lines. Only three Democrats: Sens. Joe Manchin, Heidi Heitkamp, and Joe Donnelly, sided with the GOP majority.

May 3 – FBI Director Comey appears before the Senate Judiciary Committee; testifying Russia is actively involved in trying to influence US politics, defending his decision to announce eleven days before election day, the FBI was reviewing additional emails from Hillary Clinton.

June 14 – The Michigan Attorney General’s office announces that several state officials have been charged with involuntary manslaughter in connection with a Legionnaires’ outbreak that killed 12 people during the Flint water crisis.

June 17 – Bill Cosby’s aggravated indecent assault case ends in a mistrial after a Pennsylvania jury of seven men and five women are unable to come to a unanimous decision. Prosecutors immediately announced they would retry the case.

June 21 – A Department of Homeland Security official says that hackers linked to the Russian government targeted voting systems in as many as 21 US states during a Senate hearing.

August 12 – A car slams into a crowd of counter-protesters in Charlottesville, Virginia, killing one and injuring 19 during a “Unite the Right” rally of white nationalist and other right-wing groups. Separately, two Virginia State Patrol troopers monitoring the rally are killed in a helicopter crash. James Fields Jr., of Maumee, Ohio, accused of driving the car in the attack, is charged with second-degree murder, several counts of malicious wounding and failure to stop in an accident resulting in death.

August 21 – The first total solar eclipse to take place in 99 years crosses the United States from coast to coast.

August 30 – After retreating from the Houston area back to the Gulf of Mexico, Harvey slowly moves northeast and hits Louisiana. At least 82 people die from Harvey which also dumped an estimated 27 trillion gallons of rain over Texas and Louisiana during a six-day period, according to WeatherBell, and also set a record for the most rainfall ever from a tropical cyclone in the continental US, at 51 inches of rain.

September 6-8 – Packing winds up to 185 mph, Hurricane Irma makes landfall on the Caribbean island of Barbuda as a Category 5 storm. One of the most powerful Atlantic storms ever recorded. Irma kills at least 38 people and devastates many of the Caribbean islands.

September 10 – The Florida Keys take a direct hit from Hurricane Irma as a Category 4 storm with 130 mph winds. FEMA initially estimates that 25 percent of homes on the island chain is destroyed, and 65 percent have significant damage. Irma moves on to hit Marco Island as a Category 3 storm, then travels up the Gulf of Mexico to pummel Naples, Florida and to Jacksonville, Florida where it causes the worst flooding the city has seen in nearly 100 years. The death toll from Irma in the US is at least 61 people.

September 20 – Hurricane Maria makes landfall near Yabucoa in Puerto Rico as a Category 4 hurricane. It is the most active storm to hit Puerto Rico in 85 years. The energy grid is heavily damaged, with an island-wide power outage. The death toll from Maria is at least 64 people in Puerto Rico.

October 1 – After serving nine years on charges including kidnapping, robbery, and assault with a deadly weapon, O. J. Simpson is released on parole from a Nevada prison.

October 1 – The attack is the deadliest mass shooting in modern US history occurred in Las Vegas when 64-year-old Stephen Paddock of Mesquite, Nevada, opens fire on a crowd of 22,000 concertgoers from the 32nd floor of the Mandalay Bay Resort and Casino, killing 58 people and injuring almost 500. Officials say the gunshots last between 10 and 15 minutes. Officers breach Paddock’s hotel room to find him dead. Authorities said Paddock killed himself and that he acted alone.

October 4 – Attorney General Jeff Sessions releases a memo to all federal prosecutors says stating a 1964 federal civil rights law does not protect transgender workers from employment discrimination and the department will take this new position in all “pending and future matters.“

October 5 – The New York Times releases a story detailing three decades’ worth of sexual harassment and unwanted physical contact accusations by numerous women, including actress Ashley Judd, against movie titan Harvey Weinstein. The piece also mentions at least eight settlements Weinstein had reached with his accusers through the years. Following the release of the story, Weinstein is fired from the Weinstein Company.

October 16 – US Army Sergeant Bowe Bergdahl pleaded guilty to desertion and misbehavior before the enemy in Afghanistan in 2009. He was subsequently captured and held by the Taliban until May 2014. At his sentencing, he receives a dishonorable discharge from the US Army. The military judge also rules that Bergdahl will be required to pay a $1,000 fine from his salary for the next ten months.

October 31 – Sayfullo Habibullaevic Saipov, an Uzbek national who had been living in the US since 2010 barrels down Manhattan’s West Side Highway pedestrian path killing eight people and injuring almost a dozen others. Authorities find a note near the truck used in the incident, claiming the attack was made in the name of ISIS, a senior law enforcement official said. New York Mayor Bill de Blasio calls it an act of terror.

November 5 – A gunman opens fire on a small church in Sutherland Springs, Texas killing 26, including and an unborn child, and wounding 20 others. According to authorities, the gunman, Devin Patrick Kelley, dies of a self-inflicted gunshot wound after being pursued by two local residents.

December 1 – Michael Flynn, former Trump national security adviser pleads guilty to “willfully and knowingly” making “false, fictitious and fraudulent statements” to the FBI regarding discussions with Russian ambassador to the US, Sergey Kislyak.

December 4 – The US Supreme Court allows the newest version of President Trump’s travel ban to take effect pending appeal, marking the first time justices have allowed any edition of the ban to move forward in its entirety.

December 6 – President Trump recognizes Jerusalem as Israel’s capital and announces plans to relocate the US Embassy there. Several days later, in a 128-9 vote, the UN makes a stand against the President’s decision turning deaf ears on his threats to end aid to any country who voted against him.

December 11 – Akayed Ullah, a 27-year-old immigrant from Bangladesh, sets off a homemade pipe bomb in a walkway below Port Authority Bus Terminal in New York, according to police. It partially detonates seriously injuring Ullah. Five other people have minor injuries. Ullah had pledged allegiance to ISIS, officials say.