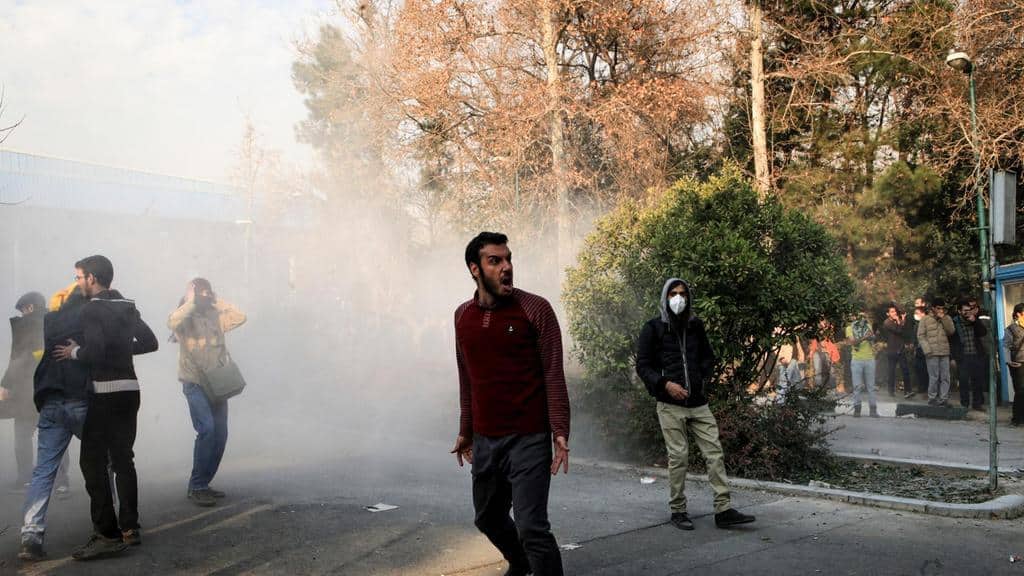 Anti-government protesting in Iran continued into its seventh day Wednesday as the nations Supreme Leader blamed foreign enemies for the unrest. The protests have spread to dozens of Iranian cities by miscalculations in a long-simmering power struggle between hard-liners and reformers.

Unable to ignore the protests, Ayatollah Khamenei responded via Twitter Tuesday saying, “In recent events, enemies of Iran have allied and used the various means they possess, including money, weapons, politics and intelligence services, to trouble the Islamic Republic. The enemy is always looking for an opportunity and any crevice to infiltrate and strike the Iranian nation.”

Nonetheless, the anger behind the protests is directed towards the entire political system.

In response, President Trump tweeted, “The people of Iran are finally acting against the brutal and corrupt Iranian regime. All of the money that President Obama so foolishly gave them went into terrorism and their ‘pockets.’ The people have little food, high inflation, and no human rights. The U.S. is watching!”

Trump was referencing the Obama administration’s unfreezing of certain Iranian assets and payment of a cash settlement related to a legal claim on those assets which was negotiated in the wake of the Iran nuclear deal. The money was Iranian money that had been frozen by the US following the revolution.

The US State Department lists Iran as a state sponsor of terrorism, although there is no evidence to suggest Iran used those funds directly to fund terrorism. Also, no evidence the money was used to enrich government officials.

Ayatollah Khamenei, in his stream of posts on Twitter implicitly compared the current demonstrations to Iran’s eight-year war with Iraq in the 1980s when the United States, its European allies; the Persian Gulf monarchies of Saudi Arabia and the United Arab Emirates backed the Baath Party government of Saddam Hussein against Tehran.

According to the New York Times, the initial spark of frustration appears to have been a leaked proposed government budget. The leak, released last month by President Rouhani revealed for the first time secret elements of the budget, including details of the country’s religious institutes. Protesting began Thursday in Mashhad and have since expanded to several cities, with some protesters chanting against the government and the supreme leader.

As a result of the leak, Iranians discovered billions of dollars were going to hard-line organizations, the military, the Islamic Revolutionary Guards Corps, and religious foundations that enrich the clerical elite. At the same time, the budget proposed to end cash subsidies for millions of citizens, increase fuel prices and privatize public schools.

Unemployment for young people, half the population — runs at 40 percent, according to analysts. Meanwhile, Iran has spent billions of dollars abroad in recent years to extend its influence in Iraq, Syria, and Lebanon.

Telegram, a social media messaging app used by over 40 million Iranians, blew up with angry comments.

During the challenge to Iran’s clerical leadership, the first since 2009, the death toll has risen to 21, with one member of the security forces reportedly killed Monday. Police are said to have arrested more than 450 protestors.

Musa Ghazanfarabadi, head of Tehran’s Revolutionary Court, warned protestors on Tuesday that those arrested would face harsh punishment saying the detainees will be put on trial starting the ringleaders who would face serious charges including “moharebeh” — an Islamic term meaning warring against God — a punishment which carries the death penalty.

According to Deputy Interior Minister Hossein Zolfaghari, 90 percent of the detainees were under 25 years of age and exhibiting severe frustration from the economic situation and lack of social freedoms.

Mohammad Baqer Nobakht, a government spokesman, said in a news conference that both protesters and the security forces should follow the law. “People have the rights to protest, but there is a difference between demonstration and riot…Even those who are confronting the rioters should act within the framework of the law.”

Rouhani refrained on Monday from accepting the responsibility of problems raised by protesters, and he blamed his predecessor and also Iran’s long-time adversary, the United States for the government’s shortcomings.