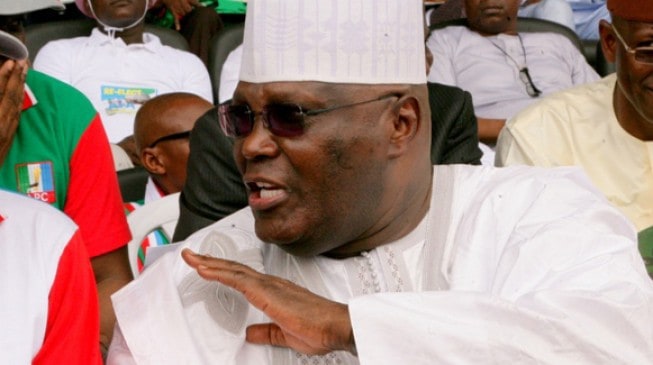 Former Vice President Atiku Abubakar has been accused of being the principal backbone of the Fulani herdsmen terrorizing Nigeria.
The Fulani herdsmen have been the current threat in the country with several people killed lawlessly.
In a recent attack, no fewer than 50 persons were killed in Benue state with several communities attacked at the same time.
The development had left the citizenry and stakeholders in apprehensiveness.
The Northern Elders Forum has accused the former Vice President Atiku Abubakar of being the backbone of the group terrorizing the country.
The chairman of the Northern Elders Forum, Mr. Unongo Paul, said Atiku sponsors the dominant and recognized group among the herdsmen, Miyetti Allah Cattle Breeders Association of Nigeria.
According to him, the former president has been the primary financier of the group for over time, thereby sponsoring and equipping different Fulani youths with arms for political purposes.
“Atiku is the major sponsor of Miyetti Allah in this country. He has been the major force behind their various deeds, and his major reason is to become Nigeria president. I am also aware that he wants to create a problem for Buhari.
“He finances Miyetti Allah, and he is a prince of Tiv Court because he was given a traditional title.
“The establishment of these people is very enormous and they have big men among them who sponsored the herdsmen with arms to kill around the country, and I wonder what the government is doing over the case.
The northern leader also said he got the confirmation of his statement from Atiku himself when they were a close ally.
The northern leader also blamed President Muhammadu Buhari for his negligence over the incessant killing by the Fulani herdsmen.
He said the president had remained too silence over the issue, adding that the group may grow to become another worrisome issue in the country like Boko Haram.
“The President though may not be happy about the killings by the Fulani herdsmen, but the fact is that he was not told the truth about the issue at the right time. He has been deceived over the issue.
He added that it is glaring that the anti-gracing law enacted by some states in the country is the major problem of the Fulani herdsmen.
Meanwhile, the former vice president Atiku Abubakar has debunked the allegation against him.

In a reaction conveyed by his media aide, Mr. Paul Ibe, the former vice president said he was not in any way a member of Miyetti Allah group
“Like I have told other pressmen, the claim by Chief Paul Unongo was totally false. Though Atiku is a proud Fulani man, he is not in any way connected with Miyetti Allah. Waziri Atiku Abubakar is not a tribal personality. He is a lover of everyone and every tribe in the country. He has also grieved with Benue people on the sad incident”.
Meanwhile, more groups in Nigeria have reportedly called on the president to declare the Fulani herdsmen a terrorist group like Boko Haram. Among the group that made the call recently was Christian Association of Nigeria.