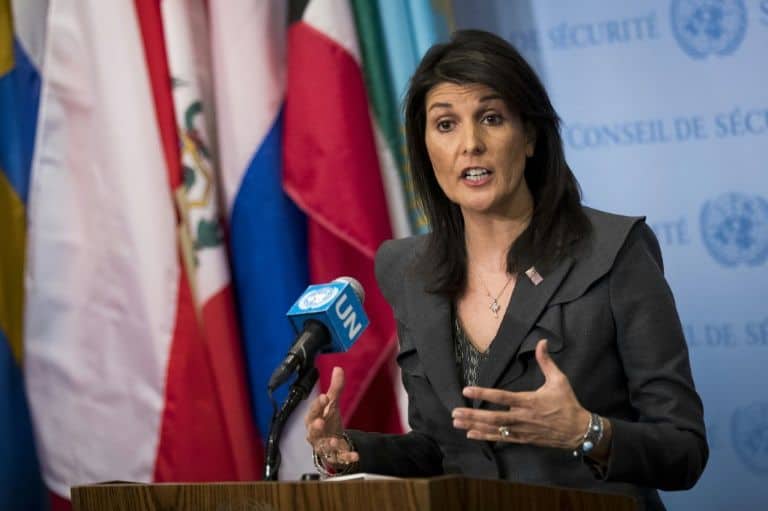 US ambassador to the UN Nikki Haley

The US ambassador to the United Nations sharply denounced the Iranian government’s crackdown on protesters, as the Security Council met in an emergency session to discuss human rights in Iran.

But others on the Security Council were quick to dismiss the US concerns as hypocritical, casting doubts on the Americans’ motivations.

“Let there be no doubt whatsoever: the United States stands unapologetically with those in Iran who seek freedom for themselves, prosperity for their families, and dignity for their nation,” US Ambassador Nikki Haley said this afternoon. “We will not be quiet. No dishonest attempt to call the protestors ‘puppets of foreign powers’ will change that. The Iranian people know the truth. And we know the truth. They are acting of their own will, on their behalf, for their future. Nothing will stop Americans from standing in solidarity with them.”

She said that America supports the protesters in their demands on the Iranian government: “Stop the support for terrorism. Stop giving billions of our money to killers and dictators. Stop taking our wealth and spending it on foreign fighters and proxy wars.”

The meeting was unusual – the Security Council does not usually discuss human rights, and many countries, most notably permanent members China and Russia, had opposed the meeting from taking place. Some member states had talked about holding a vote to block the meeting from even being held. However, several diplomats said that in the end, member states were hesitant to directly oppose the United States, which had pushed for the meeting. Instead, they opted to make their meeting open and on-camera, so that their positions were all on the record.

The Russian ambassador argued that the situation in Iran is an internal matter and not something that the Security Council, which normally deals with threats to international peace and security, should take up.

“Let Iran deal with its own problems,” said Ambassador Vasilly Nebenzia. “You are dispersing the energy of the Security Council, instead of focusing on dealing with crisis situations. You are proposing that we interfere in the internal affairs of a state.”

He jabbed at the US’s own human rights record, reminding the Council that America has its human rights concerns: “If we follow your logic, we should have meetings of the Security Council after the events in Ferguson, Missouri, or after the dispersal of the Occupy Wall Street protests in lower Manhattan.”

And he added, “The real reason for convening today’s meeting is not an attempt to protect human rights or protect the Iranian people, but rather to continue to undermine the JCPOA.” The JCPOA, or Joint Comprehensive Plan of Action, is the international agreement regulating Iran’s nuclear program. US President Donald Trump has repeatedly denounced the deal and threatened to scrap the agreement.

France, which holds a permanent seat on the Security Council and usually sides with the US in debates, today stressed the importance of maintaining the nuclear deal with Iran. The French ambassador, Francois Delattre, also argued that Iran’s human rights situation is not an issue for the Security Council, saying, “It is up to the Iranians, and the Iranians alone, to pursue the path of peaceful dialogue… However alarming the events of recent weeks may be, they do not constitute a threat to international peace and security…We must be wary of any attempts to exploit this crisis for personal ends. Change in Iran will not come from without, it will come from within.”