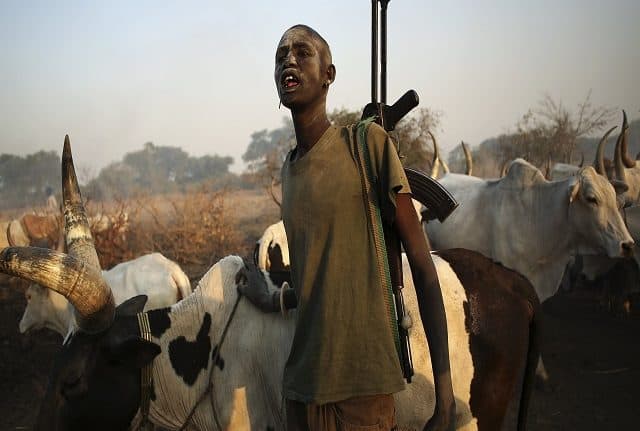 Fulani herdsmen allegedly stormed the camp of the Mobile police officers who were stationed at Awashuwa village.

More tension is currently growing in Nigeria over the uprising of Fulani herdsmen who have embarked on the killing of citizens across the country lawlessly.

The group, which is fast becoming a terror in the country again struck in Benue state with the killing of some police officers that were deployed to the state to protect lives and properties.

Recall that the dreadful group recently struck and murdered over 50 people in the state.

The development led to the immediate order of police chief and his men by President Muhammadu Buhari to relocate to the state to ensure adequate safety of the citizenry.

But in what looked like defilement of security agencies, the herdsmen stormed the camp of the Mobile police officers who were stationed at Awashuwa village.

According to reports, the Mobile police officers were under surveillance in Logo Local Government Area of Benue state.

Our correspondent learned that the herdsmen in the attack lay the police office an ambush and injured several of them before two of the police officers that were caught were slaughtered with knives.

A police officer among the victims who spoke over the incident, said, ” The herdsmen invaded the police camp in a “guerrilla manner”. After this, they slit the throat of two of our men that they caught”

“Our men came under attack at Awashuwa in Logo Local Government area of the state. The herdsmen who had tried to attack them earlier in the day ambushed them, but they were repelled. Two of our men were killed, and their rifles were taken away.”

Meanwhile, Benue state governor, Samuel Ortom has met with President Buhari on the incessant killing by the herdsmen in his state.

Ortom, in Aso rock villa, asked the president to come to the aid of the citizens of the state in the hands of the herdsmen.

The Nigeria Inspector General of police, Ibrahim Idris, has vowed to bring to book the people behind the incessant killing in Benue state.

Idris on his arrival at Makurdu, Benue state capital on president’s order, told Governor Ortom that effort would be put in place to ensure that killers of over 70 citizens will be brought to justice soon.

He said no fewer than three counter-terrorism police unit had been deployed to the state.

Meanwhile, Governor Ortom had called on the IGP to order his men for “immediate arrest of the leadership of Miyetti Allah Kautal Hore for peace to reign in the state.”

According to Ortom, “The attackers are camped in Tunga, Awe local council of Nasarawa state.”

However, in what seemed like the assurance of hope for security in the country, the presidency had told the citizenry that the government was up to the task of protecting them.

Special Adviser to the President on Media and Publicity, Mr. Femi Adesina, on his twitter handle, said “This government does not lack the capacity to protect them. This government will protect Nigerians.”

Adesina also added that eight people have been arrested in connection with the Benue killing.

“They (the suspects) will have their days in court, and if they are found guilty, the law will take its course. So, I want Nigerians to be assured that the law is there,” he added.