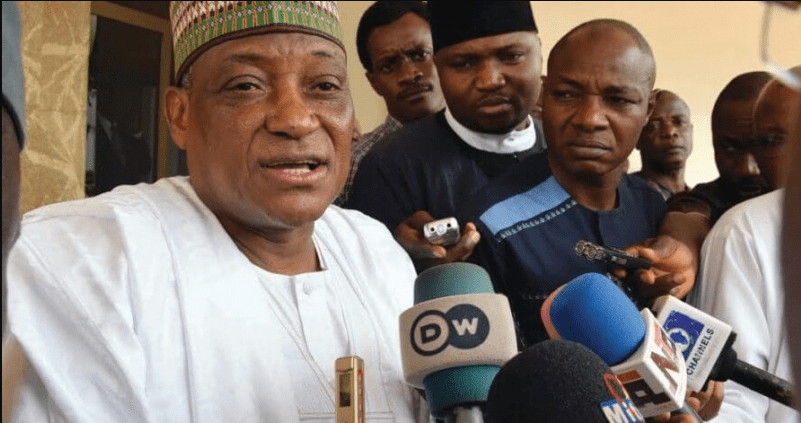 Nigerians have lampooned the Minister of Defence, Brig.-Gen Mansur Dan-Alli (rtd), over his comment on the recent killing in Benue state while demanding his sacking.

Dan-Alli had, in his comment after a Security Council meeting in Abuja, attributed the killing in Benue state to the Anti-Open Grazing Law enacted by the state.

No fewer than 73 people were killed early in the month when suspected Fulani herdsmen attacked some communities in Benue state.

Benue State Governor Samuel Ortom, who remarked on the comment, said it was unfortunate that President Muhammadu Buhari is being surrounded by a set of people that could not give him quality advice and also proffer solution to the security challenges facing the country.

Ortom said Dan-Ali’s statement, which asked Nigerians to accommodate foreigners who illegally enter the country to cause problems,  was an “insult to the collective leadership and sensibility” of the people of Benue and the country at large.

He described the minister’s statement to be tantamount to dancing on the grave of the innocent victims who were massacred during the gory attack.

The governor demanded an unreserved apology from the minister, stating: “This is provoking. It means the minister is dancing on the grave of innocent people who were murdered, slaughtered by these terrorists in the state on January 1. I am convinced to say that the people surrounding Buhari are the wrong set of people.

How can a minister of the Federal Republic of Nigeria come out to encourage our citizens to do an illegal thing by telling them to accommodate such people.”

He added that “As a state, we are ready to accommodate those who are genuine and who come to our state legally, whether foreigners or not, to do business. But if you are in Benue, you must respect the laws of the land.”

Ortom maintained that it was becoming clear in Nigeria that immunity, that was supposed to be the prerogative of the President and state Governors, has now been extended to “killer herdsmen” and even “cattle,” making them untouchable, adding: “Cattle in Nigeria now have more immunity than humans. This is very unfortunate.”

Also reacting, Benue State Chapter of the All Progressives Congress, APC said Dan-Ali’s comment was a disgrace to democracy, calling for the resignation of the minister.

State Chairman of the APC, Abba Yaro,  who demanded an apology to the state, averred that the statement was a “flatly ridiculous absurdity” and public disgrace.

“By this singular utterance, the Minister of Defence, Col. Muhammad Mansur Dan Ali (rtd) has inarguably displayed incontestable lack of the required sensibility and capacity to serve as Defence Minister in a country of over 180 million people with over 300 ethnic nationalities.

“As an integral part of the country, Nigeria and as a State that gave President Muhammadu Buhari an edge in the 2015 general elections, we demand that Col. Mansur Dan Ali (rtd) resigns his position as Nigeria’s Defence Minister immediately and tender an unreserved apology to the good people of Benue State and the country at large.”

The Party questioned the real motive behind Dan-Ali’s statement and demanded that he publicly explains to the party leadership why his reckless utterances should not be considered as a deliberate ploy to truncate the party’s victory in the 2019 general election.

“Through his statement, as an insider, Dan-Ali appears to have been contracted by the opposition to work against the APC. Minister Mansur apparently is one of those who is working against the unity of Nigeria and must be stopped now before he and others with such parochial, hateful, divisive and repulsive tendencies plunge the country into deeper crisis.In as much as we would not dignify Col. Mansur with obnoxious affronts, we would again want to inform him that he is not just an ingrate, but an unrepentant pathological opportunist who was in his farm working for the PDP when many of us toiled the nooks and crannies of this country to ensure victory for President Muhammadu Buhari in the election that brought him (Buhari) to power through which he (Mansur) is one of the biggest beneficiaries.”

In their reaction, leaders of ethnic groups in Benue State, including the Mdzough U Tiv, Idoma National Forum and Omi Ny’Igede, lambasted the minister for saying such and demanded his immediate resignation or sack.

In a statement signed by President General of Mdzough U Tiv, Chief Edward Ujege, the groups argued that the minister’s statement and a similar one credited to the Inspector General of Police (IGP), Ibrahim Idris, confirmed that top government officials are sponsors of herdsmen killings.

The IGP was said to have claimed that the killings were as a result of communal clash.

The statement by the Benue people reads, “The attention of the three main socio-cultural groups in Benue State: Mdzough-u-Tiv, Idoma National Forum and Omi Ny’ Igede, has been drawn to the reckless, highly provocative, unstatesmanly and divisive comments by the Minister of Defence, Mansur Dan- Ali on a Channels Television Programme on the sustained senseless and organised killings of Benue people by the Fulani Herdsmen.

The Minister in his comments attributed the unprovoked barbaric murder of innocent and defenseless children, pregnant women and the aged in Benue state to the enactment of the Anti-Open Grazing Law by the Government of Benue State.

We are extremely saddened by the public show of partiality, partisanship by the Minister of Defence whose oath of office requires of him to defend the territorial integrity and all peoples of Nigeria including the good people of Benue state from both internal and external aggression.”

It was added that “We hasten to ask this critical question: If the killings in Benue were as a result of the anti-Open Grazing law, to what will the Minister attribute the killings of farmers by Fulani Herdsmen and wanton destruction of farms and property in Adamawa, Plateau, Ondo, Edo, Nasarawa and other states of the Federation in recent weeks where such a law is not in place?

The Minister has by his statements on a national Television network clearly demonstrated that he has grossly compromised the oath of his office by openly endorsing the bloodletting in Benue.

The statement also said “We hasten to declare that there can be no justification to take human life under any circumstance in the manner the Minister shamelessly justified in the Television programme.

The Minister’s provocative statement, which comes shortly after an equally condemnable remarks by the Inspector General of Police, Alhaji Ibrahim Idris that the January 1, 2018, cold-blooded killings of over 70 people in Guma and Logo LGAs of Benue State, has reinforced our earlier held suspicion that the Fulani Herdsmen have been acting with the full backing of top government officials in the Buhari-led administration”

The group further demanded the following against the minister.

“We call for the immediate resignation of the Minister of Defence, Alhaji Mansur Dan-Ali, who has evidently compromised his office by failing to send the Military to Benue since the latest crisis started, while he was quick to advise the deployment of troops to other parts of the country.

Alternatively, we call on President to sack and prosecute the Minister of Defence for complicity in the murder of innocent Benue citizens. Should President Muhammadu Buhari fail to sack the Minister, we urge the National Assembly to immediately investigate the President’s role in the Benue killings with the view to possibly impeaching him if found wanting in the performance of his duties by failing to avert the killings of the Benue people after several complaints and official report by the State Governor, Samuel Ortom and the three socio-cultural organisations.

They also maintained that “We wish to call on the international community to wade into the gross violation of the right to lives of harpless Benue people and the unwholesome destruction of their farms and other means of livelihood.

We are grateful to the various socio-cultural groups across the country notably the Afenifere, Ohaneze Nd’Igbo, the South-South People, human rights and pro-democracy activists and organisations, religious groups, Elder statesmen, opposition political parties, state Governors, members of the National Assembly, Traditional Rulers, the Media and other well-meaning Nigerians, who have resolutely stood by us by opening condemning the genocide against Benue people.”