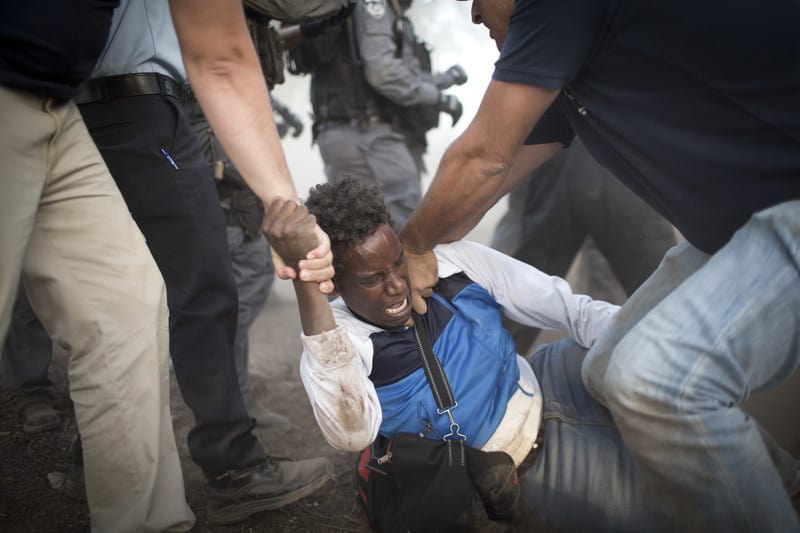 Nearing the thousands; Eritrean and Sudanese migrants along with failed asylum seekers rallied in the city of Herzliya on Wednesday protesting against a government plan to deport them. A political firestorm brews in Israel as government authorities have begun distributing deportation notices to tens of thousands of African refugees.  On Sunday 20,000 unmarried, male refugees were given two months to exit; the alternative is to accept $3500 and a one-way ticket to another country.

About 60,000 migrants, nearly all from Eritrea and Sudan, crossed Israel’s border with Egypt before the government erected a 130-mile barrier fence along the desert frontier in 2013. Many were fleeing persecution and violence.

Roughly 20,000 have already been expelled, according to the Israeli government. But some have lived for years in Israel and many works in low-paying jobs that many Israelis shun. The country has granted asylum to fewer than one percent of those who have applied and has a years-long backlog of applicants.

“At the core of the dispute is how Israel; founded as a home for persecuted Jews, integrates newcomers while preserving its Jewish character,” the Holocaust memorial Yad Vashem released in a statement on January 25th. Those who remain by 1 April face indefinite imprisonment under plans which have prompted outrage and protests in Israel.

In letters delivered on Sunday, the government told asylum-seekers they had 60 days to leave for an unnamed African country in exchange for $3,500 (£2,500) and a plane ticket.

A litany of professionals; pilots, doctors, writers, rabbis and Holocaust survivors condemned the mass deportations and called on the government to halt the plan; stating the deportations are unethical and would mar Israel’s refugee image for persecuted Jews. Even a group of Israeli rabbis launched an “Anne Frank-inspired” activist programme to protect African asylum-seekers facing forced expulsion. However, Prime Minister Benjamin Netanyahu has called the migrants “illegal infiltrators” and claimed their presence is a threat to Israel’s social fabric and Jewish character.  One government minister has referred to the migrants as “a cancer.” “We have expelled about 20,000, and now the mission is to get the rest out,” Mr. Netanyahu said.

In the letter, Israel’s Population and Immigration Authority told asylum-seekers they would be sent to an unnamed country with a “stable government” that has “developed tremendously over the last decade and has absorbed thousands of returning residents as well as migrants from various African countries.”

The Israeli government has refused to name the country publicly, but officials have indicated migrants would be sent to Rwanda. Many of those ordered to leave have expressed fear of being sent to the East African nation and said they would rather be sent to prison.