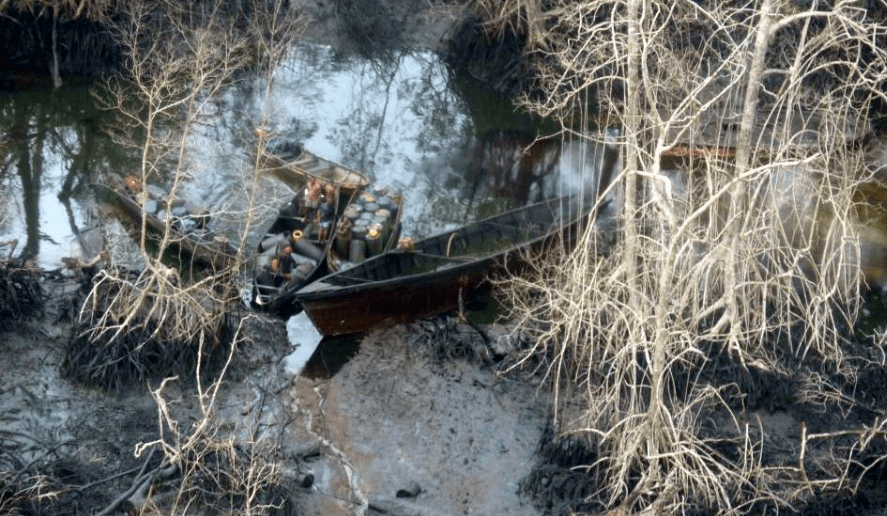 Fuel vandals have resumed operations in Arepo, Ogun State, South-western part of Nigeria, an investigation by Caracal Reports has revealed.

This latest twist to the fuel bunkering menace puts the publicized Federal Government efforts to curb the illegal activities in jeopardy, indicating that the President Muhammadu Buhari led administration may find it difficult to win this lingering war.

Following several years of scooping of fuel from pipelines and the killing of residents by the vandals, which are believed to be Ijaw indigenes, men of the Nigerian Air Force conducted a five-day intense aerial operation while men of the Armed Forces and other security operatives smashed the defense of the bloodthirsty vandals in August 2016.

The Special Boat Service of the Nigerian Navy led the ground assault against the vandals as they fired their way into the heart of the vandals’ empire where several innocent security men were killed and buried.

After the security operatives’ raid, thousands of 50-liters marked plastic containers, ammunition and other tools used for siphoning fuel were found and destroyed. Several men of the Armed Forces and the Nigerian Security and Civil Defense Corps were deployed in the area to prevent any surprise attack by the armed vandals.

The investigation also revealed that some of the armed security men, which launched its Operation (fire-for-fire) against the vandals, are still at the site as at the time of filing this report (February 6, 2018).

About 10 “Okada” riders were seen driving out of the area with two 50-liters or four 30-liters with petrol each every 30 minutes to their clients, who dispense to consumers across Ogun and Lagos States at N200 per liter or more, smiling to the bank, especially as the pains of scarcity of fuel bites harder on Nigerians.

Some of the “Okada” riders, who spoke with spoke with our correspondent in separate interviews, alleged that some men of the NSCDC supervise the operations of the vandals.

One of them, who simply identified himself as John, told our correspondent that some of the security operatives assist the vandals in carrying the containers loaded with petrol most times when some of the vandals have gone under the water.

He said, “They resumed operations last year during the fuel scarcity and nobody has been able to stop them. Most of the security operatives look the other way sometimes and also sell fuel to their clients.”

As far as Ms. Mary Ajoto, a resident of Journalists’ Estate, Arepo, is concerned, the federal government cannot curb the menace till cases of corruption among top politicians are no longer reported in the media.

According to her, whenever she challenged some of the vandals and security operatives, they argued

that, as long as politicians also fleece the nation in billions of naira, they would continue to bleed the economy by scooping fuel from busted pipelines.

“The vandals, who are largely from the south-south part of the country, believe the fuel pipeline is their own national cake, which they are not ready to abandon for now. The security operatives make matters worse because in most cases they aid the menace. In most cases, they also sell petrol at cheaper rates to their clients as they struggle with the vandals for clients–When an elderly man challenged them over their illegal operations, they almost shot at him as they fired their shots in the air to scare the old man.–They claimed that as long as they do not have access to government’s fund like the lawmakers in Abuja or state house, they will not stop making money from pipeline vandalism. We have reported to a nearby police station but nothing has been done to curb the illicit activities,” she said.

A resident of Magboro, Ogun State, Ms. Iyabo, is one of the clients of the vandals.

Iyabo suffered from the clampdown by the security operatives in January 2016, as the middle-aged woman was forced to sell one of her two three-bedroom flat bungalows, two cars and a plot of land within the community, to refund loans obtained from an undisclosed financial institution.

But today, Iyabo has bounced back as she has bought back most of the property she lost to the clampdown by the soldiers because she has started selling petrol scooped by the vandals.

She told our correspondent, who disguised as one of her patrons, that though she vowed not to sell petrol again when she was nabbed and beaten by some security operatives but changed her mind when she realised the operations of the vandals are supervised by men of the NSCDC and other security agencies.

“I don’t intend to stop selling petrol for now because I have several bills to pick at the end of the month. Since my husband has abandoned me and three children, I tried selling petty household items but couldn’t make ends meet– But since I have started selling petrol, I have recovered from the loss I incurred in January 2016 and there is no going back for now because there is huge demand for the product and most times we don’t meet the demands of our clients,” she disclosed.

Mrs. Mary Ojo is another client of the vandals. The mother of four, who is also a member of one of the Cherubim and Seraphim Churches in Magboro, started selling petrol in her neighbourhood along Abule-Oba, a town in Magboro, December 2017, when the fuel scarcity was at its peak.

According to her, Iyabo’s achievements (houses and cars), which she made from proceeds of the illegal business attracted her to the business. Not minding the risk involved, in terms of a fire incident or being nabbed by security operatives, Ojo has invested over N100,000 in the business and already made profit of over N150,000 within a month.

Findings revealed that the duo (Iyabo and Ojo) keep their goods in uncompleted buildings close to their houses and hide a 30-liters filled with fuel each in their kitchen. Our correspondent also found that both of them use their children between 10 and 14 years of age as sales personnel, exposing them to the danger of explosion.

When our correspondent asked them if they are aware of the consequences of exposing their wards to such danger, “I always ask them to use touch light while dispensing fuel to prevent an explosion. We have to use children to avoid being suspected by security operatives. If anyone comes around and requested for petrol, we usually deny selling because we know they are strangers. I have told my clients to call it ‘water’ whenever they come around,” Iyabo told our correspondent.

The Lagos State Commandant of the NSCDC, Mr. Gabriel Abaafi, disclosed that the Corps has been arresting every suspect and has been charging them to court.

He said, “Sometime last month, the Nigerian Navy handed over two suspects caught on the high sea to us and they are now in courts. At the Ikorodu area, four suspects were apprehended with petrol. At the Badagry area, we intercepted about 700 (25 litres each) kegs from five suspects. Yesterday (Wednesday), 90 kegs of stolen fuel were intercepted.”

Adding,“The corps will not rest on its oars until it eradicates oil theft and other forms of economic sabotage in the country.”

On the allegation levied against its men by the residents, Deputy Manager, Communications, NSCDC, Lagos State Command, Mr. Kehinde Bada, told our correspondent that the officials of the Corps do not engage in such menace because it is illegal.

“Our officials know the implications of engaging in illegal operations and that keep them away from such act. We have not received any report in that regard but we will investigate and get to the root of the matter. There is a military base in that area, which is controlled by soldiers, and that is enough to scare any vandal from the illegal business,” he said.